A Gallstone of a Year

I'm an early riser and, every morning at 5 to 6, I listen to Radio 4's 'Tweet of the Day'. It is a moment of quiet sanity before the usual trauma of the 6 o' clock news. By far my favourite presenter is Samuel West, the actor son of Timothy West and Prunella Scales, who recently triumphed as Siegfried Farnon in the remake of James Herriot's 'All Creatures Great and Small'. His descriptions of the bird calls are sheer poetry and this post's title is a misquote from his recent programme on the Eider duck. In it, he described the 80s as being 'a gallstone of a decade'. In his teens at the time, and worrying about the cold war, he decided that what he would choose to do in the event of a 3 minute warning, was feed some ducks. Speaking as someone who feeds the numerous ducks in our garden on a daily basis, I can only agree that as choice of final activities go, it's not a bad one. Incidentally, his description of the noise the eider duck makes was 'like a coven of Frankie Howerds, gossiping round the village pond'. Not only is this hilarious, but also uncannily accurate. You can listen to the call  here and judge for yourself.

2020, I think we can all agree, has been a bit of a gallstone as well - and having undergone a cholecystectomy many years ago, I feel quite qualified to make the comparison. I have noticed that my blog posts have become few and far between. This is not only because we have ventured out less and done far fewer exciting things during lockdown, but also because my mood has meant that I haven't had the inclination to write more. Today though, I am forcing myself. The camera is filling up and I want to clear it and start afresh.

Here then is a photographic representation of the past few weeks chez nous. It's not terribly exciting I'm afraid, but it's the best I have at the moment:

Trying to capture a photo of the green woodpecker on the bird feeder. As you can see, I failed miserably! 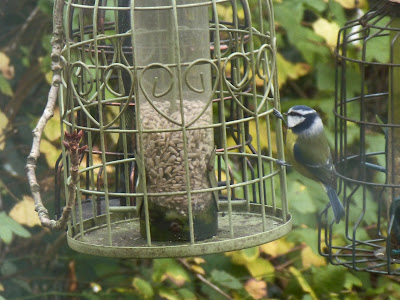 Glazing my 'Autumnal Man'. I'm reasonably happy with it given the glazes that were available and, if nothing else, at least it emerged intact from the kiln. I have named him 'Mabon' after the pagan festival that takes place around the Autumnal equinox. It's all about reaping what you sow - both literally and figuratively. 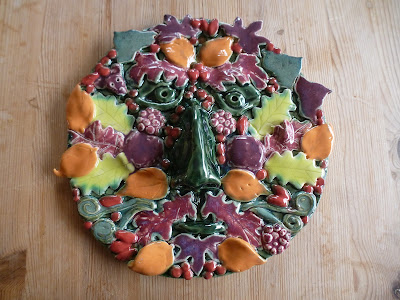 A Sunday walk around Whitchurch: 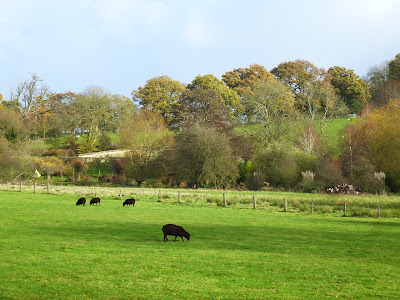 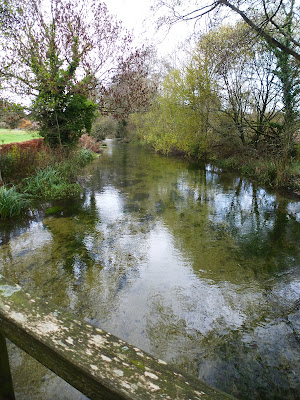 Candle making on Diwali. The timing was purely coincidental. The pots were the first items that I threw on the wheel, so they wobble a bit! The mug celebrates the coronation of Edward VIII, which of course didn't take place. I picked it up at a charity shop for £1; not too bad for a bit of history. 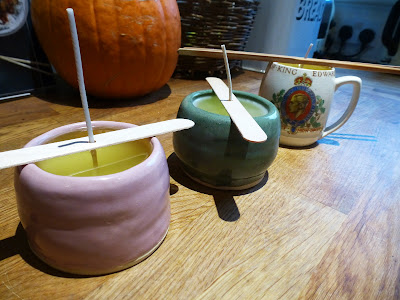 Another walk and picnic, this time around the Durrington Walls settlement near Woodhenge. 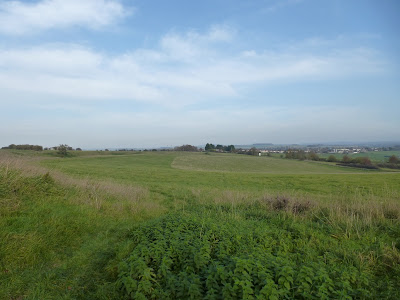 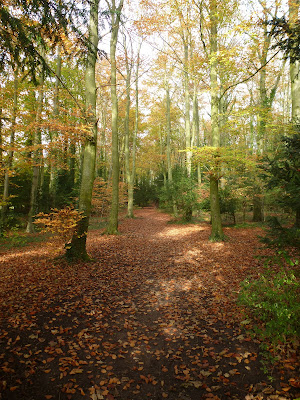 The 'Cuckoo Stone'. In the Bronze Age the cremated remains of 3 people were buried in pots near here. 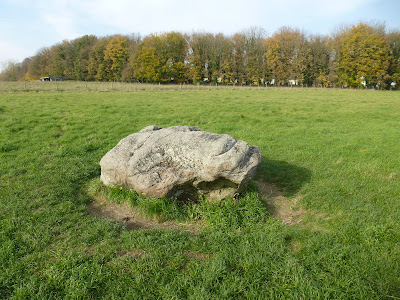 A stonechat. I might like listening to 'Tweet of the Day' but I'm no expert when it comes to bird identification and had to look this one up when we got home. 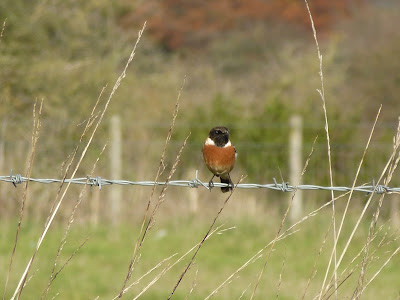 Woodhenge. A timber monument with 6 oval rings of posts, built around the same time as nearby Stonehenge. Like Stonehenge, they are broadly aligned with the direction of midsummer sunrise and midwinter sunset. Pottery, tools and human remains were found nearby. The posts were of varying sizes and their places are now marked by the concrete pillars seen below.
'Zombie Land' socks have been finished, blocked and worn. 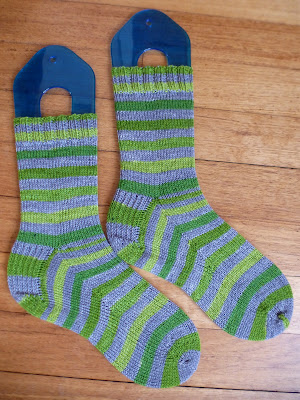 A little premature, as usual: 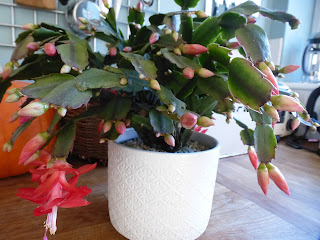 I didn't carve a pumpkin for Hallowe'en this year - part of that general Covid malaise again - but we did enjoy pumpkin soup and roasted seeds. 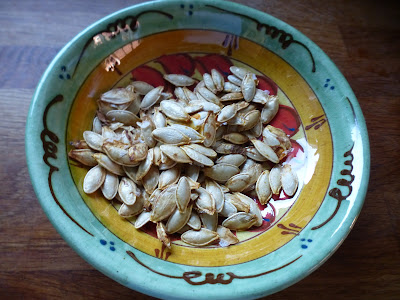 I managed to fit in a visit to Bristol to see E just before the second lockdown was announced. We stocked her up on provisions from the local zero-waste shop: 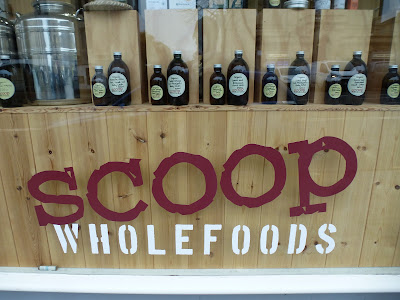 My orchid has been flowering its little heart out for several months now. There was a period when I was given quite a few of these as gifts and managed to kill them all with monotonous regularity. That was before I realised that they quite like the conditions in the bathroom and, since then, we haven't looked back: 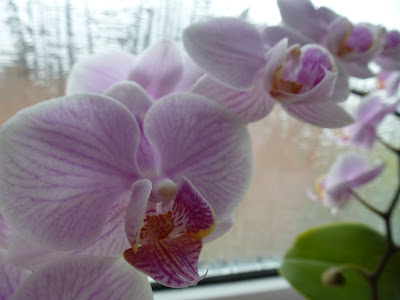 Re-reading my favourite book. They didn't even manage to spoil this in the 'kill a book' sessions at school. Does anyone else remember those wrist-slashingly awful lessons, where everyone took a turn to read a page? Harper Lee's tale makes me both laugh and cry, and I was both bemused and dismayed to learn recently that it has been removed from the Mississippi school reading list after an official claimed that 'the language made some people feel uncomfortable'. As far as the rating in my book journal goes, there aren't enough stars in the sky. 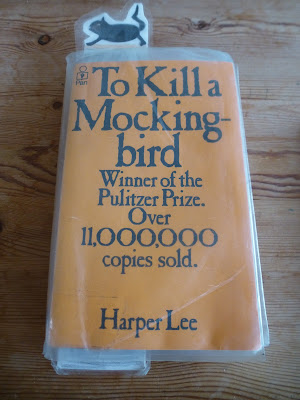 Walking along the Ridgeway on a beautiful Autumn day: 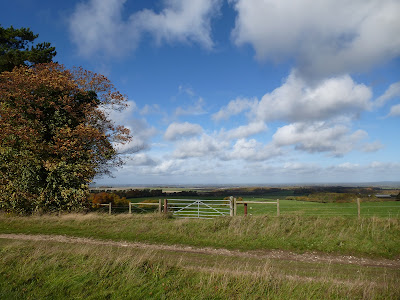 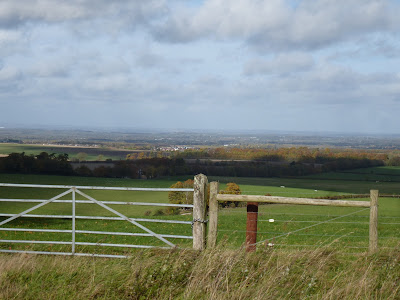 A walk closer to home at Donnington Castle: 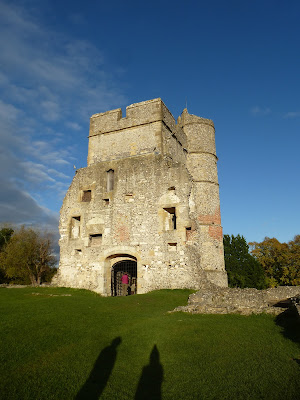 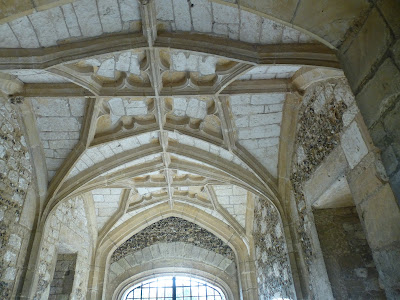 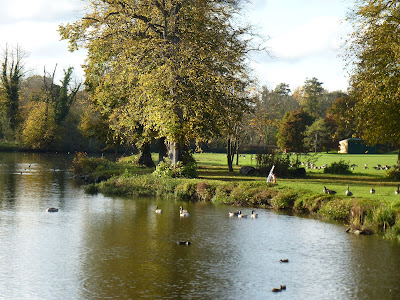 Making vegan banana bread. It keeps surprisingly well and has accompanied us on many a picnic. Recipe to be found here. 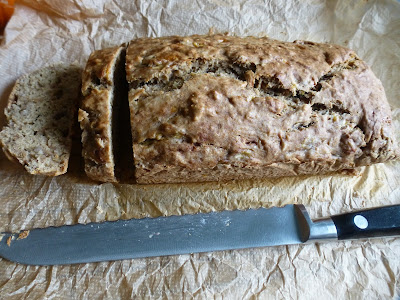 A very blurry photo of a deer in the garden. There was a tiny fawn too but it was rather elusive. A few weeks ago our neighbour came round to ask if we had an injured deer in our garden as she had spotted one and called the RSPCA. We hadn't, but have seen it since. Somehow it has lost a rear leg but is managing to get about and feed itself, so I am hoping that it survives. Apparently, muntjac are considered pests, so I imagine that if the RSPCA had captured it, they would not have released it back into the wild and, instead, it would have been killed. As it seems to be managing, and no longer appears to be in too much pain, I hope it's left well alone. 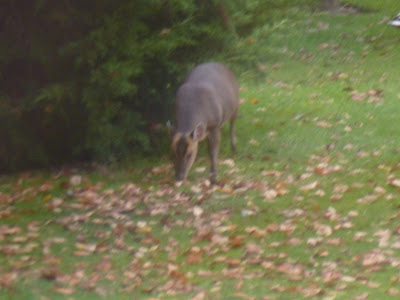 Finally, one of my favourite teas. Rather a strange photo I know, but these were the teabags that E used to get from the dining room when she lived in Wills Hall in her first year at uni. We haven't seen them since, but she found an old one recently when tidying out her drawers and gave it to me. As it was the last one, I kept it for a while and used it when I had a quiet moment to savour it properly. It tasted of Wills. 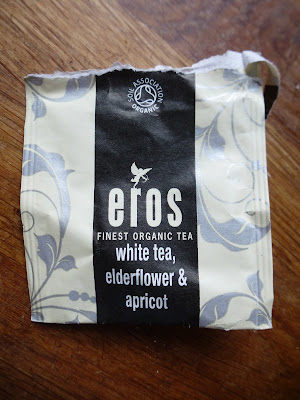 Well, that's my camera all clear. One more week of lockdown to go before we revert to the tiered system. Stay well and cheerful, my friends. May your tier be low in number and any gallstones few and insignificant.
Toodle pip for now. x
Posted by VeggieMummy at 00:36