Today I'm stuck indoors waiting for our new bathroom 'vanity unit' plus basin to be delivered. It sounds very grand for what is essentially a cupboard. The delivery time is specified as anywhere between 7:30am-5pm, so quite a range really. I've decided that it's probably a good opportunity to muck the house out but, before I start on that joyful task, I thought I'd take half an hour to drink my breakfast smoothie and clear my camera. Last time I did this, I managed to knock said smoothie over, spilling forest berry coloured fluid all over the carpet, so I'm being extra careful today!

Not a lot has gone on in the past few weeks. I drove L and all her belongings to her new flat in London. This was easier said than done. Not the actual driving - that went surprisingly smoothly, it was the parking that was the issue. Finsbury Park seems to be mostly permit holders only, so we had to park illegally whilst we threw everything into the hallway and then drive to the park itself and walk back to sort it all out. We had lunch in the little cafe and then walked around the lake. It was lovely and we were surprised to see 2 cormorants (at least I think that's what they are) fishing. There were terrapins too, which were so still that initially we thought that they were models. Apparently, some London parks are having to remove terrapins from their ponds as they can attack the ducklings. These didn't look active enough to catch anything, but maybe they lull things into a false sense of security before pouncing. 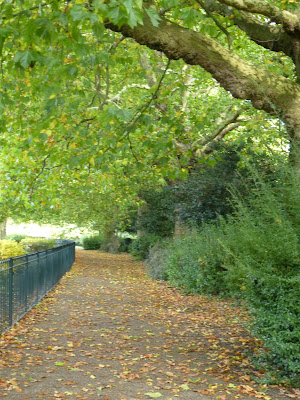 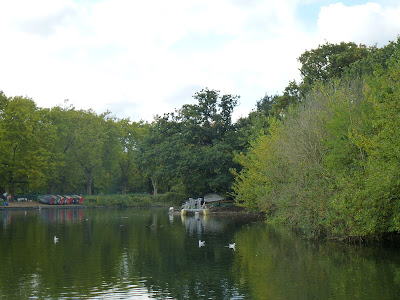 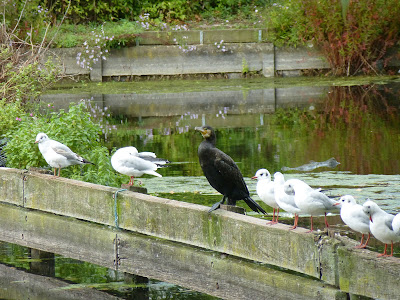 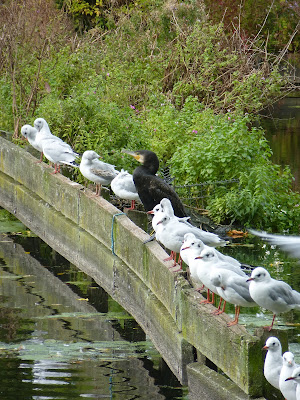 Last week was our local appley jamboree. Actually, I shouldn't poke fun at it, I just can't help comparing it to the Apple Day at the Botanical Gardens in Cambridge which was magnificent. This year, ours had grown to 2 stalls and a juice pressing bar in the market square! To be fair, the pressing was actually quite fun to watch and I'm sure that the local pigs enjoyed the left over pulp. 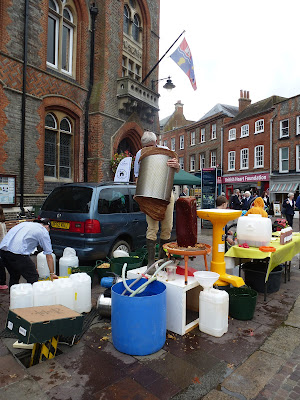 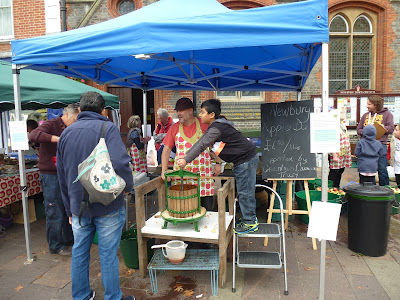 The market place was also home to a French Market last week. I had a little pootle round and everyone was very friendly but I didn't buy anything. The cheeses looked yummy, but R and I have turned vegan for 'Stoptober', so I resisted those. I was also quite tempted by their baskets, but closer inspection revealed that they were made in Madagascar which, despite their history, didn't seem quite in the spirit of the thing. 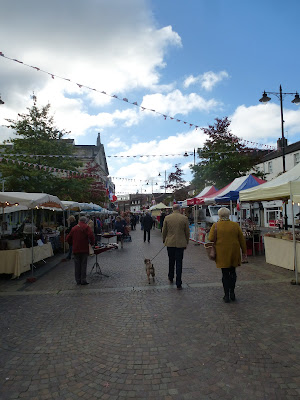 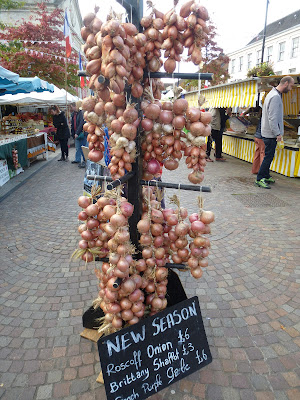 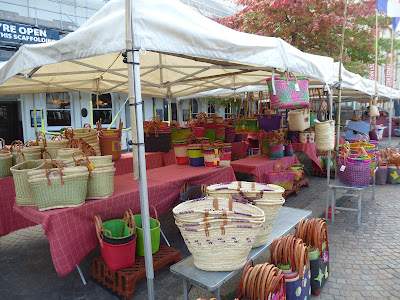 R and I went to the cinema to see a screening of Hamlet starring Benedict Cumberbatch. Did anyone else catch this? It was brilliant. A few years ago, we took the girls to Stratford Upon Avon to see David Tennant in the role and I though that his performance would take some beating, but this was even better. I especially loved the part where he is dressed as a soldier, playing in a fort. The only slight dampener was when we realized that there was a school trip from the girls' old school there and we found ourselves sitting next to their English teachers. I had to try very hard not to fidget! 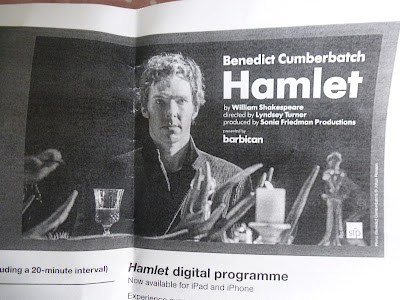 Last weekend, R and I went for a little brum in Bridget the Midget. We didn't have a destination in mind, but suddenly found ourselves driving by the Bombay Sapphire Gin Distillery. Well, it would have been rude not to have gone in! 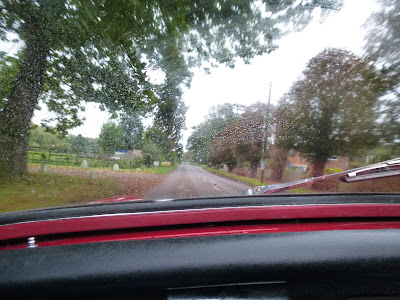 It was actually very popular, with far more people learning about gin on a Sunday afternoon than you would have expected. For the admission price, you received a tour of the distillery, including the glass houses where they grow examples of the botanicals used, and a gin cocktail in the bar, made for you personally to match the smells which had appealed to you most in the aroma testing room. 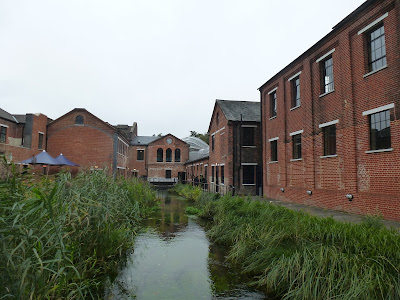 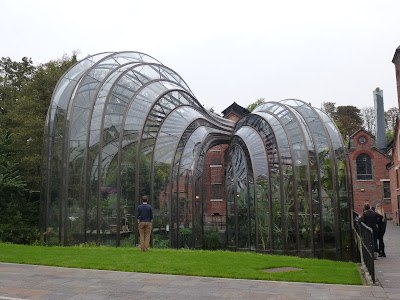 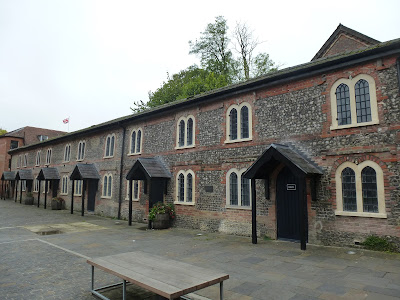 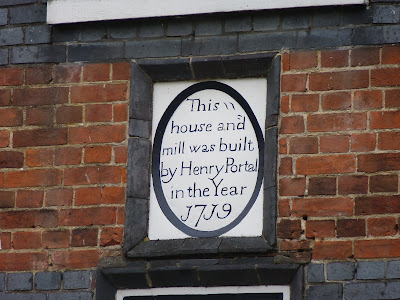 In the aroma room, you picked up a card and had to punch between 3 and 7 holes in it by the names of the botanicals that you preferred. R could only find one that he actually liked, although he was rather partial to the smell of the hand gel that we had to apply before entering the distillation room! 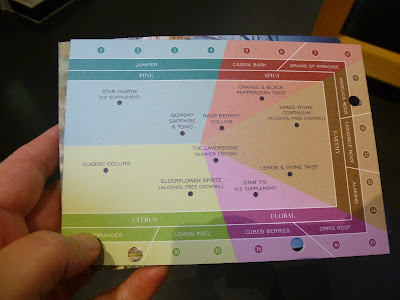 Here are our cocktails. Mine was a mixture of gin and prosecco and R's was gin, lemon and something else which I forget now. Whilst it was quite fun smelling the botanicals, we both agreed that we would have preferred just an ordinary G&T! R only had a taste of his anyway as he was driving. 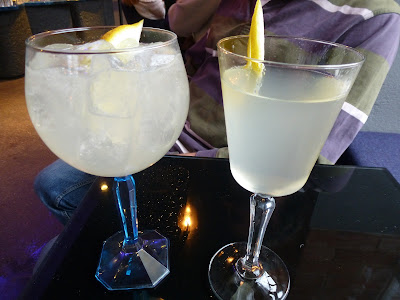 Well, that's all for this week. Sadly, there's no sign of the delivery van yet, so there's nothing else for it - I'll have to get the vac out and make a start! Have a good week.
Toodle Pip for now. x
Posted by VeggieMummy at 02:13 8 comments: