What Ho, Old Beans! Did you all enjoy the thunderstorm and much needed rain last night? I do love a good storm. My mother was terrified and used to hide in the cupboard under the stairs, where she couldn't see the lightning and the thunder was more muffled. It apparently reminded her of bombs during the war. My father, determined that I shouldn't inherit her fear, used to make me a hot drink and we would sit at the window watching it all. I think I love them so much now because I associate them with that sense of cosy. Anyway, the garden was desperate for some rain and it smells beautiful this morning; all fresh and green.
I've had quite a busy couple of weeks. I finished a number of wips that I had on the go, had a trip to London, did a stained glass workshop and decorated the kitchen. Actually, it's not quite finished yet - I still need to paint the cupboards, but I'm giving myself a break over the weekend before I start those.
Here are some photos that I took along the way: 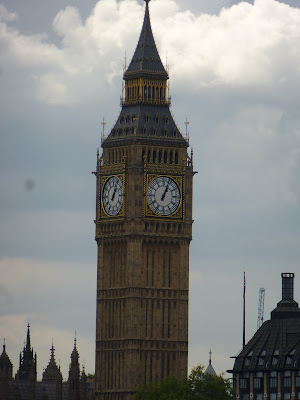 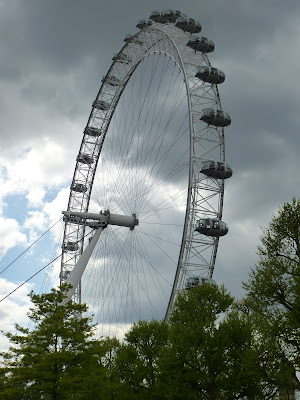 My trip to London was to see the 'Adventures in Moominland' exhibition at the Southbank Centre. I'd had my eye on this for a while. but tickets at a convenient time were hard to come by and I wanted to go during term time as I thought that there would be fewer children. I arrived about half an hour early and sat down for a little bit of sock knitting whilst I waited. Just then, hundreds of children arrived, all wearing little yellow reflective jackets. They were from several different schools and the din was making my ears bleed. I was kicking myself for not even thinking of school trips and was wondering whether to abandon the idea entirely, being too embarrassed to go as a lone adult. In the end, I plucked up my courage and, at my appointed time, went to the meeting place. What a relief - the children were apparently there for a concert at the Royal Festival Hall and, of the 11 of us booked for the Moomins, 9 were adults and 2 were toddlers.
The exhibition itself was great fun. We entered through a giant book and then all channeled our inner child as we sat in tents, walked through 'forests' and explored the Moomin house and Tove Janson's studio, all the while being accompanied by a guide and an audio description by Sandi Toksvig. Some of the exhibits were on loan from a museum in Finland and included many original illustrations and Tove's paint palette. It was a fun hour and it seemed strange when we finally emerged back onto the South Bank. 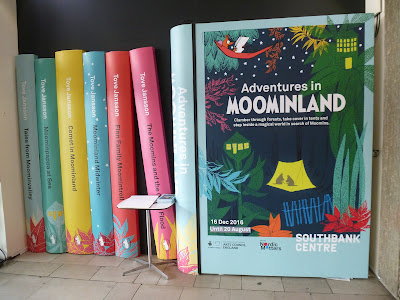 I may have bought a souvenir tote bag to remember the occasion! It's currently housing my 'Cosy Memories Blanket' - I think Moominmamma would approve. 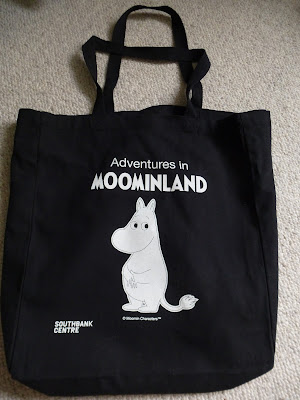 Other happenings this week:

We have been seeing lots of deer back in the garden. There is a baby one too, but every time he/she is there pronking around, my camera isn't to hand. 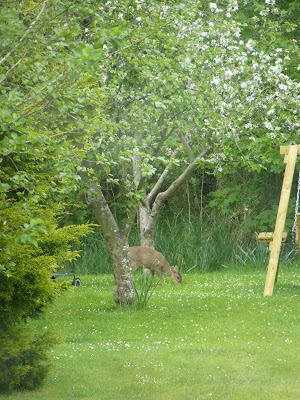 I finished my 'Hermione's Everyday Socks'. These seemed to take me quite a while and, to be honest, I wasn't really feeling the joy. I've come to the conclusion that I'm a bit boring when it comes to sock knitting: as far as I'm concerned, you can keep your fancy patterns, I just love a nice, plain old vanilla sock. 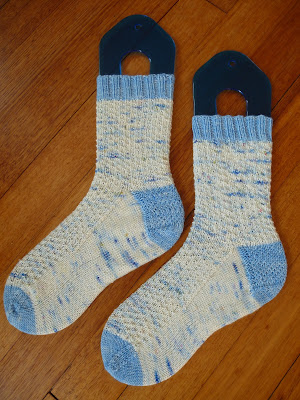 I also finished my 'Random Acts of Colour Shawl': 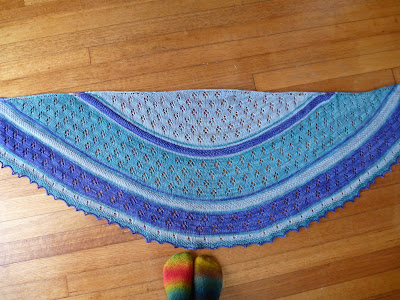 ........ and my hat for running on cold mornings. The yarn is 'Mrs. Tiggywinkle' by Elm Tree yarns. The black flecks are supposed to represent her spines. 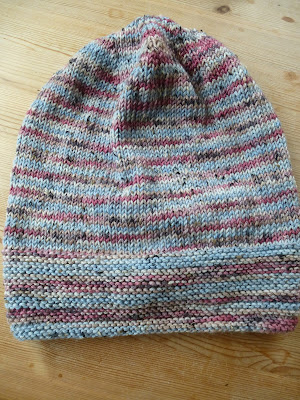 We are currently having an 'Open Studios' month, where local artists open their work spaces to visitors (Is this a national thing or just in our area?). Several are running free/cheap workshops, and I had signed up for a stained glass day at a local village. Amanda who ran it has her studio on a farm. There were 6 of us and we took along lunch, saw some week old kittens, and spent a merry day copper foiling a suncatcher. Here are some photos of Amanda's studio: 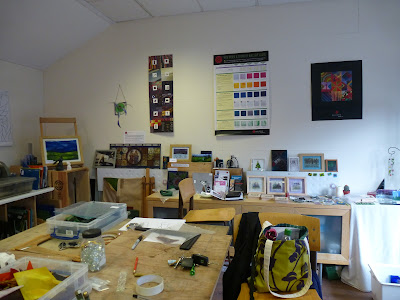 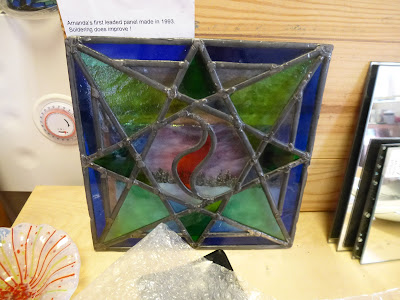 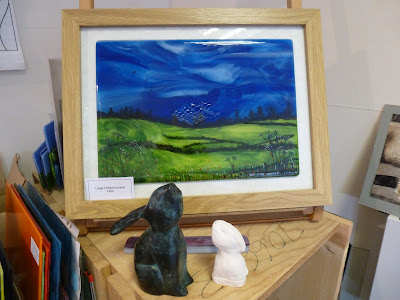 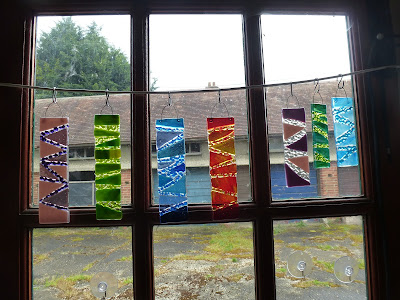 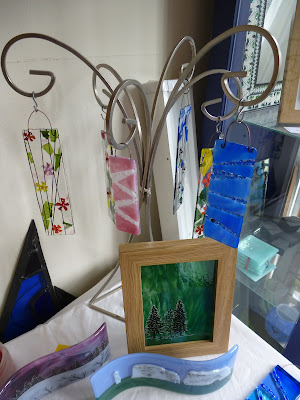 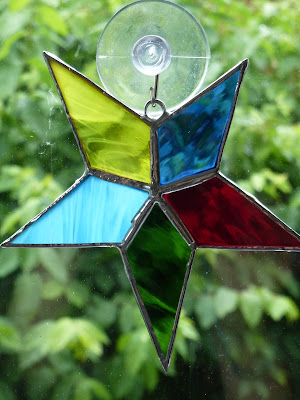 I have done a bit of stained glass before. Once to make a panel for over our kitchen door (see photo below) and once when I took L on a post AS level treat. I'll post photos of our finished objects another time.
Finally, I've seen far too much of this over the past few days: 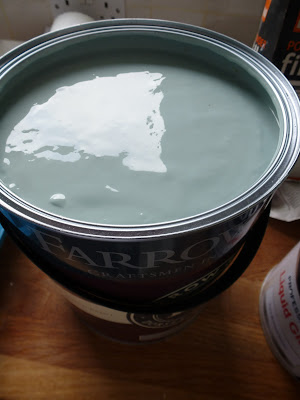 Why does it always seem to take far more coats than you think it will? As for masking tape - I spent ages masking everything, only to discover that the paint either seeped beneath it or it pulled the paint off during removal. Note to self - don't believe R when he says that the cheap sort will do! The colour is Farrow and Ball's Dix Blue and it actually looks a bit darker in the photo than in real life. As I say, the cupboards still need doing, but I'm psyching myself up for those. It is such a relief not to have to climb over all the kitchen paraphernalia which was dumped in the hall whilst I painted. I never realized before how many racks etc. we have, and the dirt! I'm ashamed of how filthy it all was. Not now though. For the moment anyway, it's all sparkly clean and fresh.
Poor old Hamish, who usually sleeps in the kitchen, spent many a day in the garden and had to spend the night in the downstairs loo to allow the paint to dry without him moulting all over it! It was either that,or stay outside with the owls and the foxes. Talking of which, a fox wandered past our patio doors the other evening. I initially thought it was a cat and went to have a look. It paused in the hostas by the back door and stared at me thoughtfully, before sauntering off behind the shed. I called to R who immediately ran out to check the chickens. I hadn't even given them a thought, I was just mesmerized by how beautiful the fox was. 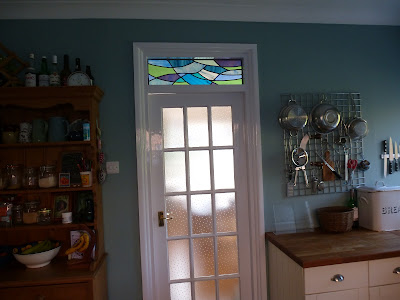 Anyway, I'm a little high on paint fumes, so I'll let you go. I'm off to get some fresh air and do a little post-rain weeding in the garden.
Toodle Pip for now. x
Posted by VeggieMummy at 01:29 12 comments: