Portraits, finished objects and more fun than a sane person should have with an advent calendar!

A couple of weekends ago, I hopped on a train to Exeter to see my friend, S, and to visit the BP Portrait Awards 2017. The exhibition was quite small - just a couple of rooms of paintings - but we thoroughly enjoyed it. Lots of the paintings were so good that they could well have been photographs, however, that didn't necessarily mean that we would have wanted them on our wall! That was our personal method of judging - would we be happy to give the painting house room. Surprisingly, we were in complete agreement and out of the whole exhibition, we narrowed it down to 2 and a half! The half will become obvious in a moment.
Anyway, here are the 2 we liked - I'm afraid that I can only recall that both were named after the sitter and one, I believe, was the artist's niece and the other the artist's granddaughter. I should really have taken notes! 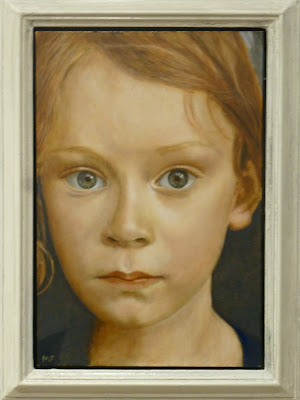 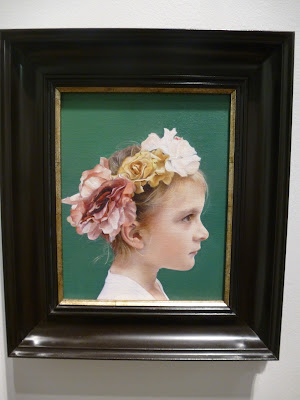 Here is the half! This one was a portrait of the film director Ken Loach. Apart from the background colour, neither of us cared for the portrayal of Ken, but both of us loved the kestrel in the corner - representative of his film 'Kes'. There was also a 3 legged dog in the opposite corner, which apparently appears in a few of his films, but it was the kestrel that stole our hearts. 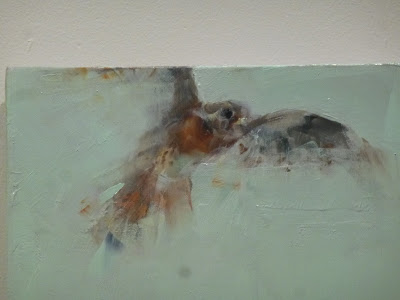 The painting below was the winner and neither S nor I could work out why. According to the judges' comments, the mother's face showed love and tenderness etc. We thought that it showed anything but. To us, she appeared to be looking at her child with complete indifference and boredom; a kind of 'Get on with it' expression. Anatomically, it didn't seem to be the best either. Having said that, what do we know?! 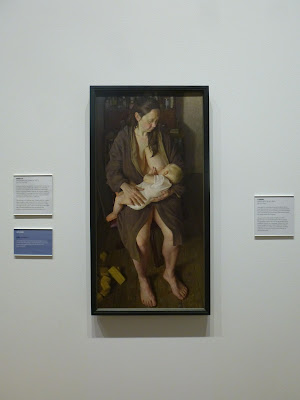 After pottering round the exhibition, we enjoyed a delicious lunch at a Lebanese restaurant. We shared a mezze platter, with S eating the grilled halloumi and me eating the felafel - still going, and, yes CT, I'm finding it difficult still, especially in the face of grilled cheese! 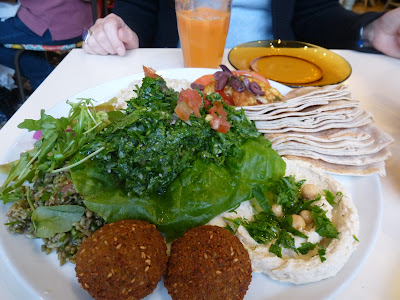 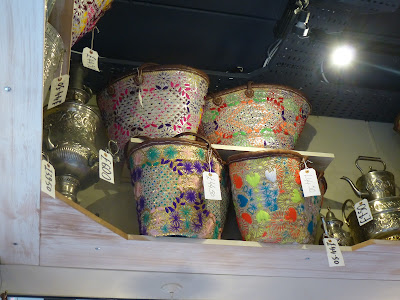 Then there was just time for a stroll around Exeter's Christmas Market before catching the train home. 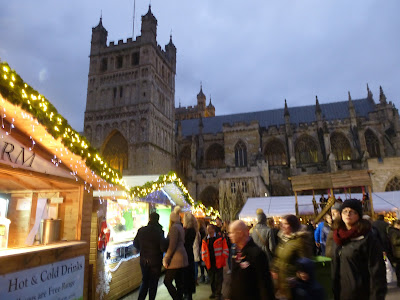 Where there may have been a bit of festive sock knitting! 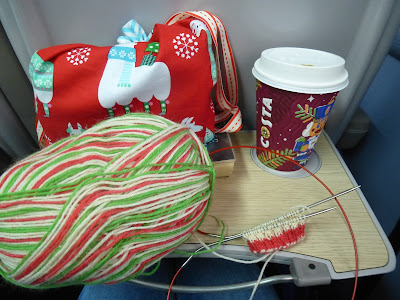 Other happies recently include:
My Opal Advent Calendar! I amuse R no end as I open this each morning with such excitement. 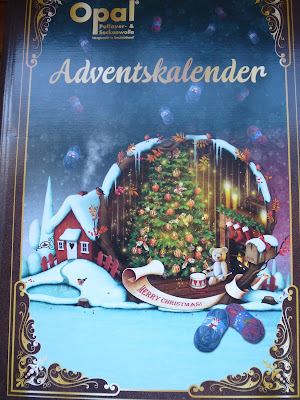 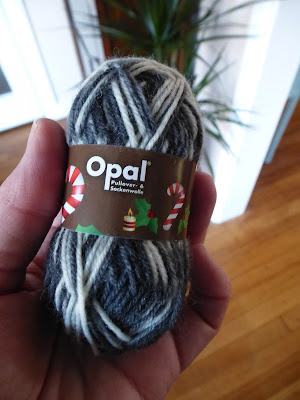 I'm currently using them to knit squares on my Cosy Memory Blanket. I say blanket but it's actually going to be a cushion for one of the dining room chairs. It only takes about a third of the ball to knit a square though, so I may start a blanket once the cushion is finished. 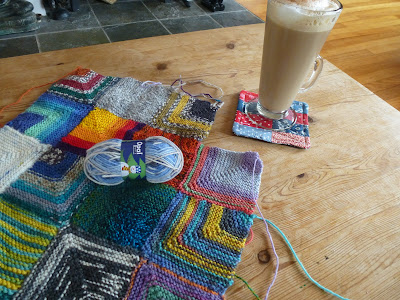 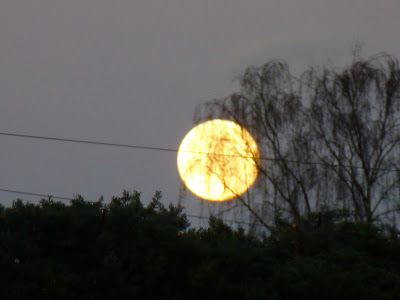 My finished Exploration Station Shawl - the pattern book and the blue yarn were bought in Amsterdam earlier in the year. Lots of the techniques were new to me, so I put in a lifeline after each section and was very glad that I had - the Brioche section was ripped back twice and the chevron border once! It is super warm and cosy though, if a little on the bright side. As Mr. West himself says: 'More is more, and less is a bore'! 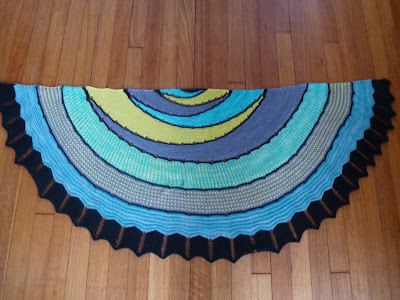 Sunday, saw us braving the elements to drive to Bristol where E was playing in a Christmas concert. The motorway was very slippery and partially blocked, so people were taking it slowly. All, apart from the lorry drivers who were tearing along as usual, far too close to the cars in front. Is it only me who thinks that it would be a good plan if lorries were redesigned so that the cabs were low down at car level? They race along, safe in the knowledge that if there is an accident, they are sitting high up out of harm's way. It's others who usually pay the price for their carelessness. At one point, we were stationary for ages and thought that we would have to abandon our plans, crawl to the next junction and go home. Eventually, we started to move and the cause of the delay? A lorry had skidded on the ice and blocked the motorway. Grr! Sorry, rant over! 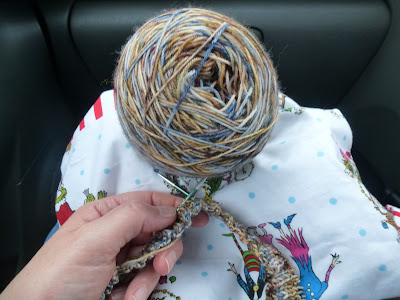 The view from our stationary car: 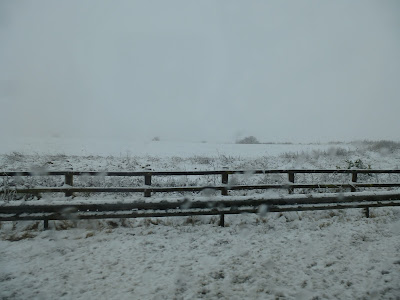 The concert was good, but could have been better. It took place in Clifton Cathedral and, on the snowiest day of the year so far, the heating was broken! Luckily, E had warned me, so I borrowed her hot water bottle and tucked it into my coat. The cathedral provided a few blankets and the audience hunkered down for the duration. At the interval, there was a stampede to the car park and people returned wearing more layers and carrying rugs. The choir donned coats and some of the orchestra were sporting rather fetching fingerless gloves. How they played and sang for 2 hours in that temperature was beyond me. Afterwards, we drove E back to her flat to defrost - her fingers were blue!

Finally, my finished train knitting. Festive socks in West Yorkshire Spinners' 'Candy Cane' colourway. These are for L, and there is just enough yarn left for a pair for E if I add contrasting toes as well. 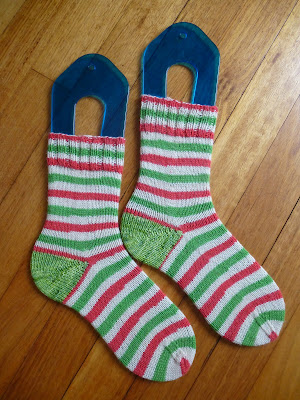 Anyway, that's all for this week. We are still treeless round these parts, but E is coming home at the weekend, so we plan to get one then. With only a week and a bit before the big day, I think it's probably time the sprouts were put on a low simmer, don't you?!

Toodle pip for now. xx
Posted by VeggieMummy at 09:00 9 comments: