At the risk of being terribly British and talking about the weather ....... what a scorcher of a Bank Holiday weekend we had! All was going fantastically well, until we woke up one morning and no water came out of the taps! It turned out that there had been a problem at a water treatment works and the water had to be cut off whilst it was dealt with. As it was an emergency, we had no warning and so no opportunity to fill kettles etc. Luckily, huge tankers began touring the area to supply us with the necessary, but given that it was a really hot day, they ran out rather quickly. I don't normally have much to do with bottled water, but a trip to the supermarket was called for and, naturally, by the time we arrived home with 8 huge bottles the supply was back on, so they're now cluttering up my larder!

Anyway, I suddenly realised that my camera was getting rather full, so here is a quick run through what we've been up to for the last few weeks. In no particular order ...........

More decorating. This time E's bedroom. She used to have a cabin bed that she had been complaining about for a while (too near to the ceiling so she couldn't sit up now that she's bigger, and too creaky!). So we took it down, I painted her room and shampooed the carpet, and tomorrow her new bed is being delivered. As she's at uni, she doesn't know about any of this so, hopefully, it will come as a nice surprise at the end of term. 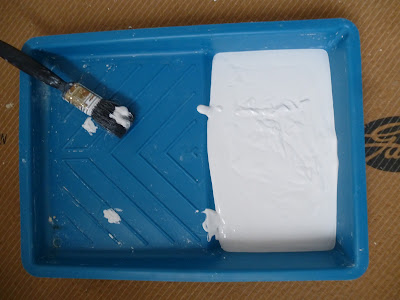 Ducklings in the garden: 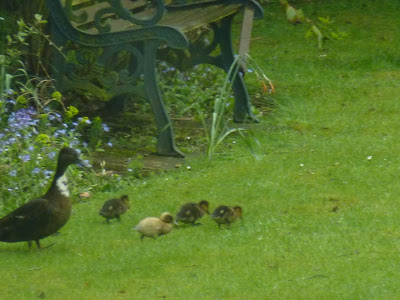 A drive through Burnham Beeches for lunch with a friend...... ...... and then a walk through the woods to find Bluebells: 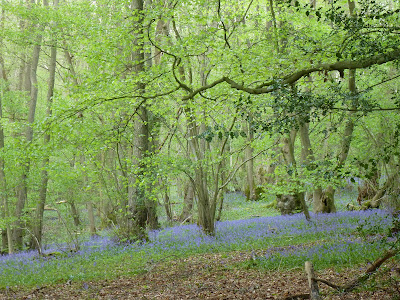 Sock knitting with my yarn bought in Antwerp: 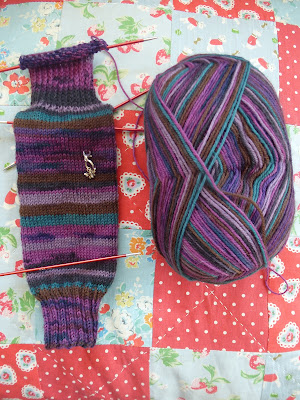 A purse making workshop at a nearby farm. It's now my 'parking meter purse' - all £ coins go in here for when I'm visiting E in Bristol. 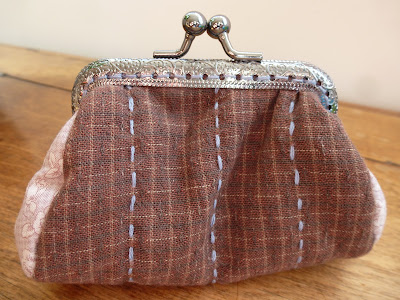 L came home for the weekend and we went for a walk and a picnic up Beacon Hill. Here's the view of Highclere Castle (aka Downton Abbey) from the top: 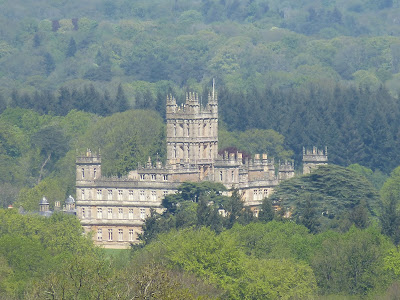 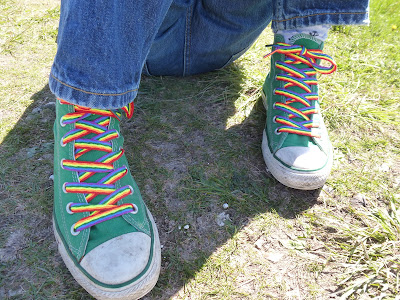 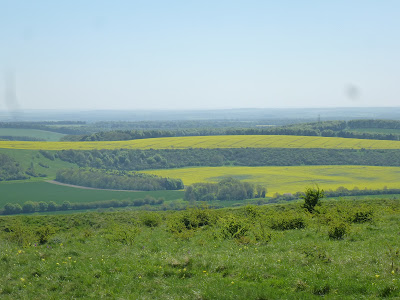 There were cowslips galore: 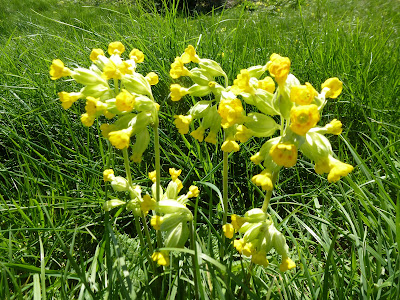 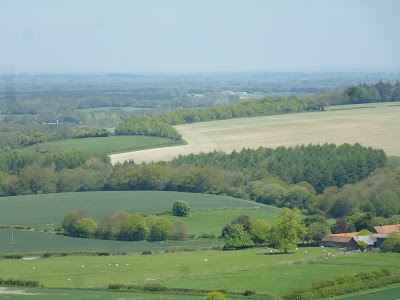 On the way home, we drove by Sandham Memorial Chapel and decided to pay a visit. This is Stanley Spencer's 'Holy Box', containing his famous war paintings. He worked as a medical orderly in Bristol and Salonika and his paintings show the everyday routines of the soldiers. No photography was allowed inside the chapel, but it is well worth a visit. Whilst we were there a man was reading war poetry aloud. Both my girls studied WWI poetry for AS English Literature, so many were familiar to us. Even so, Rupert Brookes' 'The Soldier' had me sitting there trying hard not to cry. 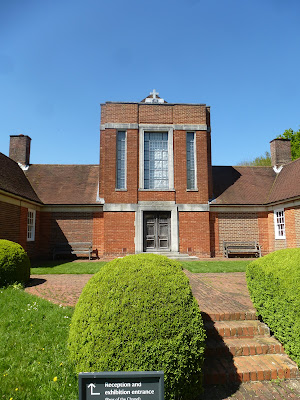 A trip to our local theatre in the evening: 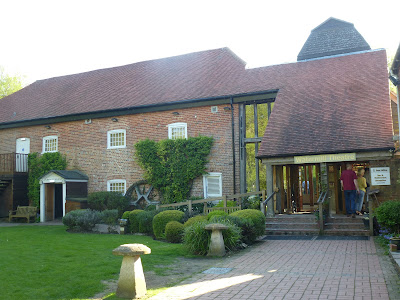 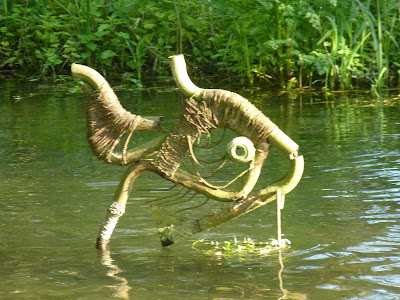 To see this. There were only 3 cast members playing all the parts, and they were brilliant. 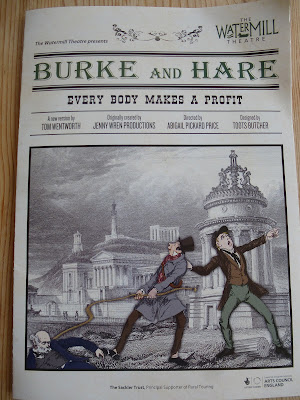 L has a kayak that she bought when living by the river in Oxford. Now that she lives in London, 'Nitwit', as it is affectionately known, lives in our shed. She had an outing on the Bank Holiday - L and R did most of the paddling, but I did have a little go. Well, there are only 2 paddles and my role was chief picnic bringer! 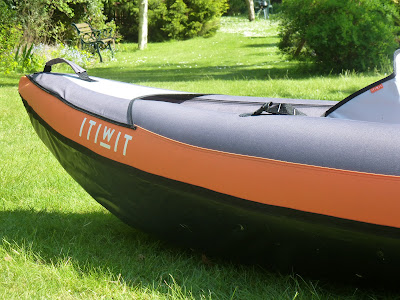 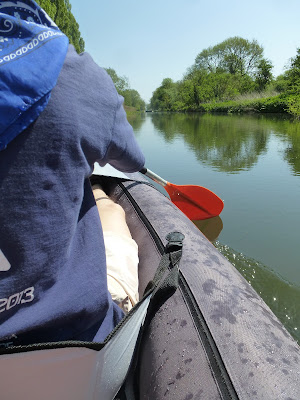 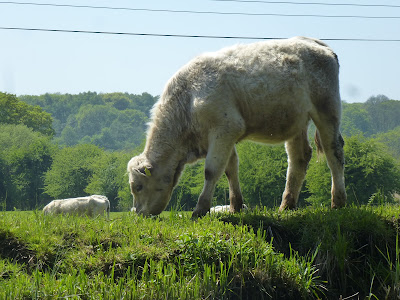 Floral goodness from the garden. These were my Tulips from Amsterdam. We bought a mixed bag of bulbs and initially I thought that they were all red..... 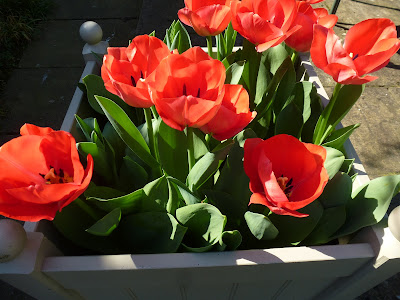 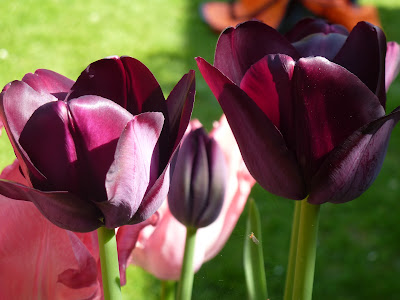 The Wisteria is flowering. It smells beautiful, and as I type the scent is wafting through the open window. 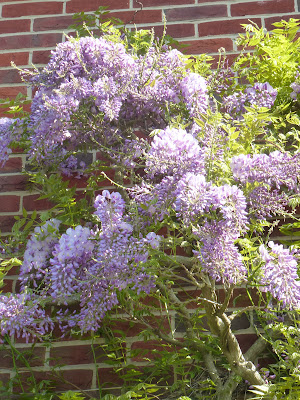 A few years ago we bought a Magnolia tree for the garden. Sadly, every time it made some attempt at growing/flowering the deer ate it! Over the winter, R added a barricade of netting and look! 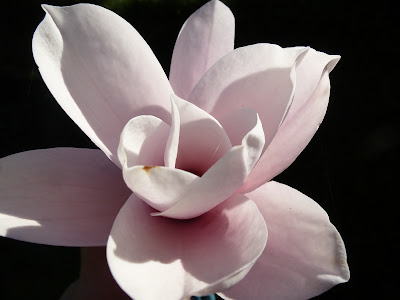 There is just the one flower mind you, but it's a start and I'm thrilled!

Hostas before the slugs! 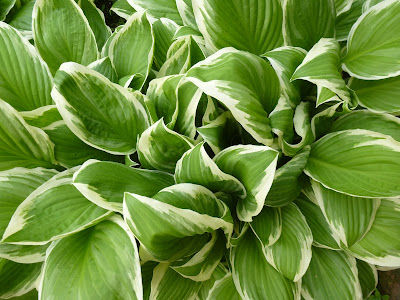 ...... and it's blossom time! Blossom against a blue sky is one of my favourite sights. That and yellow Rape against a stormy sky, but sadly I don't have a picture of that! 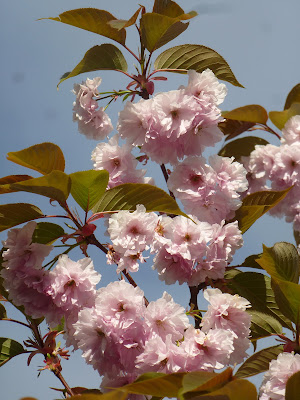 Finally, my finished 'Dotted Rays Shawl' by Stephen West. I really loved this pattern; there was just enough detail to keep me interested, but also lots of garter stitch making it ideal TV knitting: 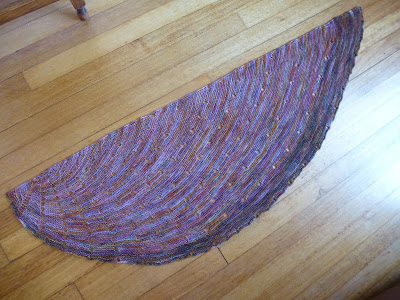 Well, that's my camera clear. I think that it's cooled down a bit now, so I'm off to do a bit of weeding. Enjoy the sunny weather while it lasts. I tapped the barometer today and it swung towards rain, so I have my fingers crossed for a good old thunderstorm this evening. Another of my favourite things! Enjoy the rest of your week.
Toodle pip for now. xx