The Kestrel (?) and the Kingfisher

I don't claim to have the cleanest of windows; not by a long chalk. We do, however, have many trees which throw their reflections on my grimy panes and confuse the local bird population no end. Usually, it's just pigeons that hit with a loud thump and fly off again, leaving me with a pounding heart and yet another birdie print on the glass. Some of the prints are quite beautiful but the eyeball imprints turn my stomach somewhat! A couple of weeks ago, we experienced another thump. This time, on going to investigate, I discovered a rather dazed looking kestrel on the patio. At least, I think it's a kestrel. I'm more used to recognising them hovering in the air, not sitting looking bedraggled on my flagstones. Can any ornithology enthusiasts out there identify it? It was quite small, hence why I thought it was a kestrel, but it may have been a young something else.

It sat there for ages, with R and I peering worriedly through the glass. Our neighbours have a couple of cats that we're always having to chase away from the bird feeders. Whilst this bird looked maybe a little too big/aggressive for the local moggies to have a go at, you never know and it was extremely visible and vulnerable sitting there in the rain.
After a while, I rang the local bird of prey rescue centre. The chap answered and said that he was currently in the New Forest, but would be back in the evening. Apparently, kestrels (if that's what it was) will sit there for hours when stunned. If we were worried, we could throw a towel over it, put it in a box and he would call in on his way home and collect it. Otherwise, we were to keep a distant eye on it and, hopefully, it would fly off when it had recovered sufficiently.
So, that's what we did. I went about my business nonchalantly, like Winnie the Pooh not looking at the bees. Thankfully, after a couple of hours, off it flew.
A few days later, there was another thump on the glass. Glancing up, I saw a pigeon flying away and thought that that was the cause. On getting up, however, I saw a very sad sight indeed. There was a kingfisher lying on the patio. We have the River Lambourn at the bottom of the garden and, if you are very quiet and lucky, you will occasionally see a kingfisher darting along the water. They are the most beautiful sight and I was heartbroken that our patio doors had been the cause of its death. It's neck was broken; possibly because of the length of its beak. At least it would have been quick. I couldn't bear to just throw it in the bin, so we buried it by the edge of the river.
R commented that many taxidermists would have loved to get their hands on it. He looked it up and, apparently, flying into glass is how they get most of their specimens. For £250, we could have had it stuffed, but I don't really know how I feel about stuffed animals. I've admired stuffed dodos etc in museums along with the next person, but there is always something tragic about them, with their sad, glassy eyes. So, I'm glad we let it rest in peace. We have since seen another kingfisher whilst having the last BBQ of the year, so at least we weren't responsible for the death of the only one in the area. I just hope it wasn't its mate!
Other events this month:
An antique and brocante fair at Shaw House. It was nice to potter round, but very expensive and a lot of it was modern: 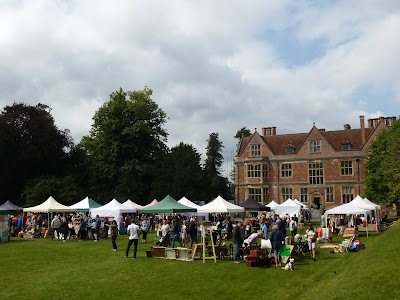 The Southern Wool Show at the racecourse. This was my first yarn show since the whole Covid fiasco and it was lovely to smell those yarn fumes again. I went with 2 things in mind - a skein of sock wool and a sweater's quantity of yarn for Joji Locatelli's 'The Easy One'. I found both! 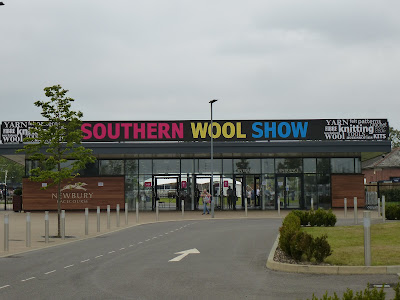 The sock yarn is the 2021 Christmas yarn from West Yorkshire Spinners. I'm not a huge fan of stellina yarn, but it's become a bit of a tradition that my Christmas Eve cast on is with WYS. I was torn between the green sweater yarn and a burnt autumnal orange/brown. The stall owner actually took my photo holding both up to my face to help me decide. Between us, we thought that the green suited me better, so that's the one I bought. I haven't cast it on yet. 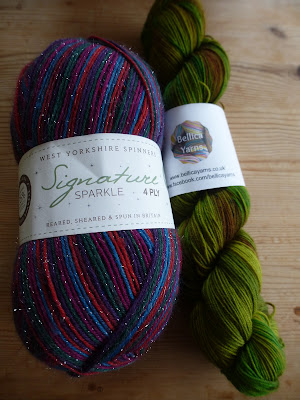 Other yarny endeavours this month include a pair of spiral wrist warmers. I initially intended them to be socks. The pattern has no heel and, after knitting so far, I tried it on and decided that I wasn't keen. Luckily, the wrist warmer pattern was the same number of stitches, just shorter, so that's what they became instead. 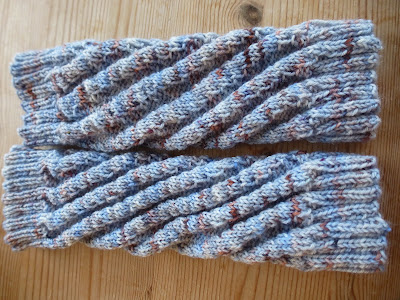 There was enough yarn left over to make a proper heel flap and gusset pair of socks, providing that I do a contrasting toe and cuff: 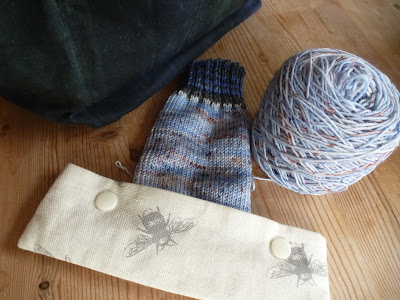 This photo is for the lovely CJ. She kindly sent me some pilea peperomioides babies in the spring and they are now much bigger and producing babies of their own. I'll leave them in situ until next spring and then try separating them: 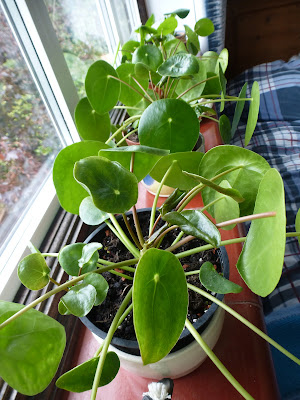 Various walks have taken place. The one below was a circular walk starting in St. Mary Bourne. We went there specifically to pick blackberries as the ones we picked last year were fantastic - huge and with an amazing floral flavour. Sadly, conditions this year were obviously not as ideal. They still had the same flavour, but were much smaller and quite hard. In addition, I managed to get my walking boot caught in a bramble and ended up flat on my back in a patch of nettles. Adding insult to injury, as I fell my arm shot up and my collected blackberries flew far and wide! I'm not sure that the resultant pie was worth the bother: 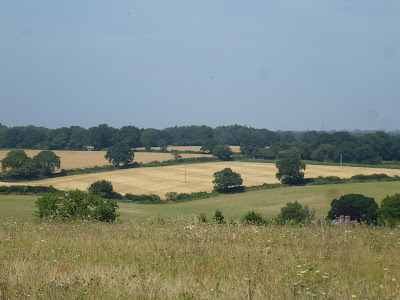 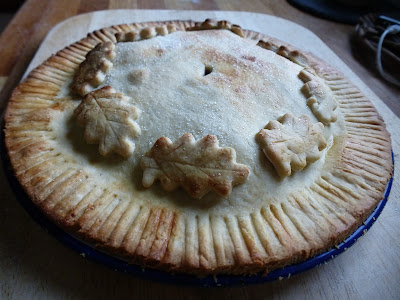 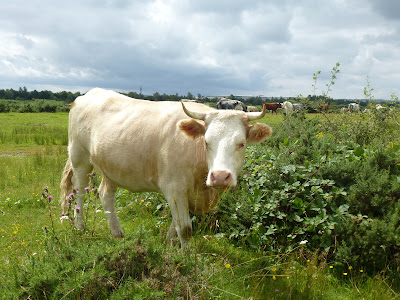 Circular walk at Pewsey. Unfortunately, it poured down when we were about halfway round and we were soaked. We had a slightly damp picnic under a tree and waited for it to ease off: 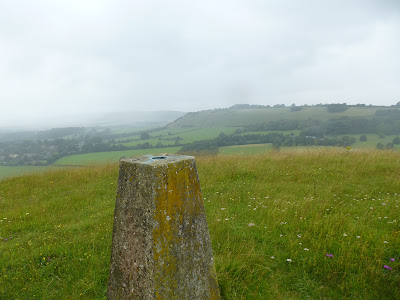 A heron, spotted whilst walking back along the towpath. We also popped into an amazing charity shop. You know, one of the actually cheap ones! I bought a lovely terracotta plant pot and a copy of 'The Complete Father Brown Stories' for 50p each. :O) 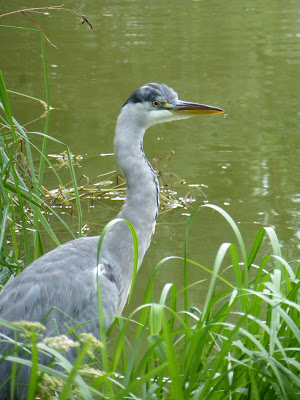 An elephant hawk moth caterpillar. Looking at our local neighbourhood website, these are very common at the moment: 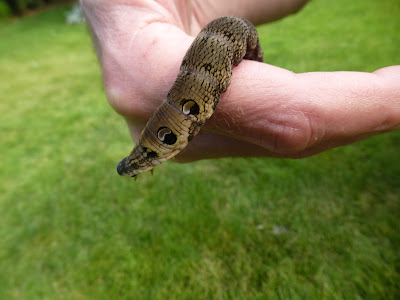 A couple of marrows found hiding in the veggie patch. One is now soup and I have my eye on the other for a curry: 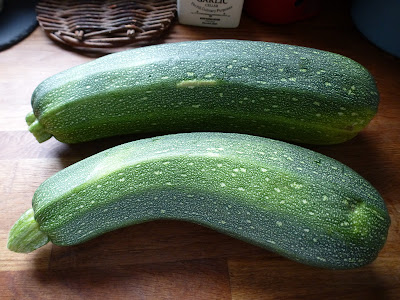 A trip to the Watermill Theatre to see a play about Amy Johnson: 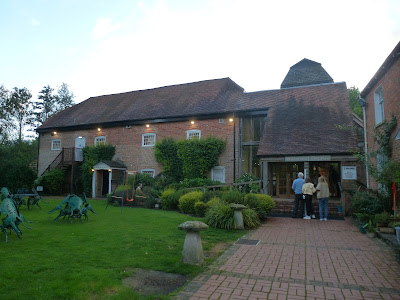 It was brilliant and the actress kept up a beautiful Hull accent throughout. Having listened to a recording of Johnson speaking, however, despite being born there she sounded nothing like that! 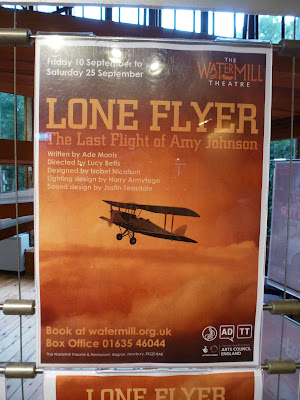 Another trip to the theatre. This time to see 'The Comedy of Errors' at Stratford. It was an outdoor performance (Covid again!) but, luckily, the rain kept off and a fine time was had by all. 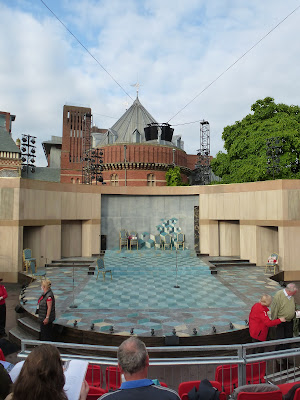 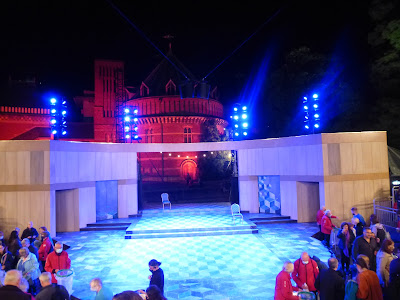 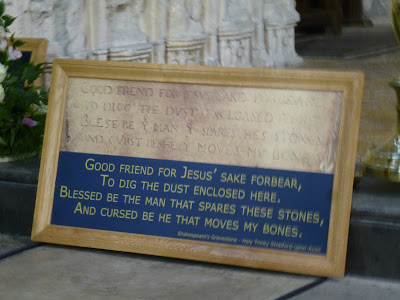 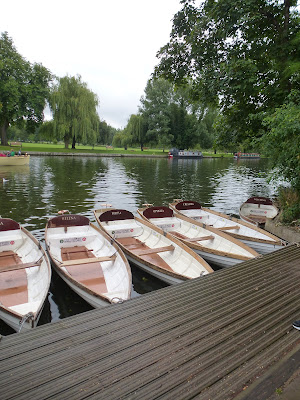 Lunch at an amazing vegan cafe. We returned later in the afternoon to sample their cakes too! :O) 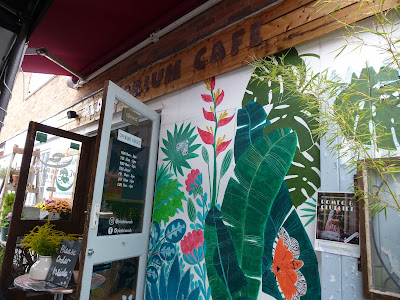 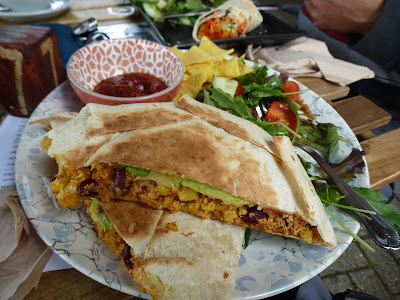 Well, that's all for this month. I'm just off for a swim and then to tackle the supermarket run. Anything exciting going on at your end?
Toodle pip for now. x
Posted by VeggieMummy at 03:53 10 comments: