There was a time when we were students, and then pre-children, when we had houseplants galore. The largest of these was a Monstera Deliciosa (aka Swiss cheese plant) which, in our then south facing dining room, grew so enormous that we had to edge round it in order to access the kitchen. Going on holiday meant a toppling arrangement of pots on capillary matting, to ensure an adequate water supply during our absence. Then came first one and then another offspring and the plants became more of a chore than a pleasure. Gradually they dwindled in number until for many years our house was a plant free zone.

I dipped a toe back in the water so to speak, when L had gone off to uni and E was spending a week doing work experience at the Mary Rose Museum in Portsmouth. I was designated taxi driver and decided that it wasn't worth the time/petrol to come home in between dropping her off and collecting her again at the end of the day. I splashed out on a week's ticket and spent the time pottering around the historic dockyards. The weather was fine and every day I had my packed lunch in the small Porter's Garden; eating my sandwiches and doing a bit of English paper piecing. The porter had a stall of plants for sale and, at the end of the week, I bought a baby spider plant for 50p as a souvenir. That was about 5 years ago. The spider plant grew and produced numerous babies. Some were kept to replace the original one as it grew leggy and past its best, and some were donated to new owners. I still have 2 of the descendants.

My 2nd 'Gateway' plant was probably the Flaming Katy that was a gift for babysitting my neighbour's grandchildren one night. Then E went off to uni and, probably as some sort of reactive empty nest effect, I developed the urge for more greenery. I was often found loitering in the houseplant section of the supermarket or Wilco's (always a cheap option) and a visit to the garden centre or Ikea could get me very excited indeed. Luckily for our bank balance, there are no local beautiful plant shops like the ones that I've spotted in London and Bristol, or I think R would have put his foot down by now. :O)

So, gradually the house has taken on a more leafy aspect. I have the urge for more, drooling over pictures of various urban jungles on Instagram. I really want a Begonia maculata or polka dot plant - my mum had one many years ago and they remind me of her - so I'm on the lookout. Who knows, with Mother's Day looming, they might have some in B&Q; I'm sure we need more sandpaper!

Here then, for those botanically inclined, are some photos of a few of my planty friends:

My Nerve plant (I always think of it as being pronounced 'Noive', like the lion in 'The Wizard of Oz'!). This one likes humidity, so is currently lurking in the bathroom. It's formed a little friendship group with 2 orchids, a bunch of air plants and a Devil's Ivy in a hanging basket.  It's a fine line between adequate water vapour for the plants and mould on the ceiling. 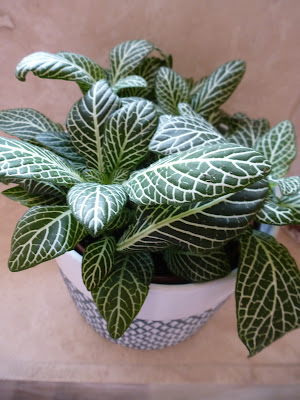 My little umbrella plant, closely guarded by Clarence the lion who came home with us from Cambodia: 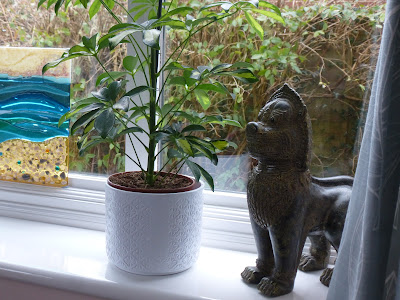 The Yukka who likes it in the hall - our much hated glass front door has the one advantage that it lets in lots of light: 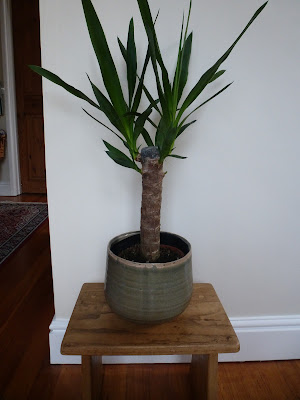 My Dracaena marginata, who is very tolerant of the central heating and doesn't mind the dining room now that it is lifted up out of the way of marauding rabbits - Hamish, I'm looking at you! 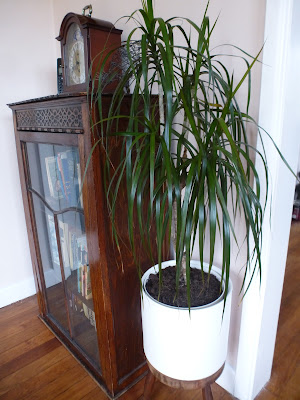 Herc, my Jade plant. The first time that I visited L at uni, I took her a small Jade plant. She named it Douglas and he kept her company throughout 3 years at Oxford - especially enjoying the 2nd year when she spent time in a room with a huge, south facing bay window. It was like having his own little greenhouse and he shot up. When 1 of his leaves was knocked off, she potted it up and gave it to me and Herc has developed from there. I bought another one for J when he moved into his 1st flat in Oxford (that one was Martin) and then one for E when she went off to Bristol -  Arthur. So that's Herc, Douglas, Martin and Arthur - 10 Brownie points to anyone who can guess the connection! 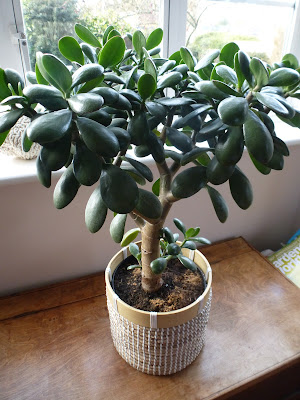 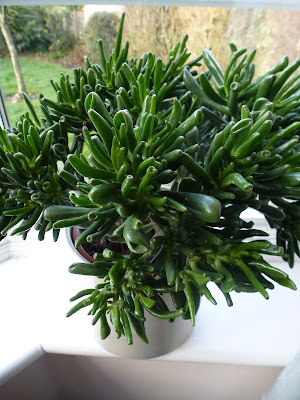 1 of my Snake plants on top of the piano. I have another one lurking on the microwave in the kitchen amid various cuttings. Both are very forgiving and don't mind the shade too much: 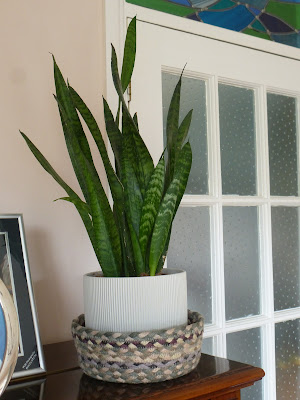 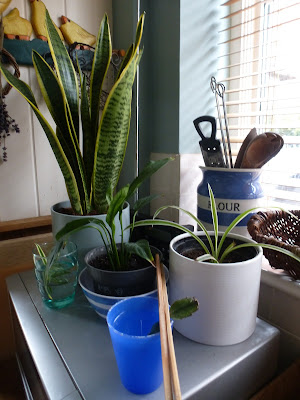 A relatively recent acquisition. I only popped into Wilco's to look at bird food and Howard came home with me. Is it just me who names house plants? Please tell me that I'm not alone in my crazy anthropomorphism! I'm hoping that it will be a while before Howard attains the size of my old cheese plant: 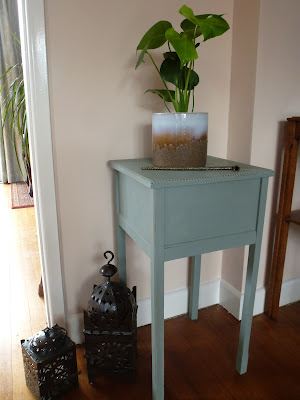 Various plants in hanging baskets - that macrame workshop has really come in handy! 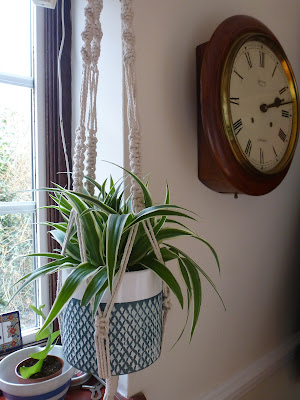 That's more or less it at the moment. There are a few pilea, tradescantia and more succulents dotted about the place, also more peace lilies than you can shake a stick at since I divided it last week. There is also Benjamina (variegated ficus benjamina). I did take her photo but somehow managed to delete it. Benjamina is a weeping fig with a tendency to the dramatic. Incorrect watering, light conditions or, heaven forbid, a draught and her leaves drop off. She is currently in E's room as the conditions there seem to suit her.
Do any of you have a favourite houseplant? I'm open to all recommendations! :O)
Plants aside, Lockdown #3 is proceeding in much the same way as numbers 1 and 2. Lots of walks, crafting, reading and the odd bit of gardening when possible. The kitchen needs decorating but I have to wait for the weather to warm up sufficiently for Hamish to be able to go outside for long periods. He can be dreadfully underfoot and a moulting rabbit and wet paintwork aren't a happy combination!
Here are a few more photos from my camera this month:
Enjoying my Camellia: 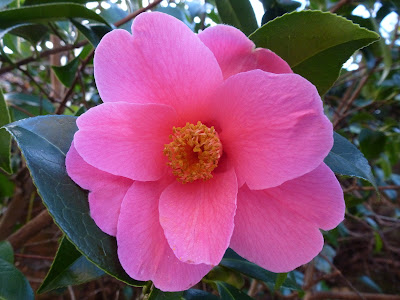 Flowers from T. She went round the market at the end of the day and bought up all the flowers to give to neighbours to cheer us all up. :0) 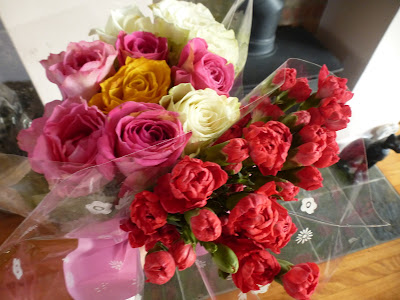 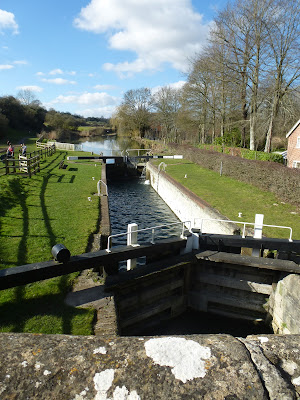 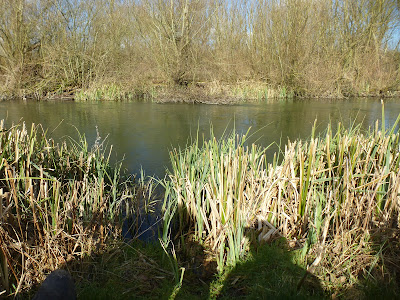 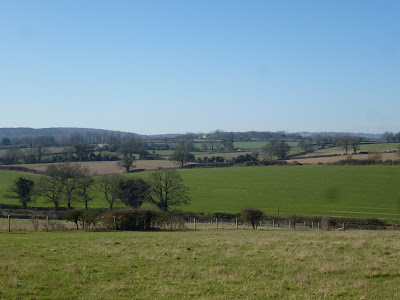 More sock knitting. The yarn was from the American Museum in Bath last year: 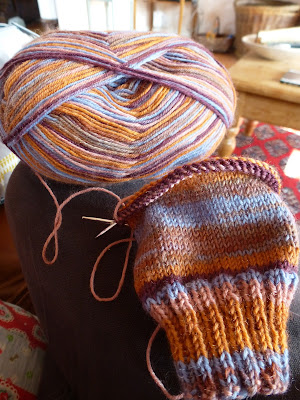 Playing with clay. I'm not a huge fan of hand building and really miss going on the wheel but needs must. This is destined to be a hanging basket for more plants! 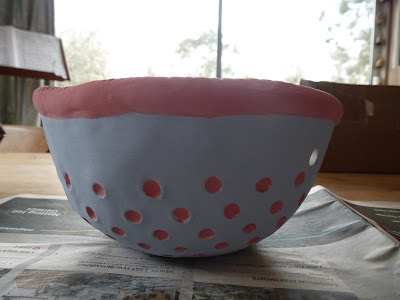 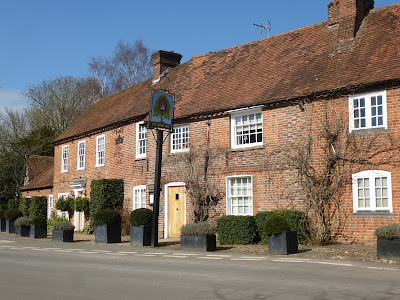 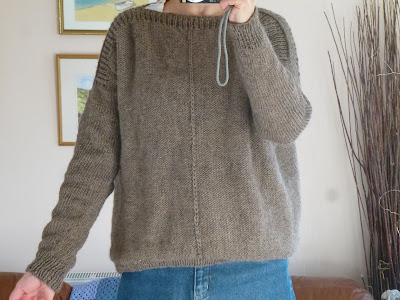 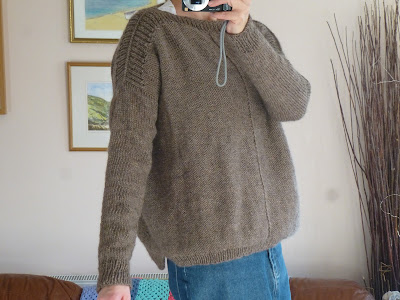 'Snickerdates' - dates stuffed with peanut butter and covered in chocolate: 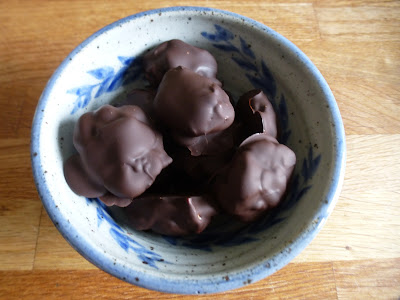 Lots of snowdrops, although I've missed going to Welford Park to see them this year: 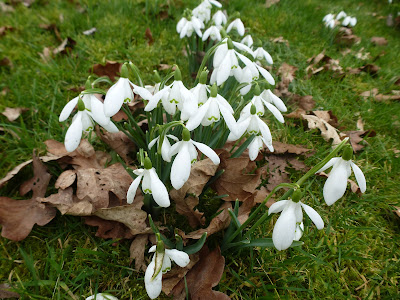 Highland coo on the Chaddleworth and Brightwalton walk: 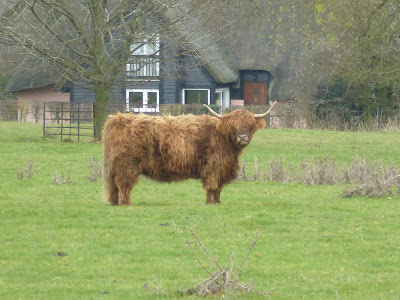 Frozen water on the weir at Marsh Benham: 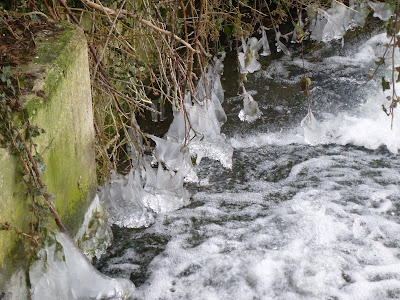 The canal was frozen too although it's difficult to see in the photo: 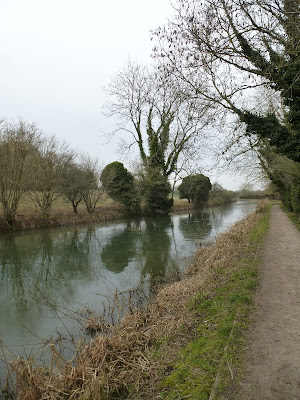 Well, that's all for now. R and I have our first Coronavirus vaccination booked for the end of the month. If nothing else, it will be a day out. Our nearest vaccination centre is in Basingstoke, so a fair drive. I wonder if they will have any good plant shops?!
Toodle pip for now. x
Posted by VeggieMummy at 14:20 10 comments: