Power cuts were quite the rage in the 70s. Proposed pay caps resulted in the miners working to rule and coal reserves ran low. The Government was forced to reduce electricity consumption; hence the cuts. I have vague memories of being pleased at the time, it being impossible to do homework or piano practice in the dark!

Usually the only power outages we've had recently have been when the oven throws a wobbly and the fuse blows. Until this week that is. At 5:15 on Tuesday the electricity board had some sort of problem local to us and we were forced to spend an evening without power. It's amazing how reliant we are on the old electrons continuing to flow. Luckily, we have a gas hob so I was able to cook dinner but, without television, radio and it being too dark to read, we were in danger of having to make conversation! R's mobile was charged, so we rang the help line to find out what was happening. They informed us that the fault was temporary and would be rectified by 8:30pm. Dinner was consumed and we went for another walk - not only to pass the time, but to have a nosy into people's houses to see how big an area had been affected. 8:30 came and went and the automated message was now saying 2:30am. That would be 9 hours and I began to wonder how long the freezer would take to start defrosting.

Candles were lit and the board games unearthed. Backgammon and Rummikub kept us entertained until we gave up and had an early night. Power was restored by just gone midnight - I know this because a neighbour's alarm went off!

Talking of Backgammon, R had a backgammon related injury yesterday (Yes, we've got the taste for it now!). On winning, he jumped up, pulled his sweatshirt over his head and started to do a victory lap like a footballer. A combination of numb feet from sitting on the floor and the absence of light resulted in him falling over, head first into the sofa. Luckily, only his pride was hurt, otherwise it might have resulted in a rather embarrassing trip to A&E!

I've uploaded all the photos from my camera for this month. There aren't that many, few are interesting and none of them show the torrential rain of the past few days. The weather is certainly making up for the dry April. I've been trying to do some gardening but I'm in and out like a fiddler's elbow. We tried to make a quick dash round the block for some exercise yesterday .... the coats and shoes are still drying.

For what it's worth, here they are:

Rhubarb and Ginger jam. Actually, I'm calling it compote as it tastes nice but is barely set. 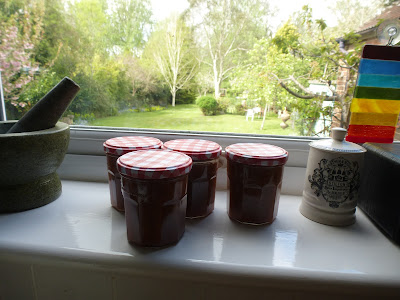 My Mistletoe Cactus. I made the pot by hand during the last lockdown so, like Owl's spelling, it wobbles a bit. The cutting I got for about £3 on Ebay. A visit to B&Q last week revealed fully grown, bushy varieties for a fiver. I was a little miffed but am consoling myself with the fact that I was supporting a small business rather than a big chain! 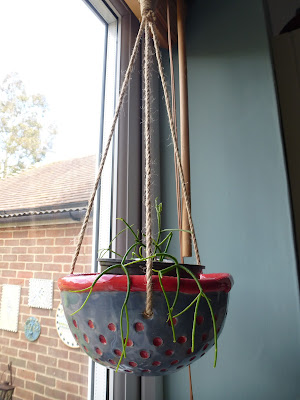 Trying to catch the cherry blossom before the forecast wind and rain: 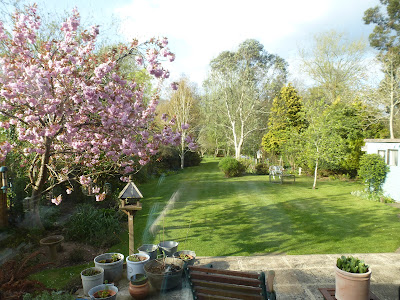 Ridgeway walk. We took a picnic but halfway through the heavens opened and we had to dash back and finish it in the car: 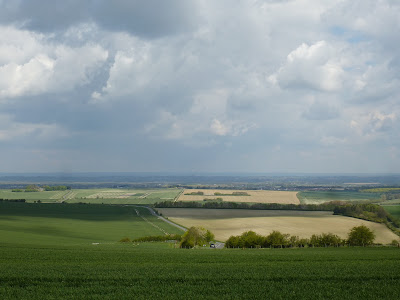 Winding up some yarn for my scrappy Boxy Sweater: 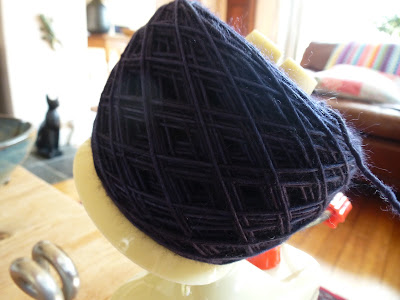 The blue was bought especially but the colourful stripes are leftovers from various projects, mostly sock related: 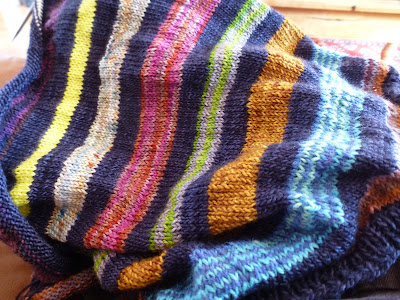 Street furniture, found on a walk to the postbox. L is the Queen of street finds. I think it's a result of living in London where a lot of people don't have cars to transport stuff to the recycling centre. It's usually left outside with a note saying 'Free, please take'. I was pleased with my find and spent a happy afternoon cleaning off the bird poop and sanding it down. I debated painting it but, as I had the wax, it got a coat of that and a new knob instead. 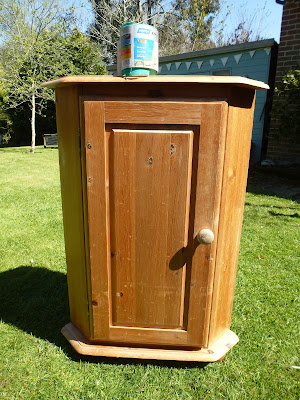 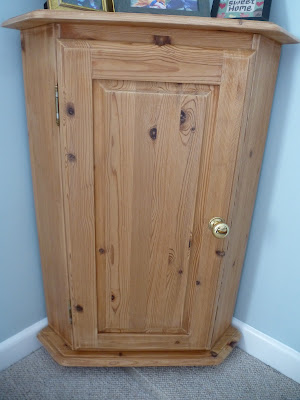 Blossom against a blue sky ..... before it all blew off! 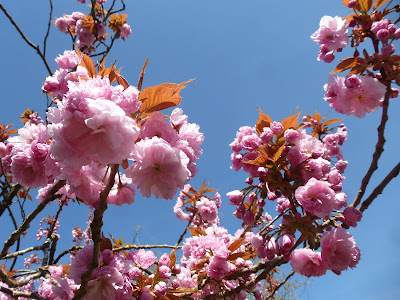 Walk in the bluebell wood: 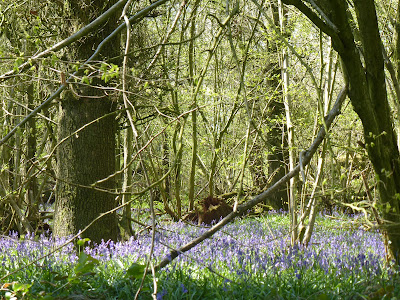 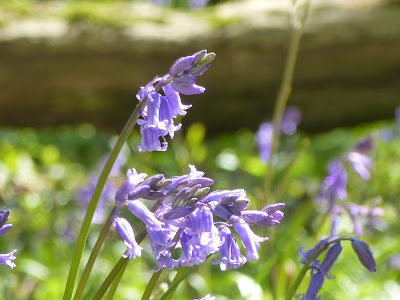 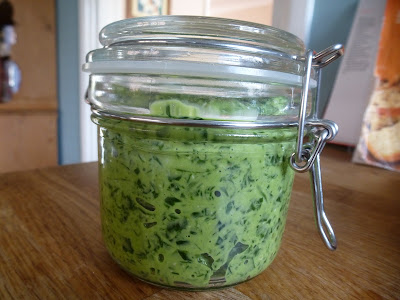 Picnic spot on the same day: 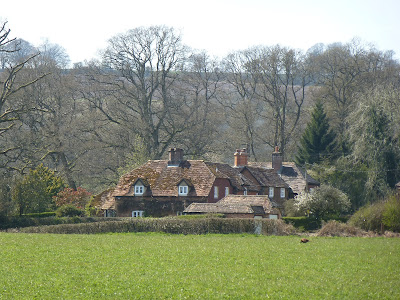 My magnolia tree excelling itself. The most it has had before is 4 blossoms! 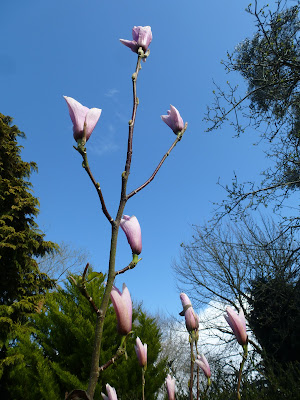 Another walk. To be honest, there have been so many that I can't actually remember where this was! 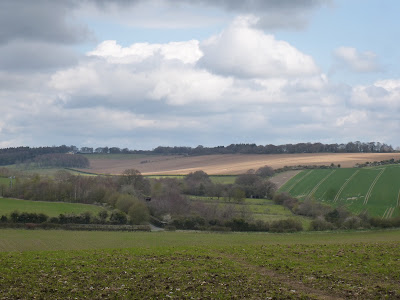 Finally, Hamish snoozing in the sun. He will be 10 this year and is starting to look his age. His right eye is very cloudy with a cataract and his left is starting to go too. I think they remove them for dogs but I don't think it's encouraged for rabbits as they don't take to the anaesthetic as well. He seems happy enough though, and he's still one of life's gentle souls. 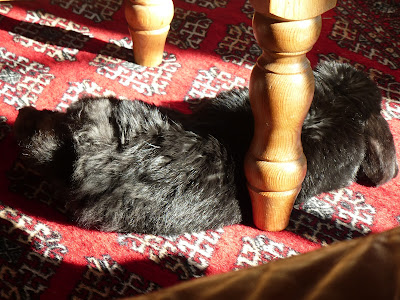 Well, that's all for this month. Restrictions are further eased in England today, so we're looking forward to going to a restaurant this week. We won't even have to sit outside in the rain!
Toodle pip for now. x
Posted by VeggieMummy at 03:35 8 comments: