The Silence of the Birds

The weekend before last saw us taking a trip to Winterbourne Downs, a nature reserve near Salisbury. It was R's idea - he looked up places of interest online and I went along with it and made a picnic. 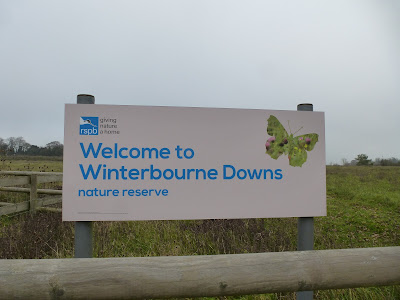 I'm not sure what I had in mind really; probably something along the lines of Slimbridge Wetlands Centre, with lakes, numerous hides and birds aplenty. Not so! The 1 'hide' that we discovered was a wall near the entrance that resembled one of those saloon door style affairs, revealing faces and legs below the knee. I'm not sure that the birds were fooled! A family was there when we arrived and we patiently waited, maintaining our social distance, until they had finished. There was talk of green woodpeckers and we tried to look enthusiastic, despite having watched one in our garden that morning over breakfast. To be fair, anything would have been exciting. I'm not sure if it was the time of year but the birds were conspicuous by their absence.

There was a field that had been planted with various bird friendly plants - linnet and the like - but again, winter didn't show it at its best. We plodded around the marked route. The views were pretty but there were midges galore. Eventually we sat on a handy bench and got out the picnic. R pointed out a crow in the distance! It was only when we sat down that we realised what was wrong. Apart from the distant noise of some traffic, there was silence; no birdsong whatsoever. Neither of us could remember the last time that had happened and it lent a strange sci-fi atmosphere to the picnic.

After lunch we walked around the perimeter of the reserve. Suddenly, we heard them - birds! Sadly, not within the reserve but in the trees in the distant field. The highlight came when we were returning to the car, when we spotted not only - wait for it - a robin but also a  spotted woodpecker.   Again, common garden birds but we took what we could get! Maybe we will return in the summer when I'm sure it will be much better. 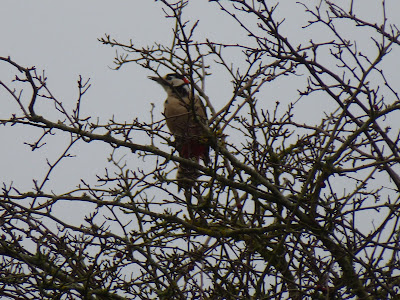 Other trips out and about this month include:

A return to Chawton in Hampshire (home of Jane Austen) to redo the circular walk we did earlier in the year. I love the cottages overlooking the church in the nearby village of Farringdon: 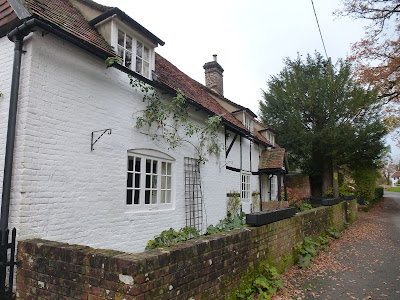 Massey's Folly in Farringdon. Thomas Massey was the rector in the village for 62 years. He spent 30 years building the folly, just him and a single bricklayer. The purpose was unknown, but it has since been used as a school and village hall: 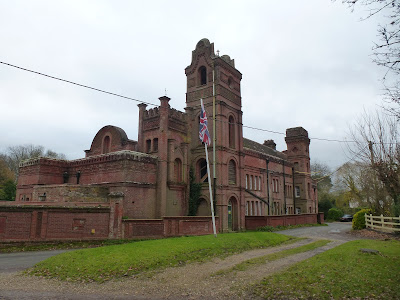 Fyfield Down Nature Reserve with burial mounds and sarsen stones: 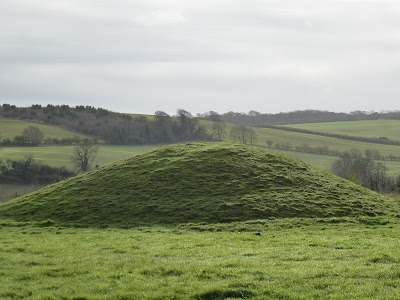 View from our picnic spot: 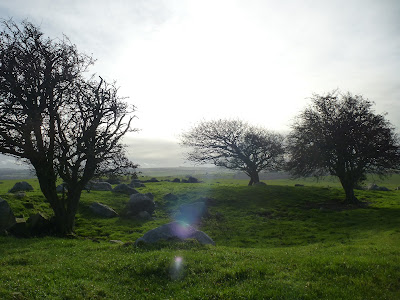 Ludgershall Castle. Constructed in the late 11th century, it was later turned into a luxury residence by King Henry III: 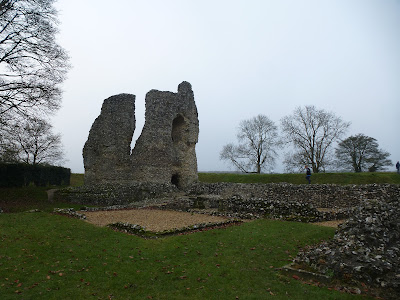 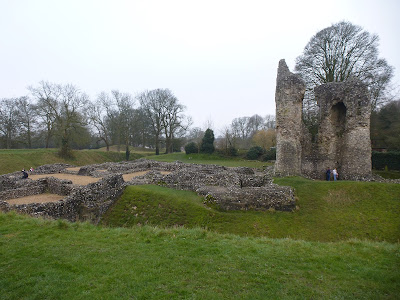 A Christmas wreath. I usually make one but thought I'd support our local market this year: 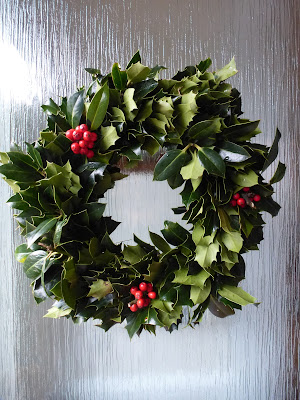 Lighting the Advent candle. Bought from Winchester Cathedral earlier in the year: 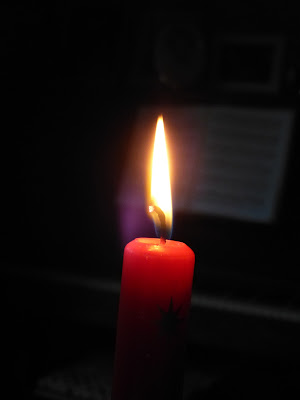 Enjoying the Winter sunrise - photo obtained by hanging out of the bedroom window! 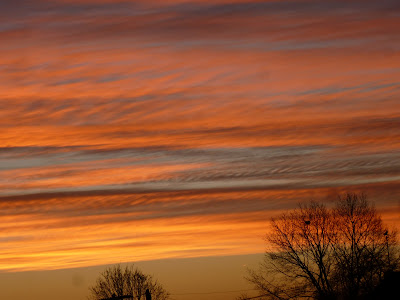 And last, but definitely not least, my Yarny Advent Calendar that I swapped with Barbara from Coastal Ripples . This has brought me such joy after, what has been for all of us, a truly ghastly year. I really look forward to opening my daily festive packet. At some point during the day I can be found, cup of tea at my side, using the yarn to add a square to my cosy memory blanket. It is definitely one of my daily 'trio of blessings'. 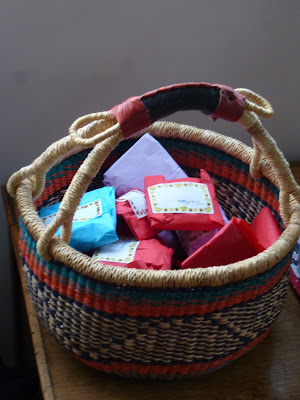 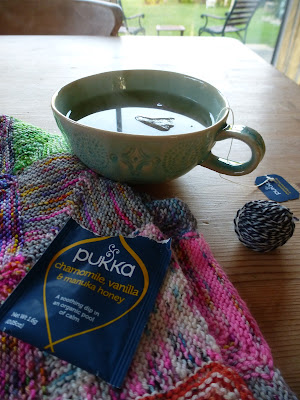 As well as delicious tea, Barbara has also included some seaglass - I do love a bit of seaglass...... 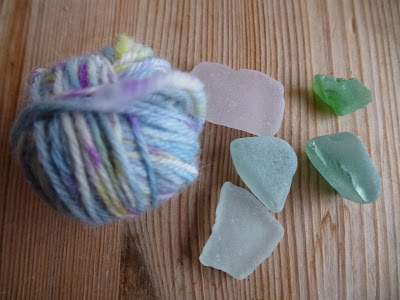 ..... and some periwinkle shells. Such gorgeous touches from her beautiful island of Jersey. I have added them to my bowl of treasures where I keep fossils, crystals, special stones etc. 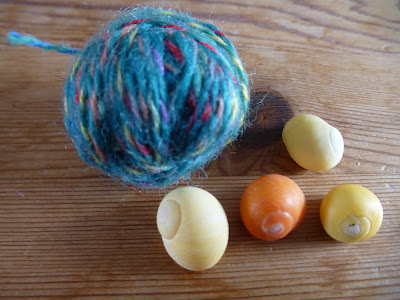 Here is my cosy memory blanket. The top row and the 3 squares on the left of the row below are from Barbara. I love them to bits! 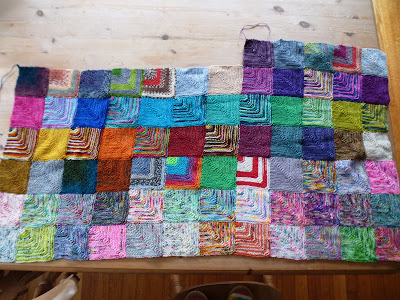 With the bits of yarn leftover, I am making up a magic ball so I can add them to my crochet scrappy blanket in the New Year. I don't want any to go to waste. 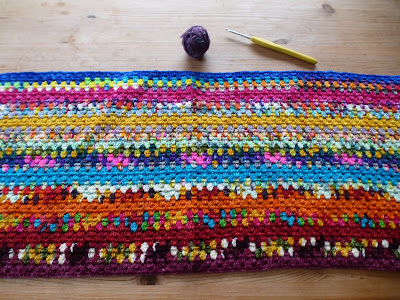 Well, that's all for this week. Probably this month too, as I'm not sure that I will get around to posting again this year. We're off to get a Christmas tree this weekend and then - great excitement- we have a theatre trip to see 'A Christmas Carol' at The Watermill; I can't wait!
Wishing you and yours a happy holiday season and here's to a brighter 2021!
Merry Christmas. xx
Posted by VeggieMummy at 02:49