Hello there. I'm sitting here feeling rather smug at the moment. The reason being that we went away for a short break last weekend and the weather was absolutely glorious. Not so at the moment - I've just had to charge outside to rescue my washing as it's currently pouring down. Autumn seems to have well and truly arrived.
We had, on a whim, booked 3 days and 2 nights in a hotel in Hereford. Neither of us had been before and it looked like a good base to explore the area. 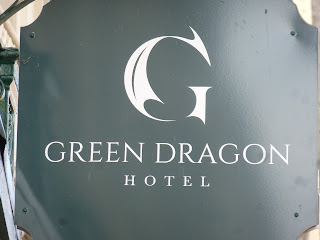 We stayed at the Green Dragon Hotel next to the cathedral. The hotel was fine, apart from the overly heated room and the noise from the kitchen vent which kept us awake when we opened the window to try and cool down. The noise stopped at around midnight, only to start again at 5:30 the following morning. To be fair, it wasn't the noise that woke me up but R bellowing 'There's that noise again' down my ear! They did a fine vegan breakfast though, so I shouldn't complain.
We stopped off in Tewkesbury on the way. We had stayed here before, renting a small Tudor cottage back when we were students. I remember that after getting over the initial shock of there being no TV, we raided the charity shops for 2nd hand books and board games, collected wood for the open fire and had a fabulous time. It was just as beautiful as I recalled.
Bridget parked in front of Tewkesbury Abbey. We had our picnic lunch in the grounds: 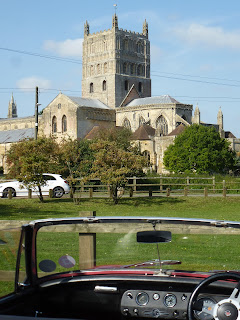 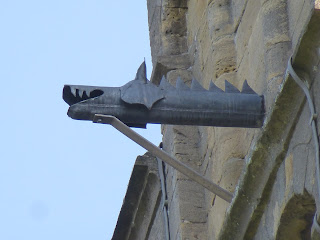 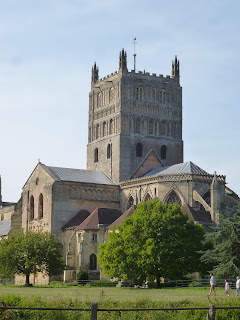 We then continued to Hereford itself. The statue of Edward Elgar stands overlooking Hereford Cathedral. Designed by Jemma Pearson, it depicts Elgar supposedly finding inspiration in the Herefordshire countryside, which he loved to explore on his Sunbeam bike. He lived in Hereford for a while with his wife and daughter, composing many pieces there before moving to Hampstead in London. 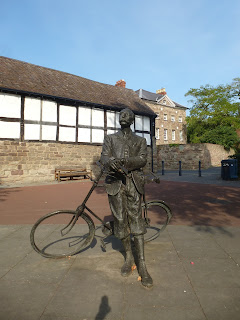 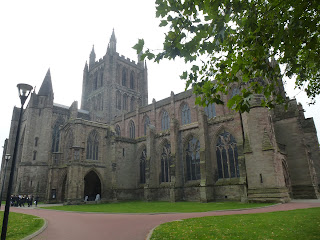 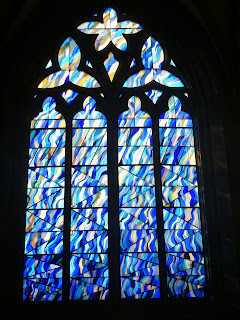 I loved the ceiling bosses and decoration: 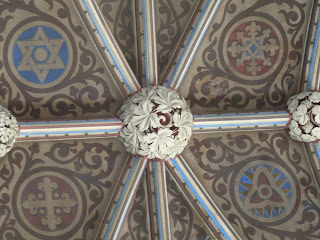 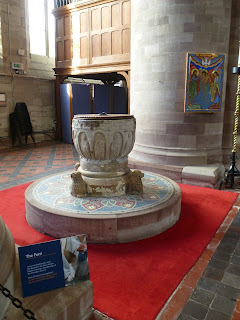 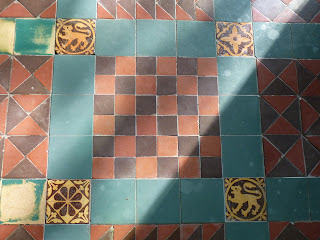 The chained library containing many rare and valuable manuscripts. The books are shelved with the page edges facing outwards, rather than the spines, so that the chains don't tangle when thay are lifted onto the desk. One end of the chain is attached to the book's front cover and the other edge to an iron bar. Lists at the end of the row enable readers to find books on the shelves. 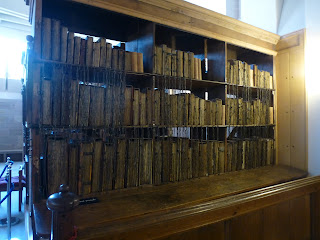 The Mappa Mundi, showing the world and heaven as they were understood in the Middle Ages. It is the largest complete world map drawn on vellum known to have survived from that time: 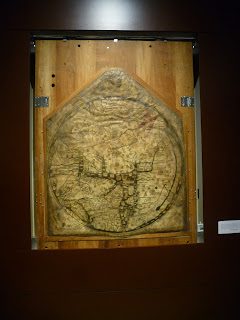 The Old House Museum. Built in 1621, it was restored and now depicts Jacobean life. 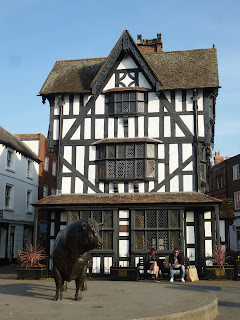 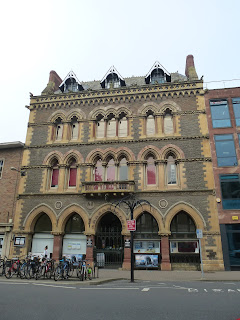 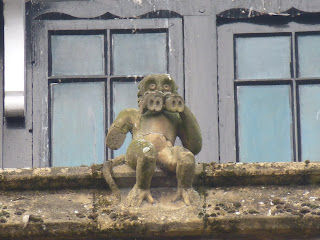 On Sunday, we drove to Hay-On-Wye, famous for its Literary Festival: 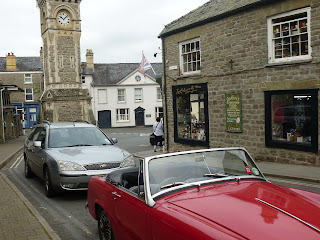 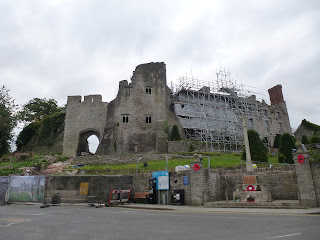 One of the many second hand bookshops in Hay. I bought a copy of 'Larkrise to Candleford' as a souvenir. I've never read it, nor seen the TV programme, but am assuming it must be good if it has been televised. 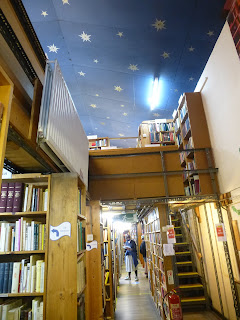 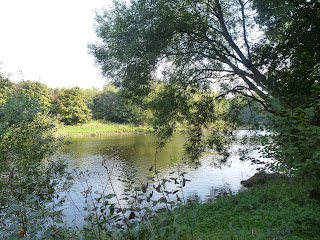 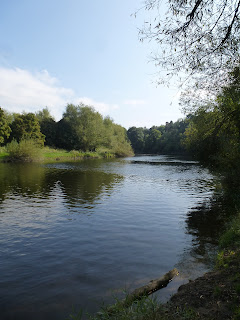 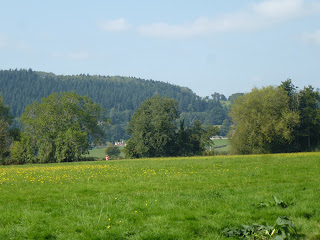 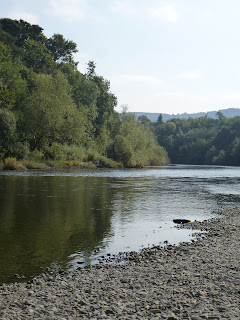 After leaving Hay, we visited Arthur's Stone, a Neolithic chambered tomb, over 5000 years old. According to legend, it was here that King Arthur slew a giant, who left the impression of his elbows on one of the stones as he fell. It was also thought to have been C.S.Lewis' inspiration for the stone table in the Narnia books. Then again, I've heard that said about the stone table in the gardens of Merton College in Oxford! 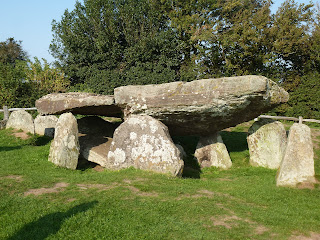 We went for a walk down the Golden Valley. It reminded me about the film 'Shadowlands' and I wondered if it was the same one ....... it was! Apparently, C.S.Lewis had a painting of the Golden Valley on his bedroom wall  when he was a boy. He thought it was a picture of Heaven and didn't realise until later that it was an actual place. For the film, they used a view from Symonds Yat (see below!) as the valley wasn't considered picturesque enough! It is thought to be called Golden Valley because of the River Dore that runs through it. It is actually the Welsh name for water (dwr) but the Normans thought it was the French word 'd'or' meaning golden. 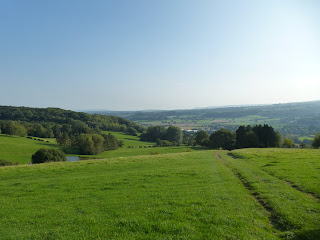 After seeing the actual Golden Valley, on Monday we took a walk at Symonds Yat: 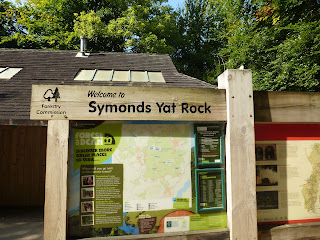 OK, so it is quite a nice view! 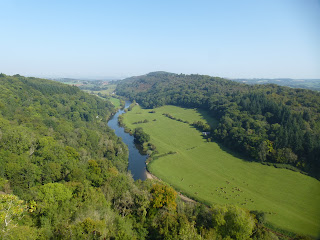 We planned our circular walk, going along one side of the valley, across a scary bridge, back along the other side before crossing the river again by a hand ferry. As it was quite a long walk, I suggested to R that we do it in reverse, just to check that the ferry was operating in these Covid times. He assured me that they would have put up a sign if it wasn't, so off we set. You can imagine my expression when, after completing 95% of the walk, the ferry was closed and we had no option but to turn around and walk back the way we had come - crossing the scary bridge for the 2nd time! The vertical climb back up the valley at the end nearly finished me off and I needed a vegan sausage roll from the cafe to recover! :O) 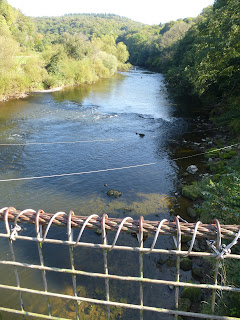 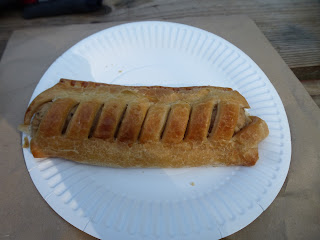 Bridget in the Forest of Dean: 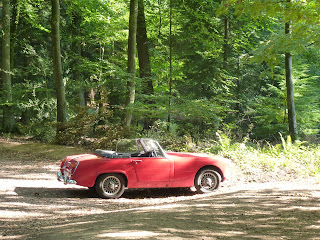 We came home on Monday evening, popping into Ross-On-Wye on the way. It was a glorious few days away, seeming much longer than a long weekend, and I'm so grateful that we were able to make the most of the last of the sunny weather.
Anyway, back to normal life ......... I'd better go and check on that washing!
Toodle pip for now. x
Posted by VeggieMummy at 07:40