There's more than a whiff of hygge in the air at the moment. Autumn is my favourite season - not the constant rain that we've had this week, but the cool, crisp mornings with a hint of mist or frost. The changing leaves, the darkening evenings and the feeling of hunkering down for the colder weather to come. We lit the stove for the first time last weekend and I sat knitting whilst R and I listened to 'War of the Worlds' on Audible; it was bliss. Admittedly it was short lived - after a while I pointed out to R the number of times that the words 'tumultuous' and 'multitude' were used and the spell was broken. Apparently, I was spoiling one of his favourite books! We've finished it now and the jury's still out on our next choice.

Here then are a few photos of my October so far: 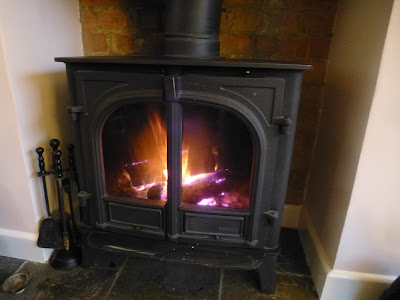 A trip to the cinema to see this. It's the one woman show, first performed at the Edinburgh Fringe, that inspired the television series. R was underwhelmed and I, having seen the TV series, was a little disappointed. I think I missed the asides and knowing glances to the audience, as well as the all star cast playing the other characters. 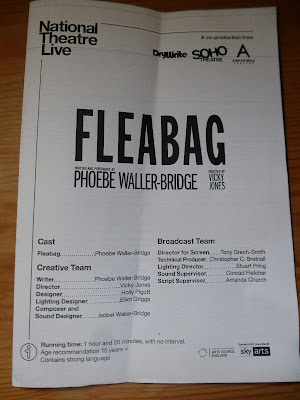 A walk up Beacon Hill to pick blackberries: 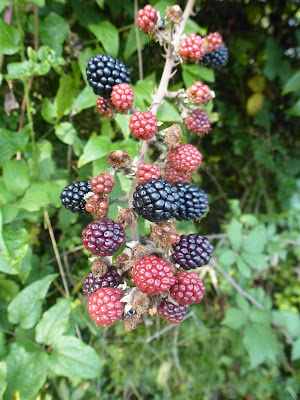 The view from half way: 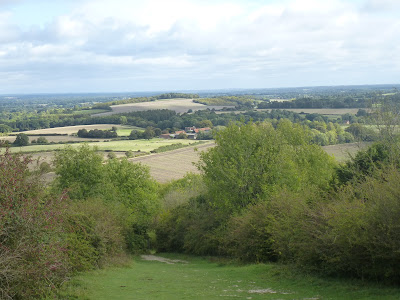 Highclere Castle (aka Downton Abbey) in the distamce: 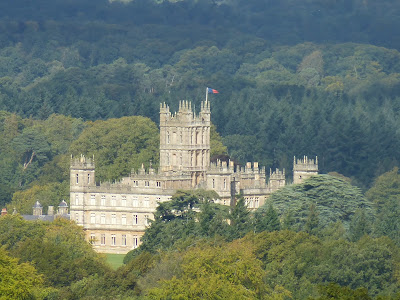 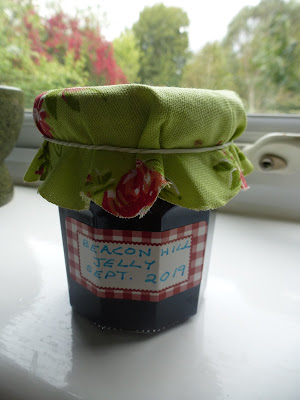 A bit of paper crafting for Christmas - this year we are having a low waste affair, with everything being either homemade or second hand. I'm a regular at the local charity shops at the moment! 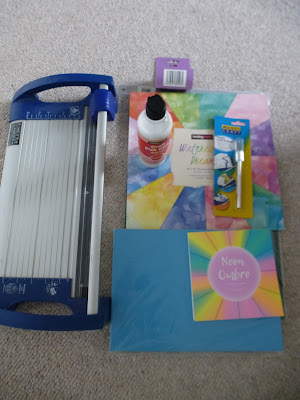 Burnham beeches when I went for lunch and a walk with my friend C: 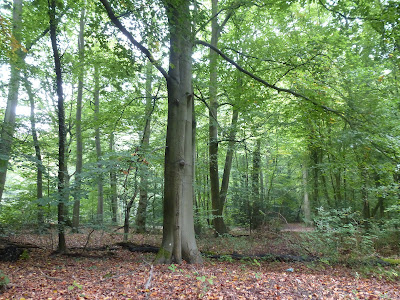 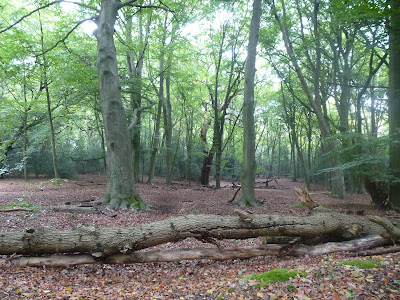 At the Southern Wool Show a few weeks ago, R chose some yarn for a hat. This is the finished article, although he won't be receiving it until Christmas. (Homemade!) 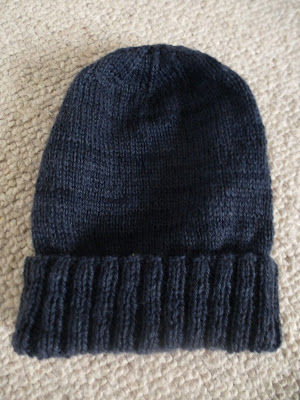 It might be Christmas knitting, but it has a definite autumnal feel: 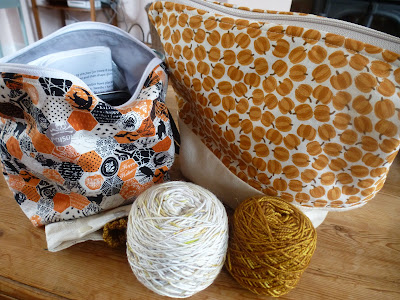 There is currently a Ladybird Books exhibition at The Base in Greenham Common. R and I went along and spent a merry couple of hours lost in nostalgia. I used to collect these when I was pregnant and then when the girls were small. Judging by how much they were charging to buy old copies, I must have a fortune stashed away in the loft! 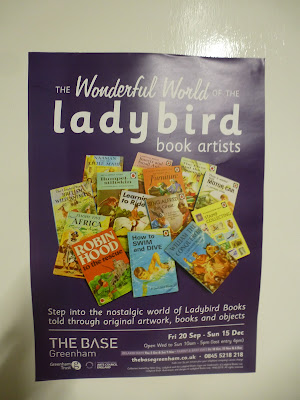 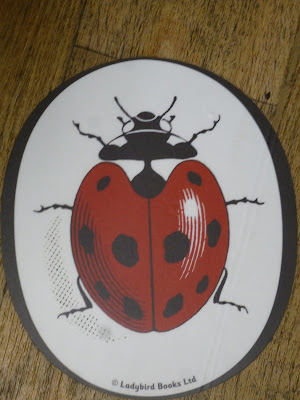 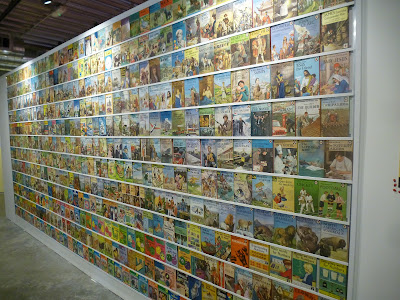 The appley jamboree that is our local Apple Day! 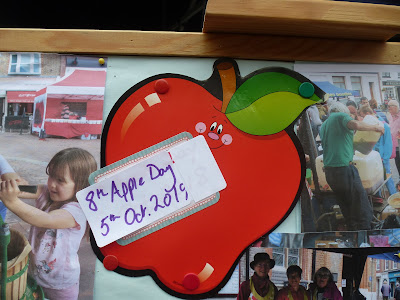 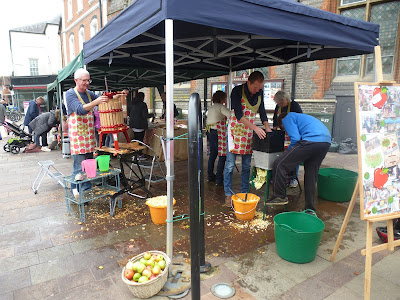 This time last year R, E and I bought tickets to see The Great Britain in Bristol. The tickets were valid for a year and, as they were close to expiring, we decided to pay another visit. 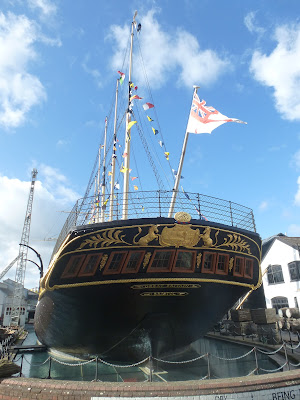 Lunch at the Calypso Kitchen: 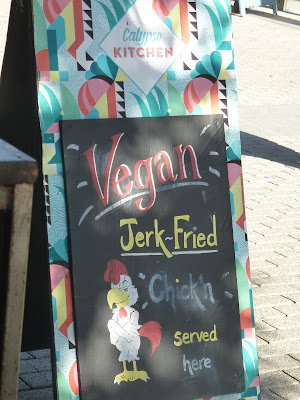 I quite liked R's jerk 'chick'n' but my vegetable gumbo with ackee and plantain was delicious: 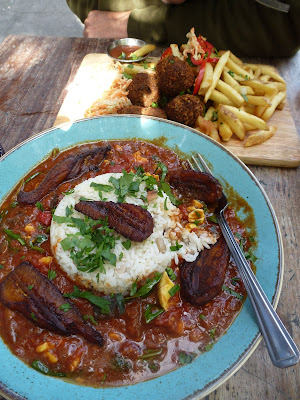 A trip to the Ally Pally to see this: 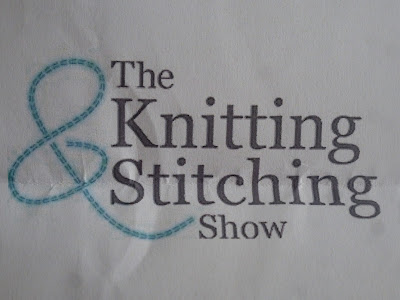 I'm a bit snowed under with Christmas knitting at the moment, so went with sewing in mind. I needed some fabric for a dress pattern that I have, and also some upholstery fabric to cover the footstool that I bought at a car boot sale earlier in the year. I managed to find some acrylic yarn for a hat for E - despite following a plant-based diet, I have no problem with wool. Not so E, she takes it all very seriously. 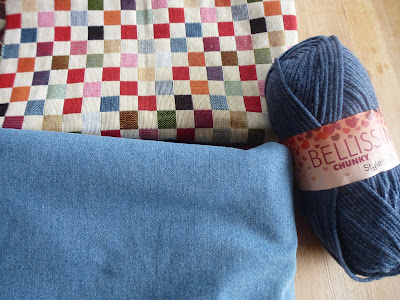 Look what I saw at the Stylecraft stand: Josie Kitten's 'Good Striations' blanket. To be honest, I had to visit the stand twice to get near this feast for the eyes - the first time I couldn't get near it as it was so popular. Second time round, and with tactical use of the elbows, I managed to get close enough to have a squish. It was heavenly; just the thing for snuggling under on the sofa or adding as an extra layer on the bed. The waves represent bundles of striated muscle fibres and, if you fancy knitting your own blanket, more information and details about the pattern and yarn packs can be found here. There are also patterns for a cushion and some snugly socks. There is 25% off the price of the pattern throughout October and Helen will be donating a % of the money raised from the patterns to Myositis UK. 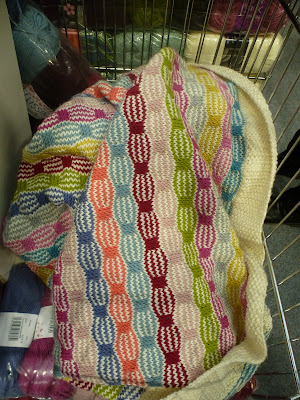 Attending a calligraphy workshop at our local cafe. My handwriting is appalling so I went along with slight trepidation, but Milly, the tutor, assured us that the process is more like drawing the letters than writing. We spent a couple of hours practising shapes, then letters and finally words in the notebooks, using the special pens provided. It was great fun and I'm hoping to find time between my Christmas knitting to fit in a bit of practice. 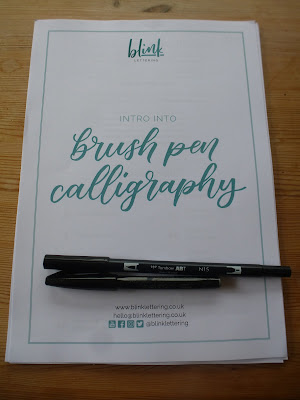 Finally, R and I attended a 'fire garden' to celebrate 10 years of outdoor events in our town. There were displays in the market square, in the church and on the canal. I just wonder how they got permission on health and safety grounds, as there were a lot of children around the ground level fire pits which were spitting and showering sparks in the drizzle. I hate to think what it would have been like had it been windy. Having said that it was a lovely evening, with a real sense of community spirit. 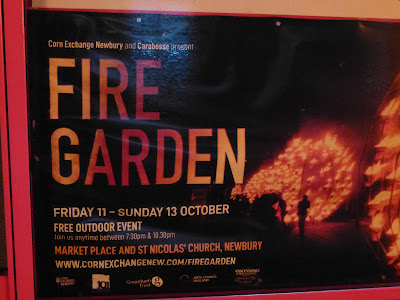 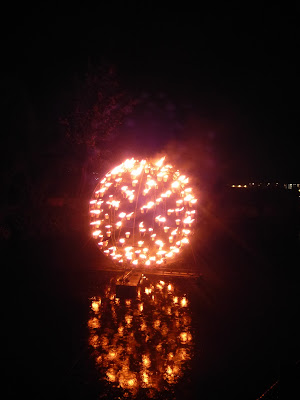 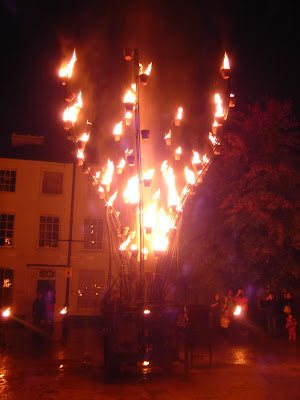 Well, that's it for this week. Wishing you all a cosy October. I'm just off for a hot chocolate!
Toodle pip for now. x

Posted by VeggieMummy at 07:45