I'm currently stuck at home feeling sorry for myself. The reason for this is twofold:

Firstly, R was doing a bit of car maintenance at the weekend and whilst trying to remove the back plate (see me trying to sound knowledgeable!) he inadvertently snapped the head off not one but two bolts. The bolts were big, the bolts were weight bearing, the bolts were probably helping to hold the wheel on! I'm very attached to our car. We've had it for more years than I care to remember and I did school runs twice a day in it, first with both girls and then, when L went off to uni, it was just E and me. We've listened to hours of Classic FM in it, I've tested E on her stuff pre-exams, knitted, chatted to friends and filled umpteen Sudoku books whilst sitting in the school car park, and quaked in it whilst waiting for her to emerge clutching those all important exam results. In short, I love my car (her name is Lily by the way; the girls named her not long after she became part of the family). She has a bauble with her name on it that hangs from the rear view mirror during advent; a one eyed fluffy chick called Ford Jarvis (don't ask!) that cheers her up at Easter; a model Eiffel Tower from her trip to Paris, and various flowers that the girls have made over the years. For some time now, R has been suggesting a new one. I know friends of mine who would jump at such an opportunity and who would be test driving new models quicker than you could say scrapyard. But Lily and I are a team. Any talk of getting rid of her sends me into a decline, so R rolls up his sleeves, orders yet another new part and makes my Lily better again. This time though, even I am sensing the end is near and it's breaking my heart - and yes, I am aware that it's an inanimate object and I'm a lucky girl that I don't have anything more serious to be upset about.
I don't drive Bridget the Midget, so with Lily out of action, I am walking where I can and am mostly stuck at home. There is more than a whiff of cabin fever in the air.

This week, however, being confined to barracks hasn't been too bad, owing to reason number 2: I have a urinary tract infection, my second in last few months. Last time I dutifully took myself off to the GP Surgery and was told to go home, drink plenty of fluids and take paracetamol if necessary. All good advice and after a few days it did actually work. This time, I didn't even bother going. I'm drinking water like there's no tomorrow and it does seem to be improving. Good job really - with no car, I didn't fancy braving the high winds and battling in clutching my little sample, especially when I was in the feverish, shivering stage.

So, here I am attempting to throw off my funk by focusing on the positives. Here then, are my September happies:


R and I took a trip back to The Historic Dockyard in Portsmouth to visit The Mary Rose. He had never seen it before, and the last time I saw It was when E did her work experience there and it was still covered in big, black ducts drying out. What amused me the most was what we both found interesting - he was all about the ship itself, whereas I liked all the personal artefacts found on her - shoes, a backgammon set, bowls with the owner's mark on them etc. 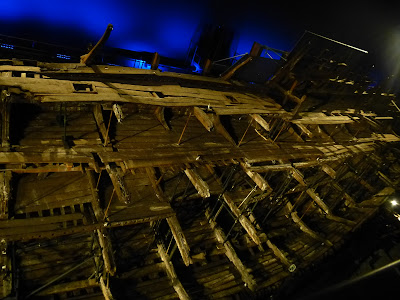 Picking our glut of Bramleys. We've had baked apple and pie already this week, and I'm not usually a great one for puddings. I tried giving some away at the gate, but there weren't many takers. One woman passed as I was putting them out and when I asked if she would like some, she looked at me as if I was the wicked Queen in Snow White! 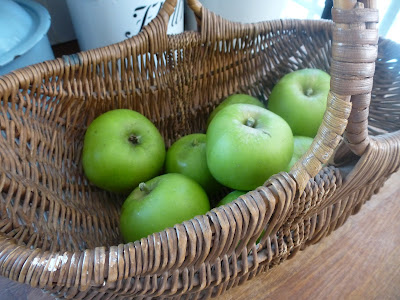 My car boot treasures - I love Cornish pottery but R isn't that keen and thinks it's far too expensive. He couldn't really complain about my car boot bargain though, even if it is missing a lid. 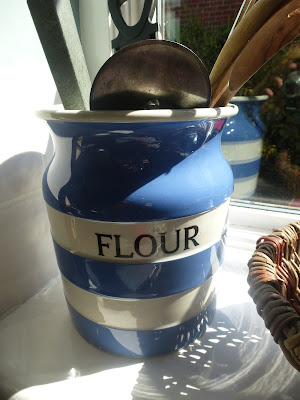 Another foot stool. I bought this for a specific reason - I've signed up for a one day upcycling course at our local college next year and need a small item of furniture to work on. I'm hoping this will be suitable. 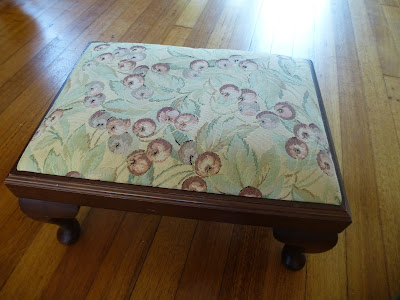 Marrow and Ginger jam - not a great triumph; I find it far too sweet. 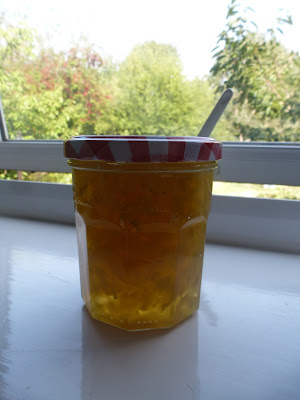 A new discovery - a vegan cafe has opened up in town. Not only is it vegan, the owner has Coeliac Disease, so it's all gluten free.....and raw. Now that takes dedication! 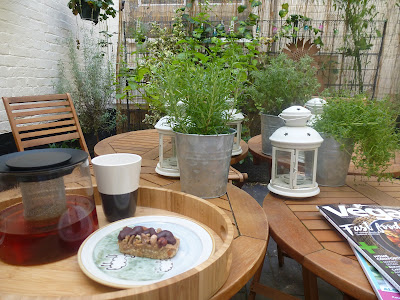 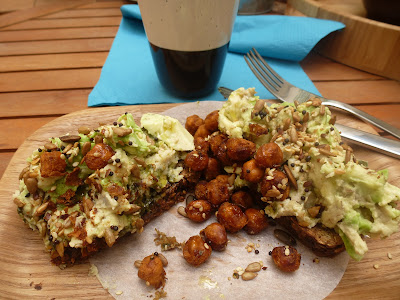 Knitting my friend, S, a pair of fingerless mitts. We met up in Bristol a few weeks ago and, as the day was unexpectedly chilly, she was able to wear them straight away. I almost regretted giving them to her as we shivered our way round! 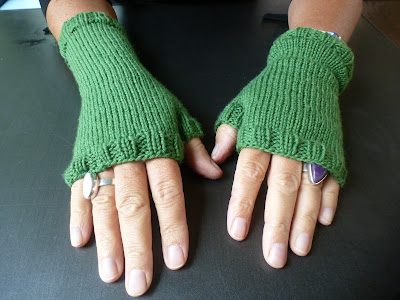 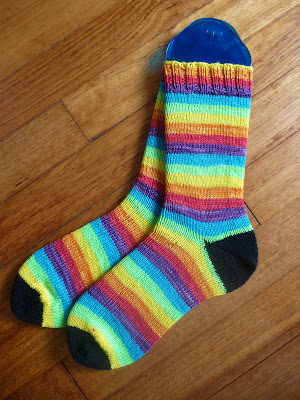 A French Market came to our town. It all smelled divine, but I managed to resist the selection of yummy looking cheese and bought a garlic braid which is currently hanging in my kitchen. 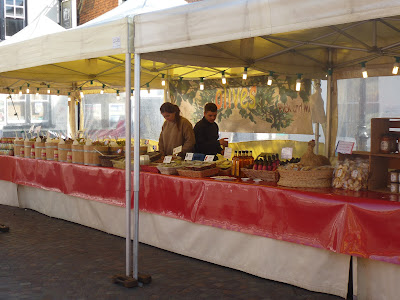 Stocking up for the winter: 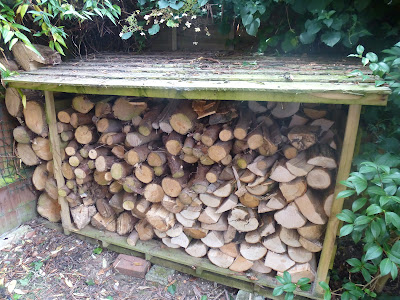 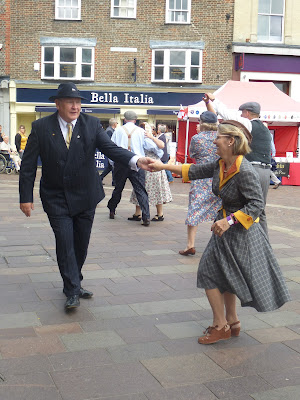 Last time E was home, she expressed an interest in knitting. 2 friends of hers at uni have regular knit nights and she wanted to join in. Well, I had her straight round to our local yarn shop before she could change her mind. She chose some self striping yarn, a circular neeedle and..... Ta-Dah! They even match. I'm such a proud Mummy! 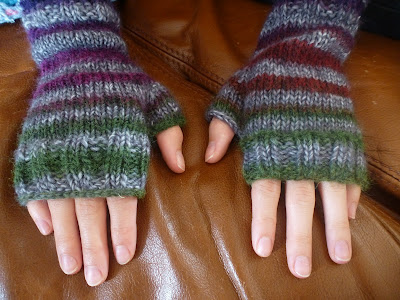 We celebrated with a Japanese lunch. 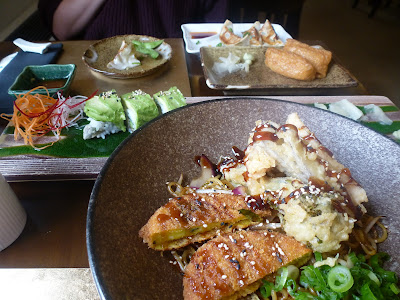 My new scented candle and a free tea light - both smell heavenly: 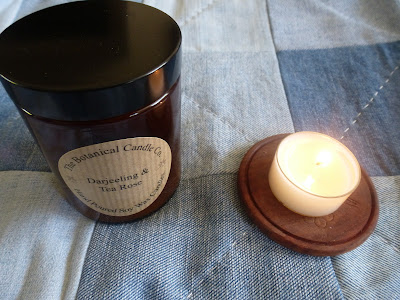 Can you tell I'm feeling the autumn vibes? 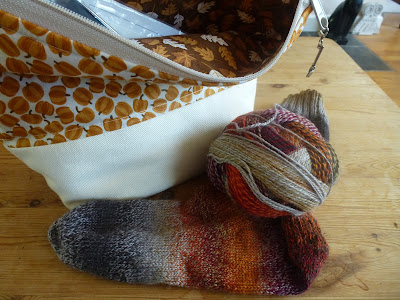 I finally managed to persuade R to paint our shed something other than brown - he does love a nice brown shed! Now, do you think it might be possible to sneak a bit of bunting past him?! 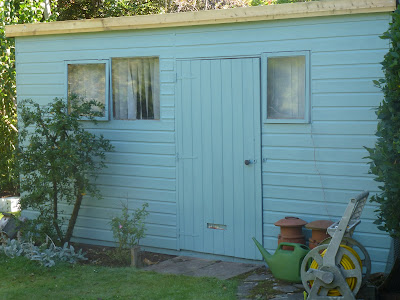 A one day pottery workshop in Whitchurch. We spent the morning hand building a pot and the afternoon playing on the wheel; it was just like The Generation Game! I'll show you my finished items when they've been fired. 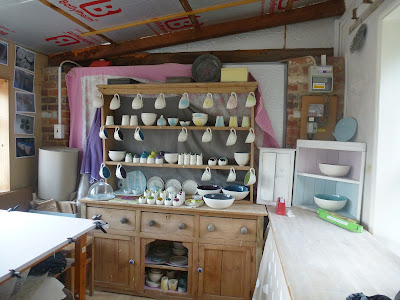 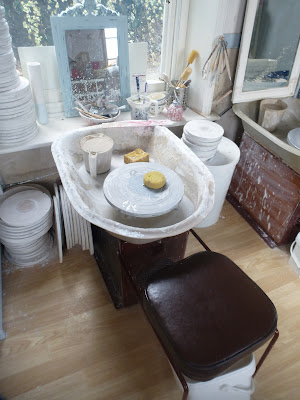 A weekend walk around the Ashdown Estate: 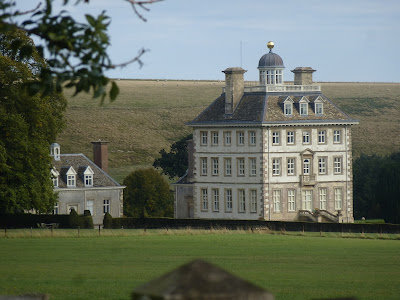 Finally, a book recommendation. I spent Tuesday snuggled up on the sofa wrapped in a blanket, clutching my hot water bottle and reading this. I loved every page ............ apart from the bit about the deer. I'm sure it had some symbolic meaning and was important to the plot, but I found that bit quite distressing. It may have been because I was running a temperature at the time! 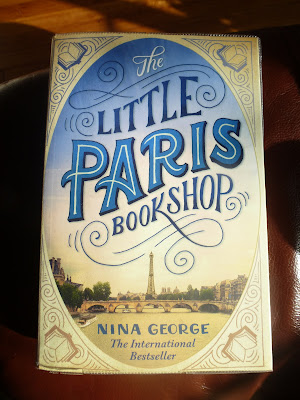 Well.that's all my happies for this month so far. I also enjoyed seeing Saturn near the moon a couple of days ago, but don't have a picture of that. Our local free magazine always has an astronomy section telling you what to look out for. Apparently, Mars is very bright tonight. I'll go now, as I'm beginning to sound like a centaur in the Harry Potter books!

Toodle pip for now. x
Posted by VeggieMummy at 09:52