Shakespeare, a Maze and Some Yarn

Well, Hey Nonny Nonny, it's the time of year when we go en famille to Stratford Upon Avon for our annual Shakespeare fix. Being creatures of habit, our trip usually follows roughly the same format: arrive late morning, lunch from the Baguette Barge on the river, hire a rowing boat, potter round the shops and town, an early dinner and then the main event - the play. Usually, we go late July or early August and we have ALWAYS been lucky with the weather. This year, owing to various exams, holidays etc. we went in September ........ and it rained on and off all day! Being English, however, we're used to the odd drop of the wet stuff and had come prepared. Cagoules were donned and, apart from eating lunch inside, the day followed its usual pattern. 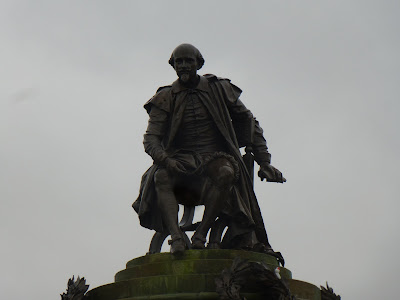 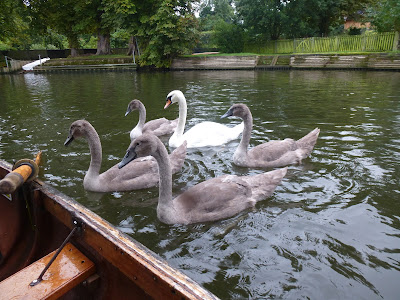 The play we had come to see was this: 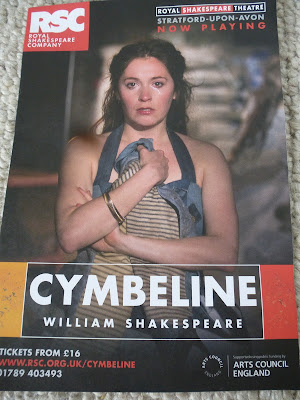 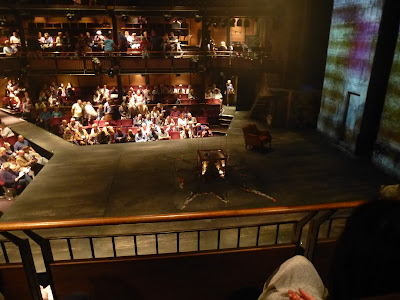 Very good it was too. There was the odd adaptation - I always thought Cymbeline was the 'King' of Britain!- but we thoroughly enjoyed it nonetheless.

Also on our summer manifesto was a trip to Blenheim Palace, principle residence of the Dukes of Marlborough and birthplace of Sir Winston Churchill. This time, it was a sunny day and L, E and I packed a picnic and set off. 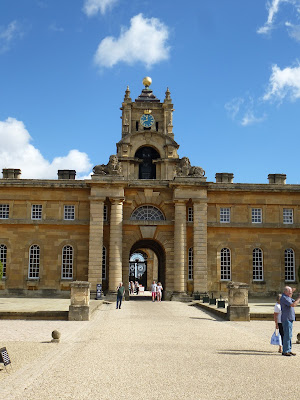 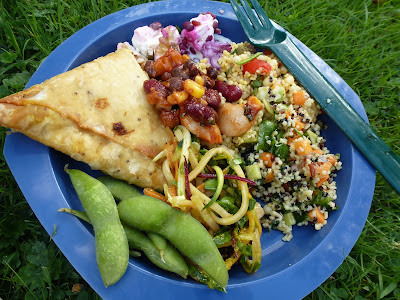 If you haven't been, it's a fantastic place for a day trip with children. You can omit the palace itself if you wish and just buy a ticket for the park and gardens. Your ticket can also be upgraded free to allow free entry for the  following year, which is what we did. There is a lakeside walk, a maze. a butterfly house, an adventure play area and a narrow gauge railway. 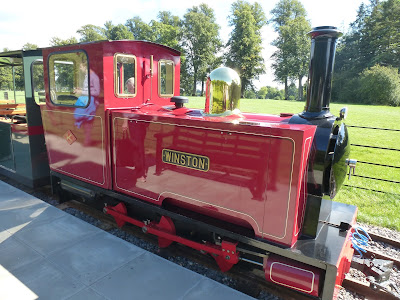 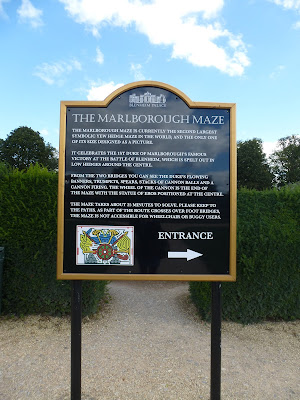 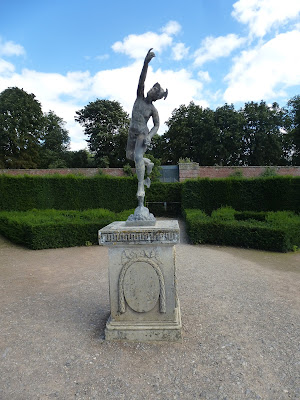 The butterflies were very friendly. Here's one on L's shorts: 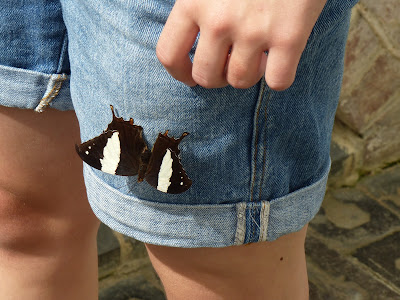 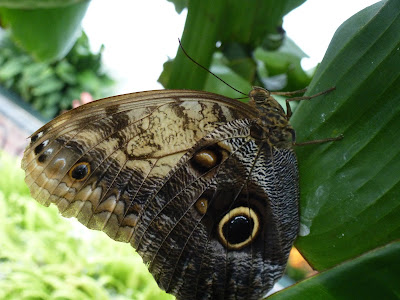 .... and one on my shirt. You have to check yourself before leaving, just to make sure that you don't have any hangers on! 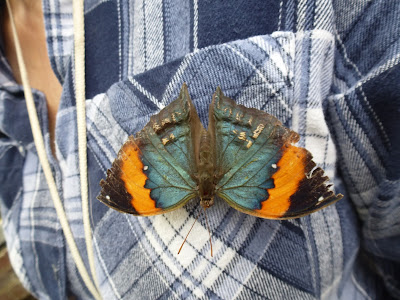 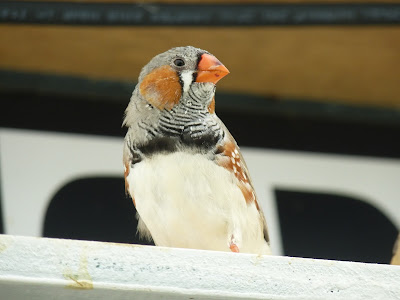 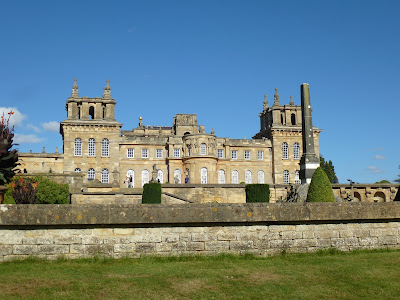 It was a really wonderful day out and we will be returning in November near L's birthday to do some of the bits we didn't get around to this time.

I finally got around to visiting 'Yarnfest'. A yarn shop on the edge of a local village that I have passed numerous times before, but never gone in. It's situated in an old telephone exchange building and is a little gem of a place. The lady running it was really friendly and chatty, but I went at about 2pm and she admitted that I was her first visitor of the day. At that rate, I'm not sure how they keep going. 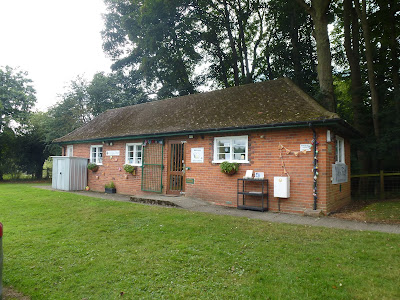 Being her only customer, it would have been rude not to make a purchase! I chose a ball of sock yarn and also treated myself to a new set of dpns. I usually use the set of bamboo ones that I bought in Oxford when I planned my first pair of socks, but some of the ends now have little splits in them that catch the yarn. These are metal Knitpro Zings and I really like them. It did seem a bit of a betrayal of my faithful old bamboo needles though - yes, I am a bit sad like that. 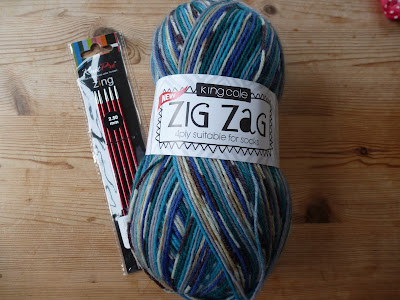 Enjoying a cup of Vanilla Honey tea. The project bag in the background is my travel one from Knitrundig - it holds my current sock project and is small enough to stuff into my bag when I'm out and about. 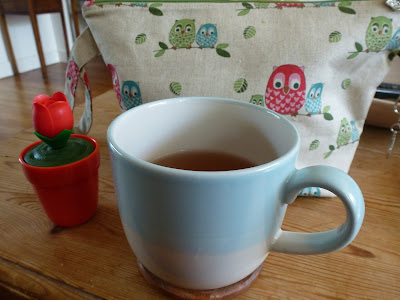 I have been bitten by the mini skein bug. These are Harry Potter inspired ones from Norah George. From top to bottom: Pumpkin Juice, Snape (yes, I was a little confused by that one, but I do love the colours) and Ravenclaw. 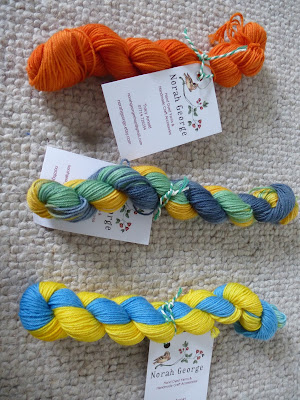 I'm hoping to advance my sock knitting a little. I'm only on my 4th pair and am still learning, so they have, until now, all been  very plain socks. I'm hoping to master the 'fish lips kiss' heel next though and would love to insert a different colour for that and maybe the toes or cuff. Hence the mini skeins. I'm also a big HP fan - but not of the new book 'The Cursed Child'; I found it such a disappointment and a bit of a swizz putting J K Rowling's name in big letters like that.

Finally, this week's library books. I would recommend the Sue Perkins autobiography for anyone who enjoys a good laugh out loud until you cry book. I'm also a big fan of the GBBO and am thrilled that it's back on our screens - I'm rooting for Andrew Smyth. 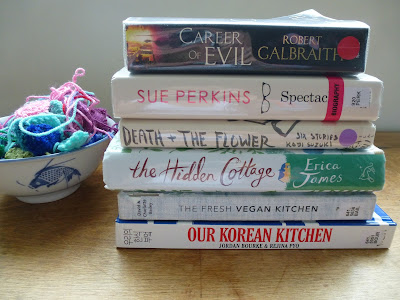 Well, that's all for this week. 'Parting is such sweet sorrow' as Shakespeare would say, but that bedding won't change itself!

Toodle Pip for now. x
Posted by VeggieMummy at 01:37