Well,  my 'Wheel of Colour' Cushion is finally finished. Some of you may remember that this little project of mine has not been without incident. The pattern was taken from Jane Brocket's book 'The Gentle Art of Knitting'. It's a lovely book with some great projects and I've never had any trouble following the patterns before. For some reason, though, this time I had a mental aberration, completely misinterpreted the instructions and my stripes ended up twice the width they were supposed to be. After a great deal of dithering trying to decide what to do, I pulled up my big girl pants and tinked the whole lot. It took me a few days to pluck up the courage to try again, but, when I did, everything was so much quicker - well, it would be I suppose as the stripes were half the size! Anyway, here's the finished result: 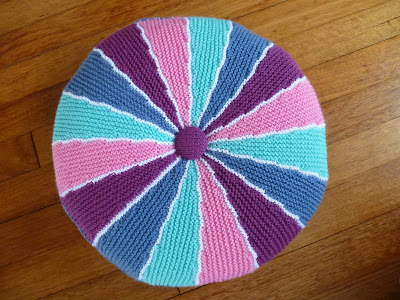 Trying it out for size on a dining chair: 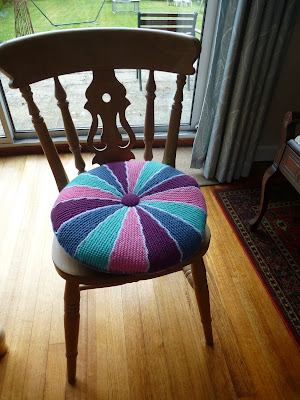 ........ and sitting with it's patchwork cushion buddy on the sofa: 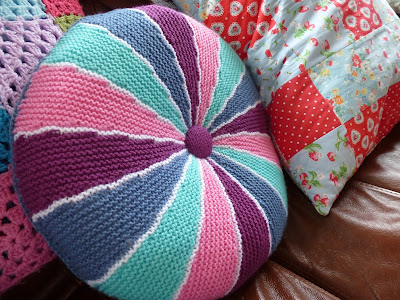 I joined the 2 sides together using a crochet DC stitch, rather than just normal stitching as recommended. This was only because choosing a colour of yarn to use was tricky - the colour changes so frequently and I found that my stitches showed through.
E has made no further comments about "the good ship 'Tasteful' having sailed", so I'm hoping that she likes it - I'm not going to go as far as to actually ask her, you understand; I feel that might be pushing my luck! I love it anyway - it's jolly and I just used leftover yarn, so it was cheap to make.

Other things that have made me smile this week:

The book pile to return to the library (there are some in the bag too!). E finally finished her A2 History coursework, so I was able to return all the books she had borrowed - Hurrah! Foolishly, I had let her use my ticket as that was the one most easily to hand and, consequently, I have had several months of trying to borrow books only to be told that my ticket was full! It was such a relief to take them all back I can tell you. 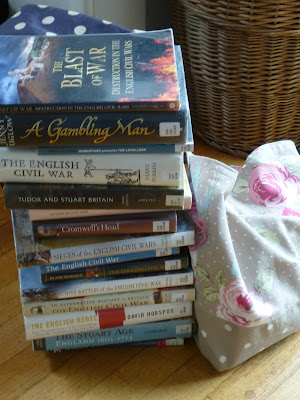 Much as I enjoyed the lovely sunshine that we had over the weekend, I have been loving the gentle rain over the past couple of days. It has soaked the earth nicely, so I'm planning a massive weeding session after dropping E off at school today. 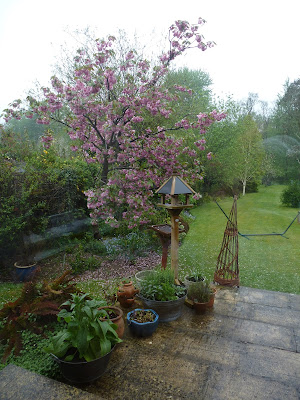 My Wisteria is starting to bloom: 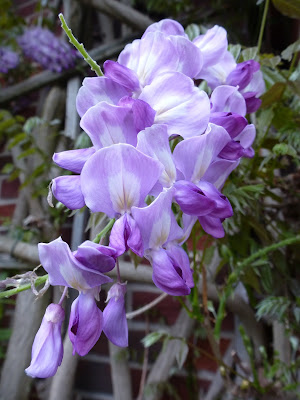 The chickens crowding round to watch me water the greenhouse - they like to peck at the water droplets as they run down the glass. These beautiful chucks are the same ones that we rescued via the British Hen Welfare Trust. They seem much happier now. 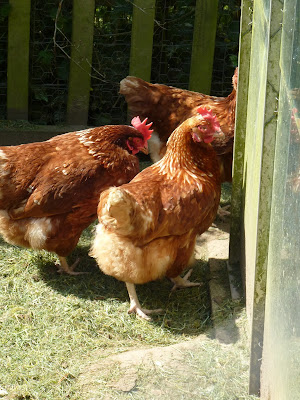 The first BBQ of the year, with a glass of cider to wash it down - perfect! 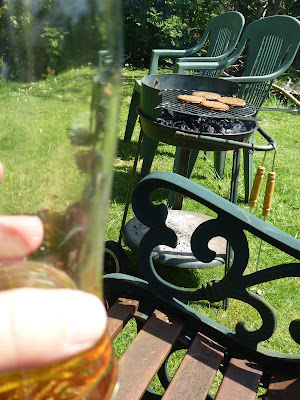 Finally, when I was having a little paddle in the river after my burger, E had a little play with my camera! That's L's 'Big Australian' hat that I'm wearing. 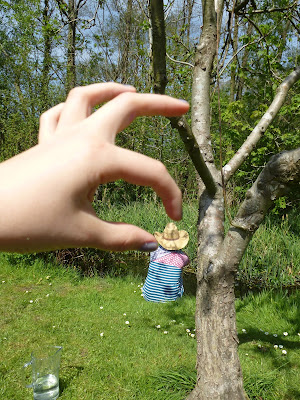 Well, that's all for this week. Whatever you have planned for today, I hope it's a good one.
Toodle Pip for now. xx
Posted by VeggieMummy at 22:38