On Saturday I went for a day out with my friend to Cliveden. I used to live near here so have been before but it was quite a long time ago; pre-children in fact. I'd forgotten how lovely it is: beautiful gardens, a maze to explore, several handy cafes and the river Thames nearby. The weather wasn't brilliant, there was the odd bit of drizzle, but it picked up as the day progressed and we had a fantastic time. This was the only Saturday that I could make this month - the rest being taken up by Uni open days for E. It was by happy chance, therefore, that we happened to be there to see the Royal Barge, Gloriana, arrive as part of a river relay to celebrate the 800th anniversary of the signing of the Magna Carta. It felt rather fitting as the last time S and I met up was a few months ago in Salisbury, where we saw one of the original copies of the MC in the cathedral. Anyway, here are a few photos of our day out: 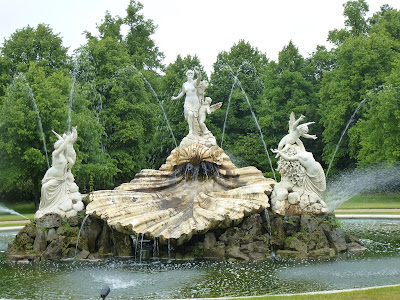 I feel as if we cheated rather in here - we did the trick where you keep one hand on the left hand side of the hedge as you enter the maze (or the right, I don't think it matters as long as you pick a side and stick to it) and it leads you safely through. Well it was nearing lunch time and we didn't want to get lost! 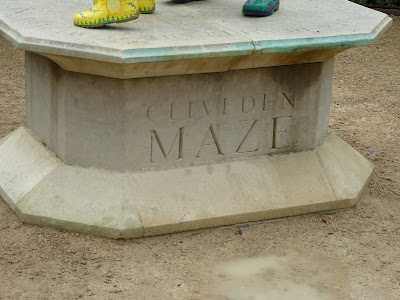 We watched this rather tame heron catching fish in the water gardens: 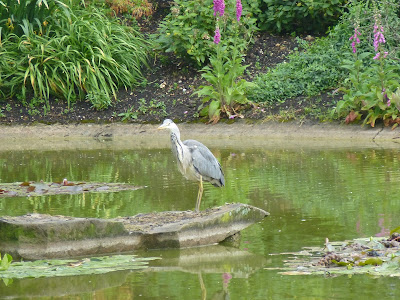 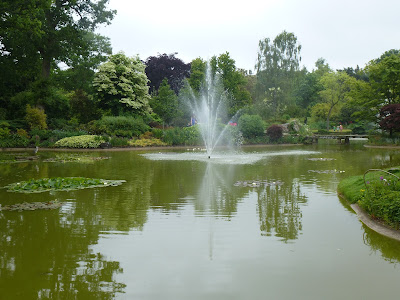 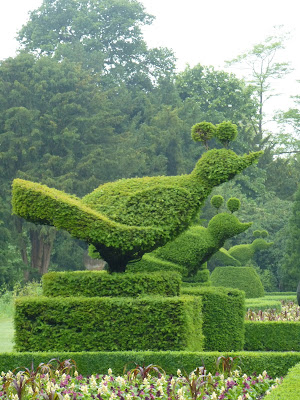 ... and admired the rose garden. It was beautiful but there were so many buds that I think we were a week too early to see it in its full glory: 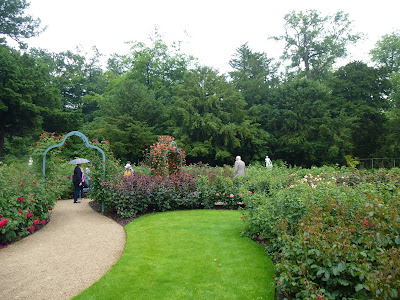 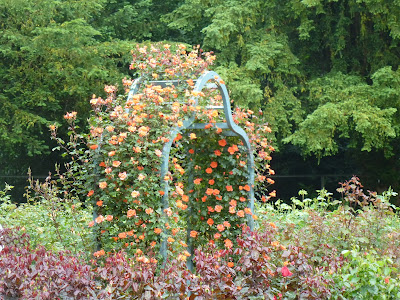 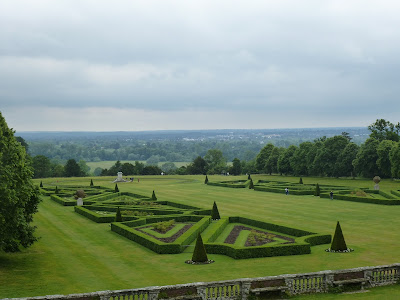 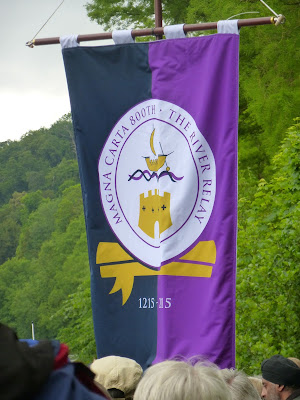 Here she is - Gloriana - commissioned as a tribute to Elizabeth II to commemorate her Diamond Jubilee: 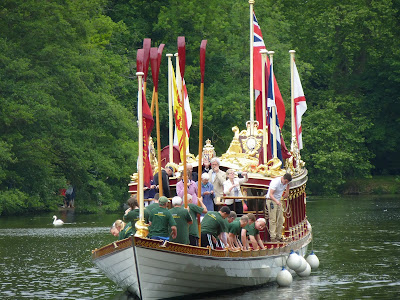 We ended the day with tea in a little cafe and I bought a fuchsia to bring home as a memento: 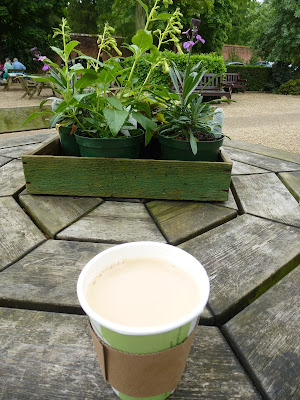 It was such a lovely place to meet that I thought I might join the National Trust so we can meet up and visit other properties. I had hoped to be able to use Tesco vouchers but you can only use those to join English Heritage, so I think I'll just have to pay up. Well worth it though. 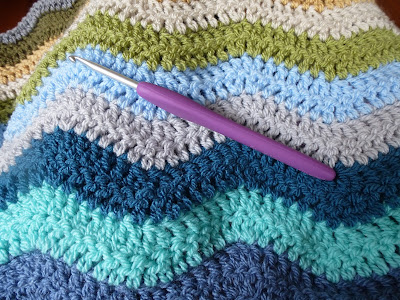 Trying out a no knead bread recipe - it turns out there's a reason you have to knead dough; it was rather heavy! 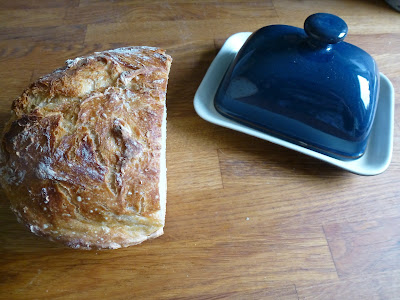 Finally realizing that I could hang my tea towel on the oven door rather than the radiator. I'm quite enjoying the little pop of colour. As they say, it's the little things! 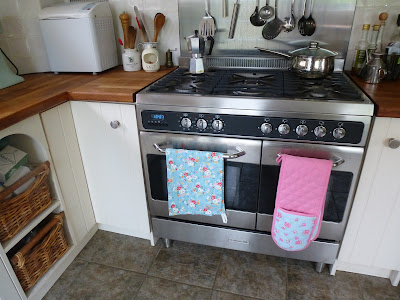 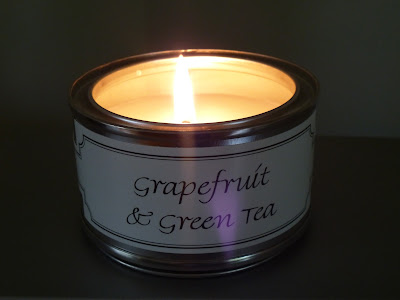 Rhubarb and Ginger Jam using the recipe from the B&B owner. It is nice but I think I'd use a little less sugar next time. 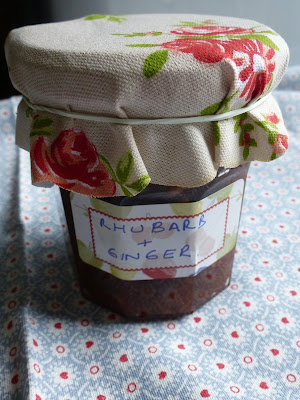 My new Perle embroidery threads and a few buttons: 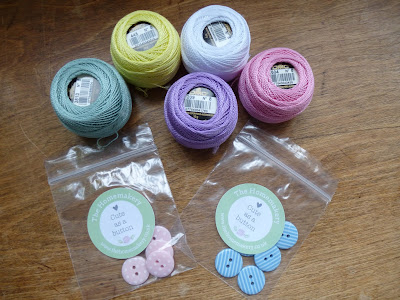 Finally, finishing my Winter primitive embroidery to go with the Spring one found in this post. Yes, I know I'm not exactly doing them in seasonal order! Also, the robin is a bit disproportionate but Hey Ho. 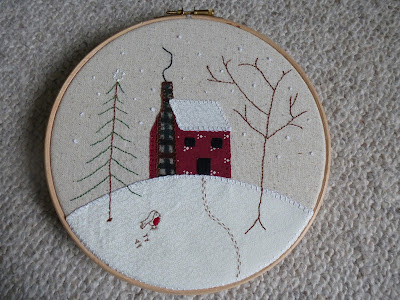 That's it for this week. After trying to find something to wear for L's graduation and seeing myself in the unforgiving glare and full length mirror of the changing rooms, I have decided to give the 5:2 diet a go! I've never had to lose weight before but the evidence of middle age spread was there for all to see. I'll let you know how it goes; at the moment it's not looking hopeful. I ate my porridge with WATER (not my usual milk and maple syrup) at 6:30 this morning - it's now 9:30 and I'm ravenous!
Enjoy the rest of the week.
Toodle Pip for now. xx

Posted by VeggieMummy at 01:40