'Use up the stash' Garden Throw

Greetings! I'm joining in with Planet Penny's 'Happy Friday' again. I feel very lucky this week because I seem to have had so many happy moments, it's been difficult to choose a favourite. I think, however, that it has to go to my 'Use up the Stash' Garden Throw. Since learning to crochet last year, I've made 4 blankets and have managed to accumulate quite a bit of stash. It seemed a pity to let it go to waste, so a quick visit to attic24 for inspiration and ...........
Ta-Dah! It's not as big as a blanket - hence the term 'throw' - and it was intended to liven up a wicker chair in the bedroom. Looking at the photo below, I think the cushion could do with a bit of a revamp too! 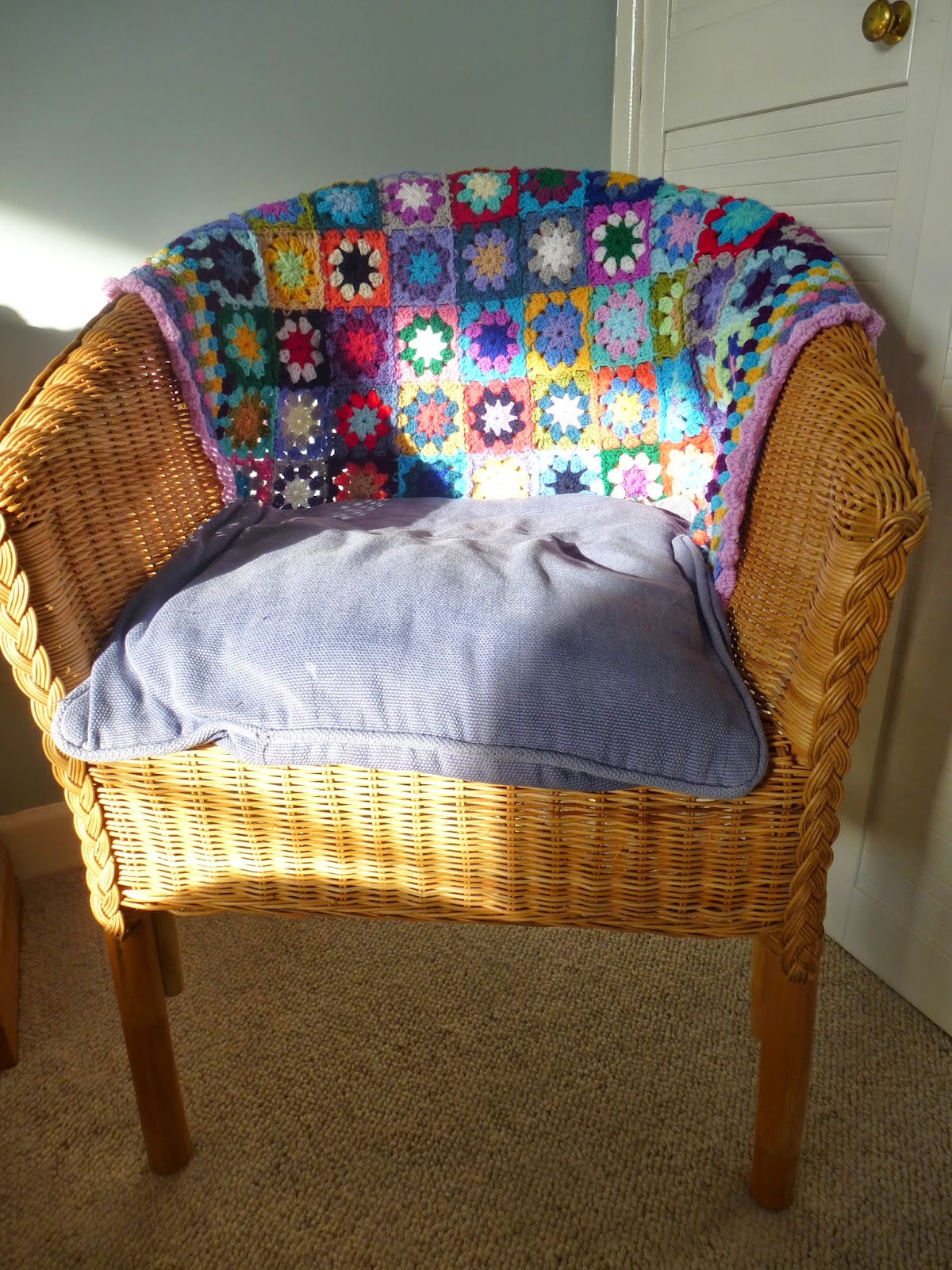 Thanks to Lucy, once again, for her fantastic and easy to follow tutorials. There does seem to be quite a bit of stash left, so I'm thinking maybe a picnic blankie next!

Other happies this week include:
An Oxfam find. This book has lots of lovely recipes which 'Minnie' and I are itching to try out. 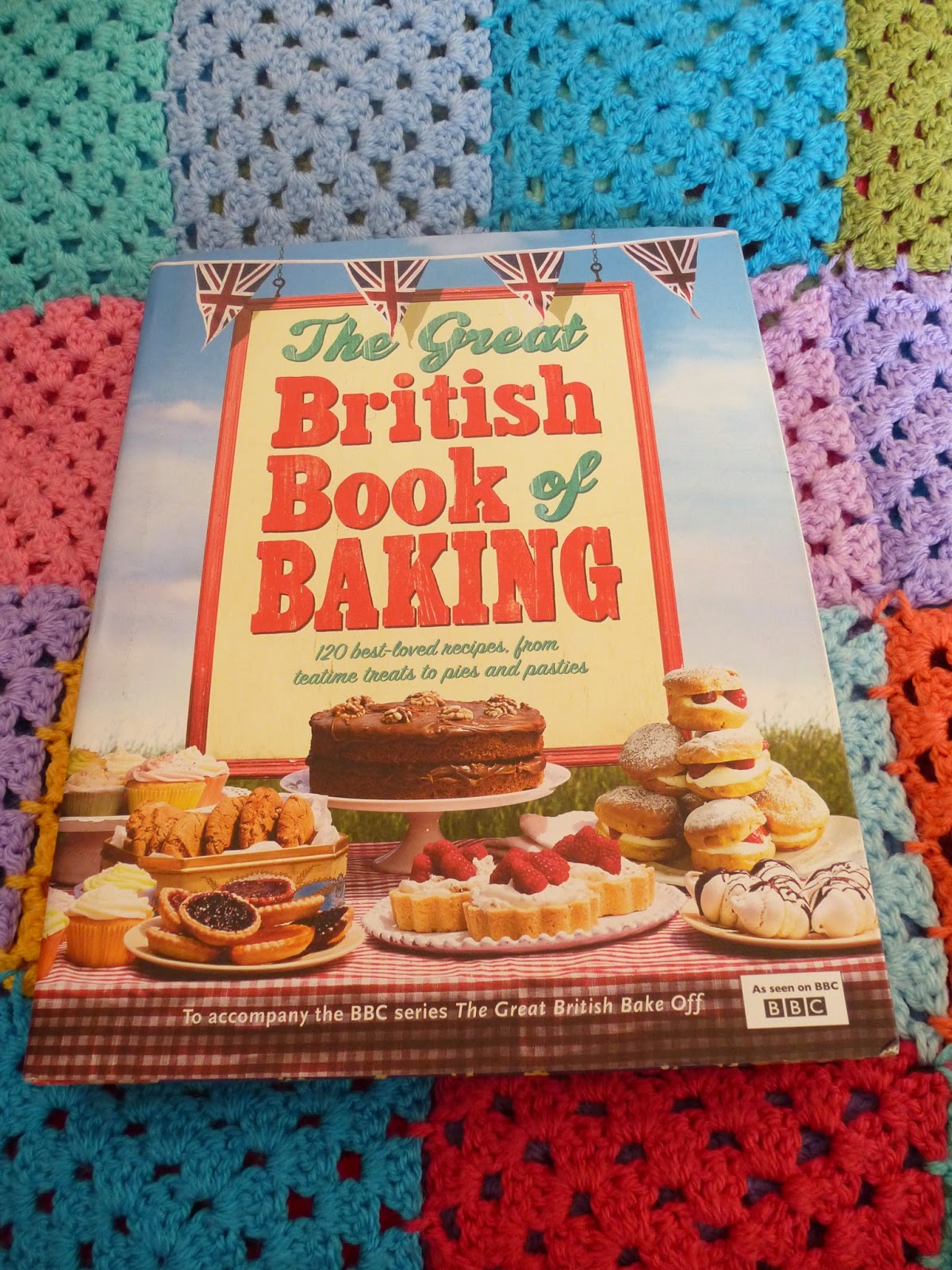 'Loaf of the Week' - Ciabatta: 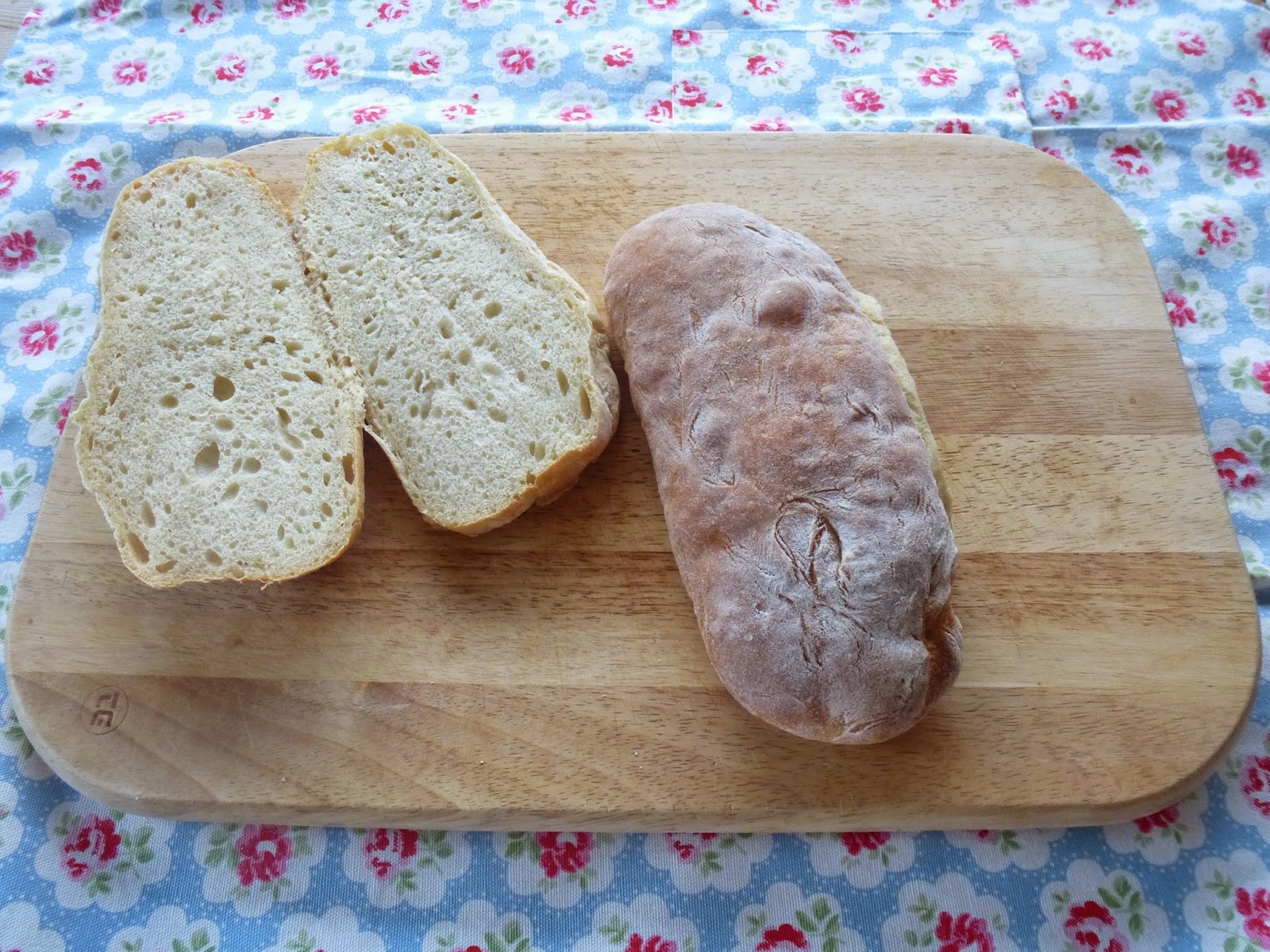 This was rather fun to make as the dough is incredibly wet and you think that it's never going to work. Paul Hollywood does seem to know what he's talking about though!


Kale crisps - I've been meaning to try these for a while. We like Kale and Hamish, the rabbit, goes mad for it, so there's usually some in the fridge. I did like these and felt rather virtuous tucking into them, as opposed to a packet of Walkers, the only problem was the smell - the house stank for the rest of the day. It was too cold to open the windows and, despite the best efforts of the extractor fan and my spruce scented candle, it did linger rather! 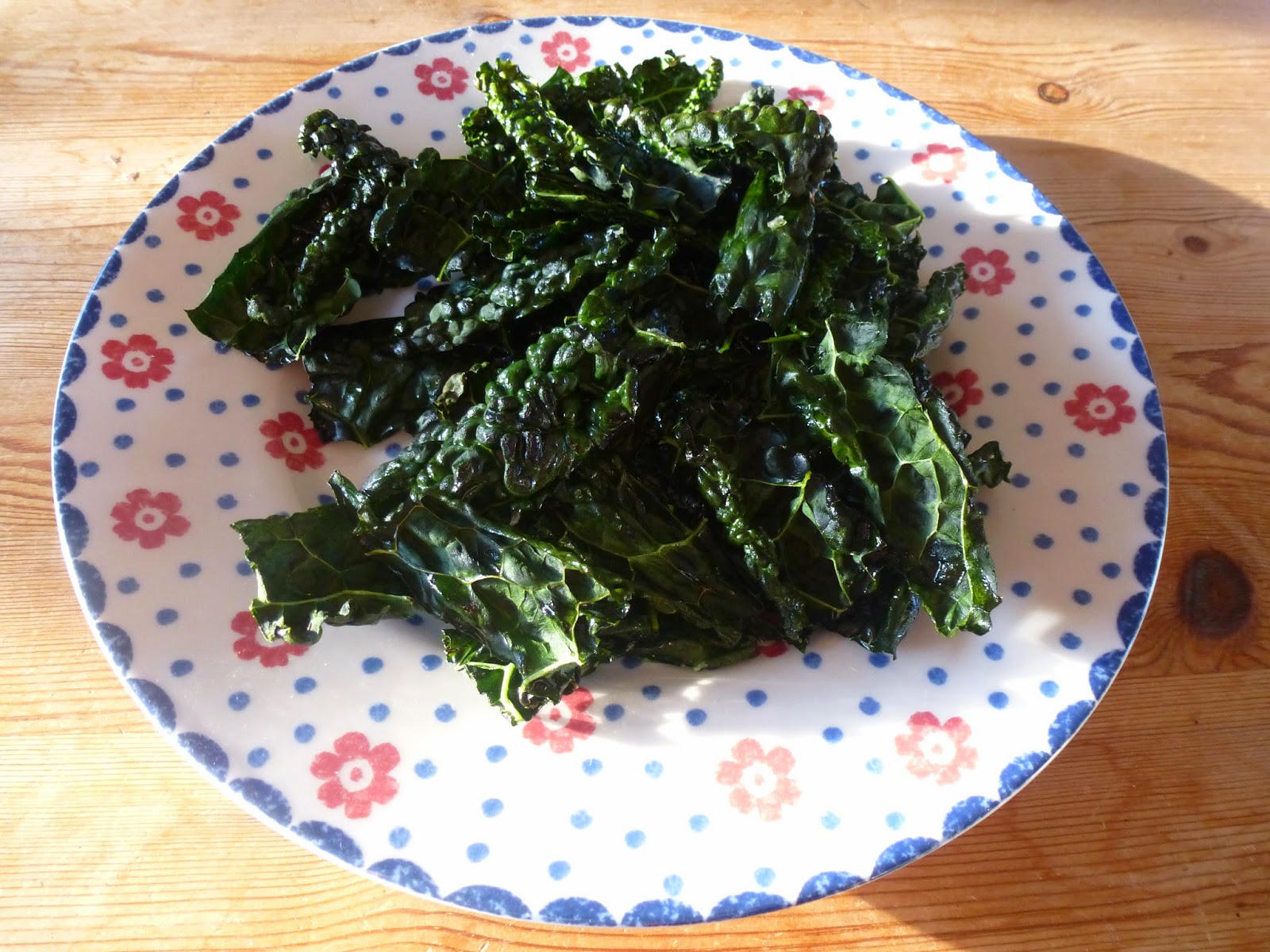 This week's selection of library books. I'm currently enjoying the new series of 'Broadchurch' on Monday evenings, so the top book is to refresh my memory of the first series. Having been to see 'The Theory of Everything' at the cinema (very good - watch out for the Oscar for Eddie Redmayne), I was inspired to get a Stephen Hawking book out. I have a feeling that it might go completely over my head but I'll give it a go. Finally, the quilting book is to give me some inspiration for the new quilt I have planned. I want to make a 'graduation quilt' for L in time for this Summer. 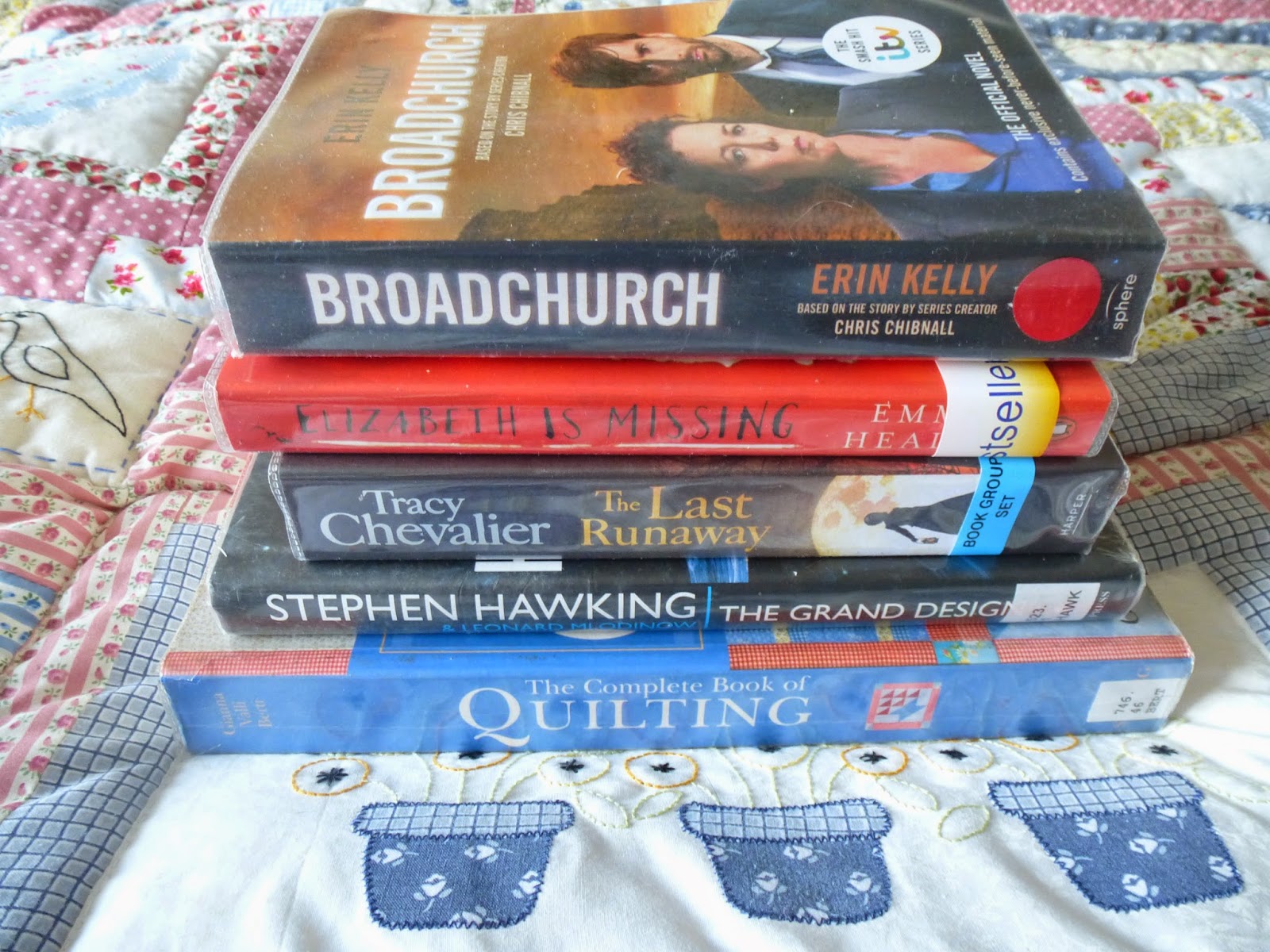 I thought she might go for blue and white and , when I asked her, that was her knee jerk reaction. On giving it more thought, however, she decided that she had quite a bit of blue stuff  (blankets and the like), so decided on greens and yellow. 'Spring-like' was the term used. Do you think these fabrics fit the brief? If you don't like them Sweetie - speak now! 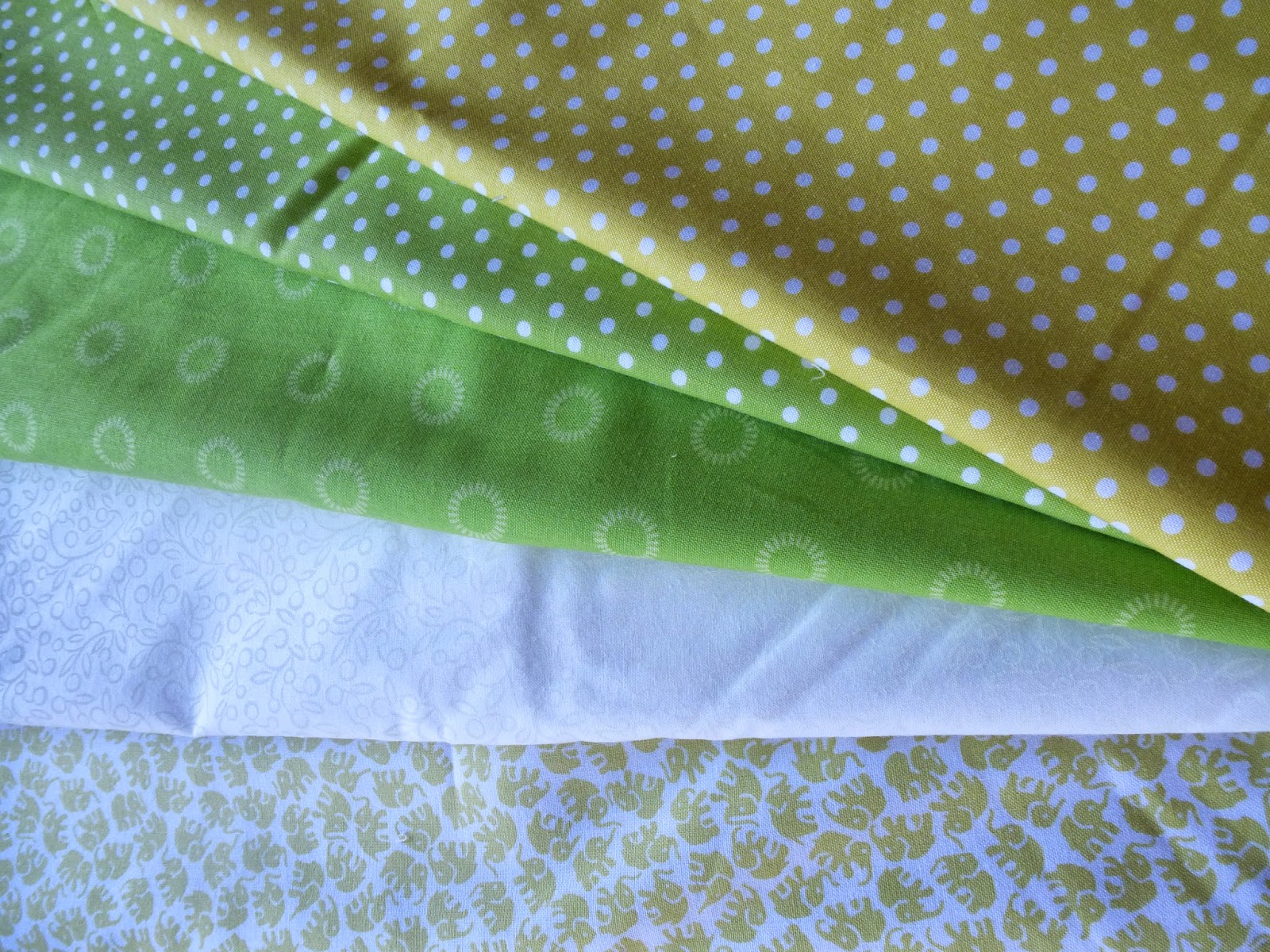 It's marmalade time of year again and it was made so much easier this year by a few jam-related Christmas presents. First was a Kilner preserving pan which means I'm not kept hovering anxiously, expecting it to boil over the cooker top at any moment.

Look at all the extra room I have! 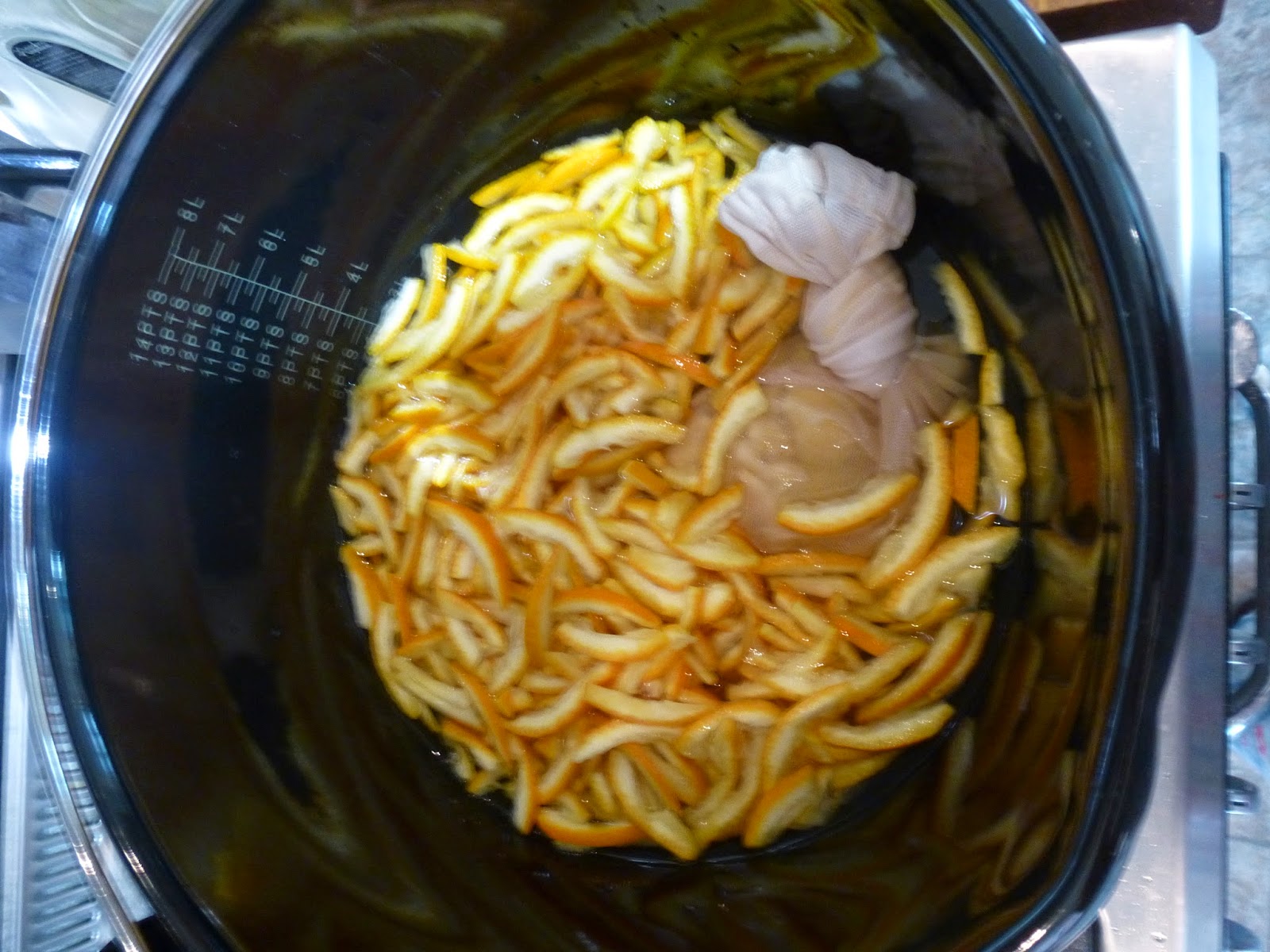 Second was a jam funnel, which made the whole process of jarring it up a doddle. Then, Santa also brought me some cute labels and fabric tops. 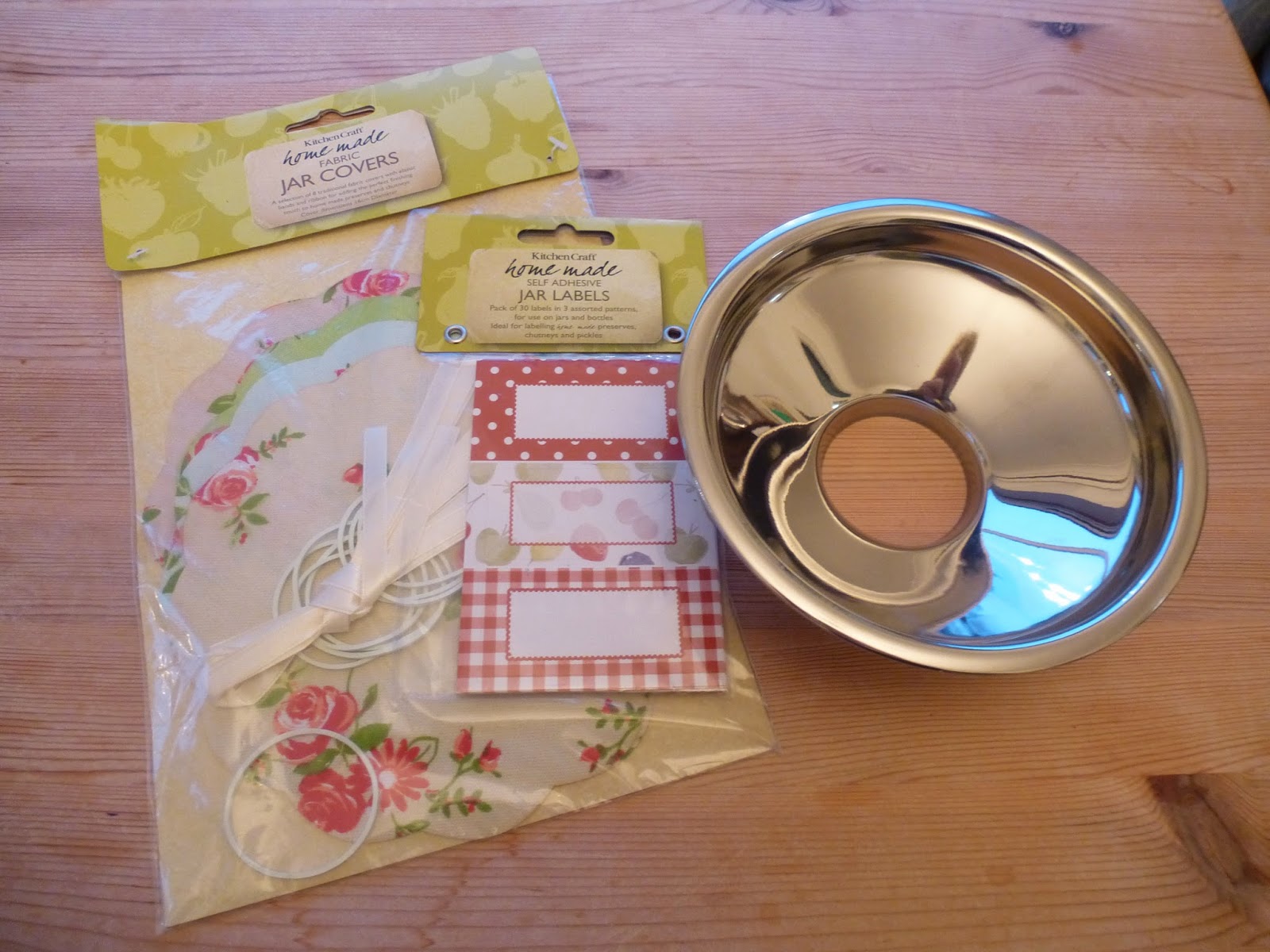 Here is the final product, after I'd had fun playing: 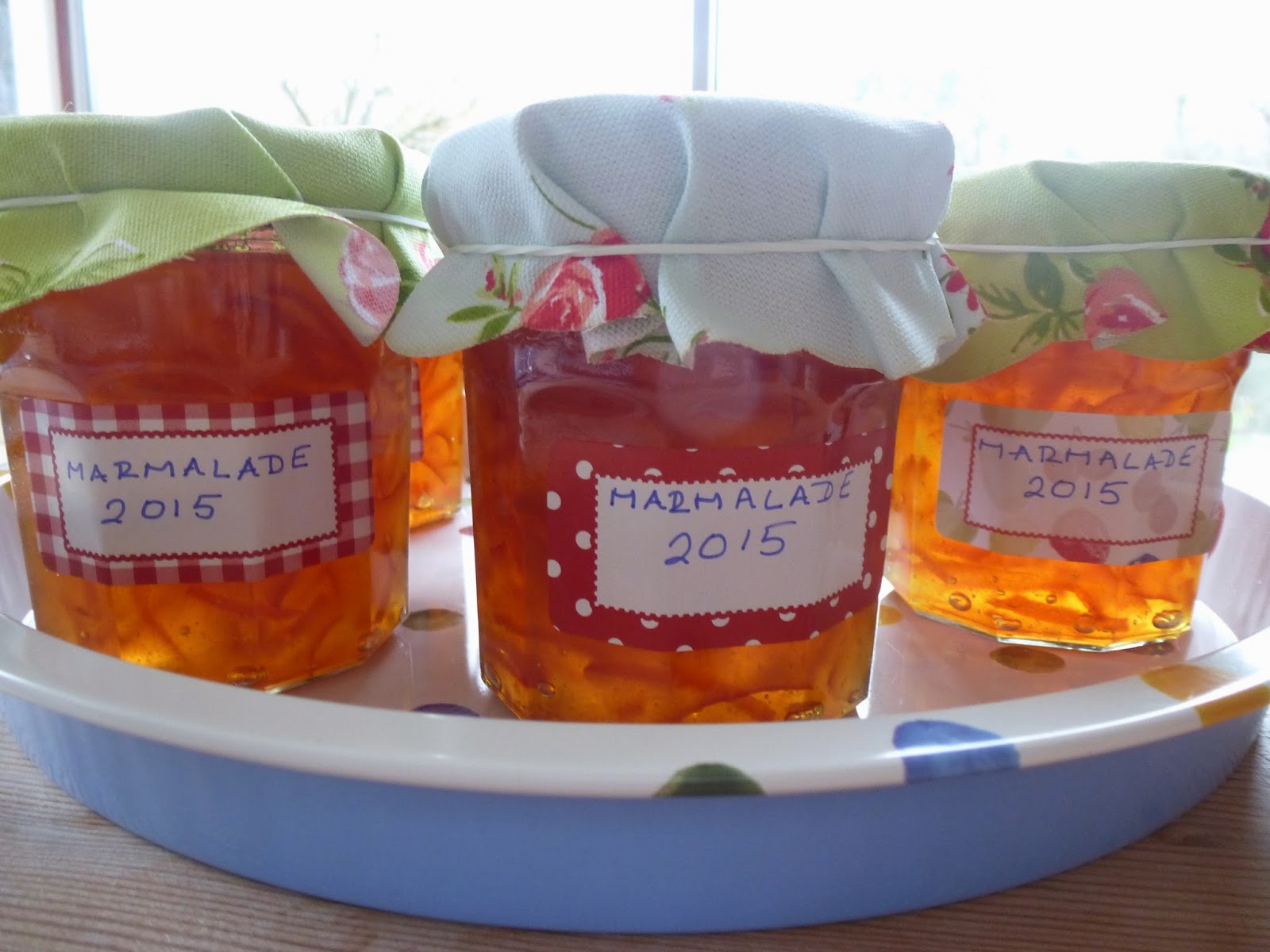 The chickens, after much hint dropping, bought me a skein of grey yarn for Christmas (yes, sadly, the animals do buy us gifts!). I'd seen a scarf that I loved on a blog a while ago but for the life of me I couldn't remember which one. So this is the result of my winging it: 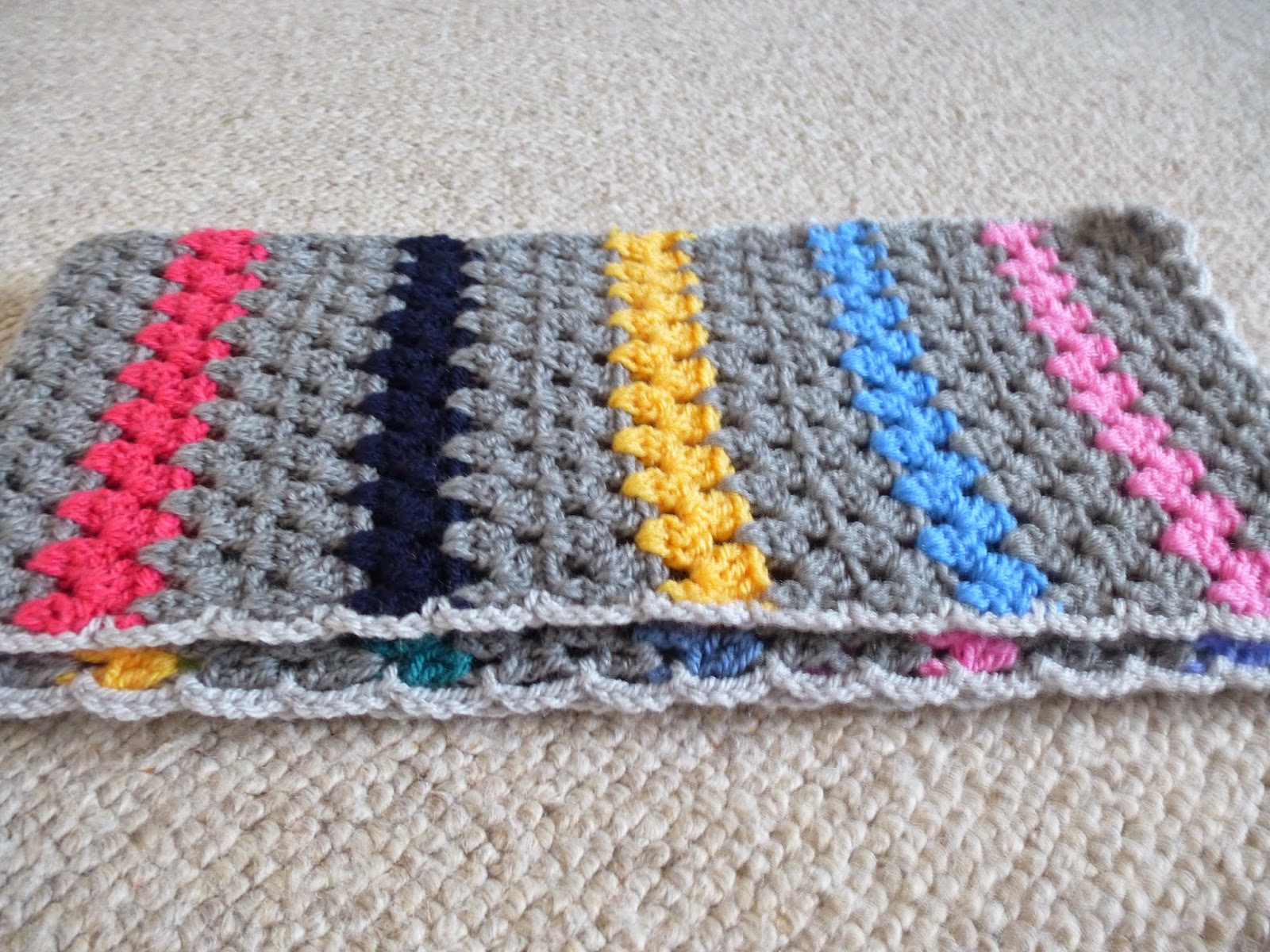 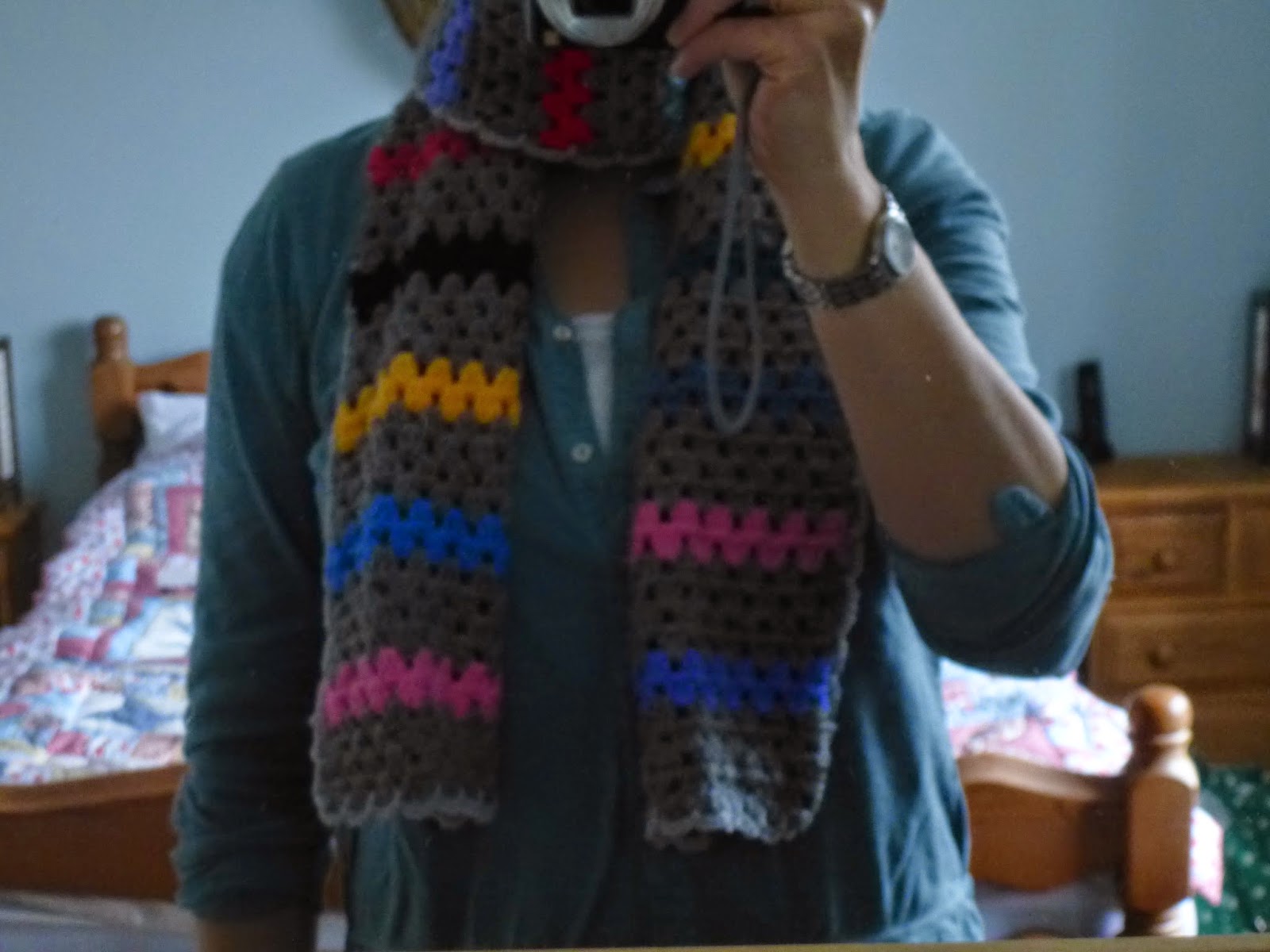 Of course, after I'd finished it Joules at Sew Sweet Violet posted pictures on her blog of her 2014 makes and, wouldn't you know it, there was the scarf! Joules' version can be seen here. Hers is so much neater, with a much snazzier edging and, if I'd done alternate rows, I could have used up more of that stash! Oh well.

Finally, the sun was spectacular on this morning's school run. These photos were taken in the school car park. E humoured her mother and, risking ridicule from her school friends, bravely jumped out of the car, camera in hand, and tried to capture the moment for me. Sadly, the photos don't do it justice. The colour was much more intense and the view better from the school drive, where you could see it through the trees throwing the silhouetted branches into sharp relief. It would have meant risking life and limb though, so I'm grateful for the ones she managed to get! 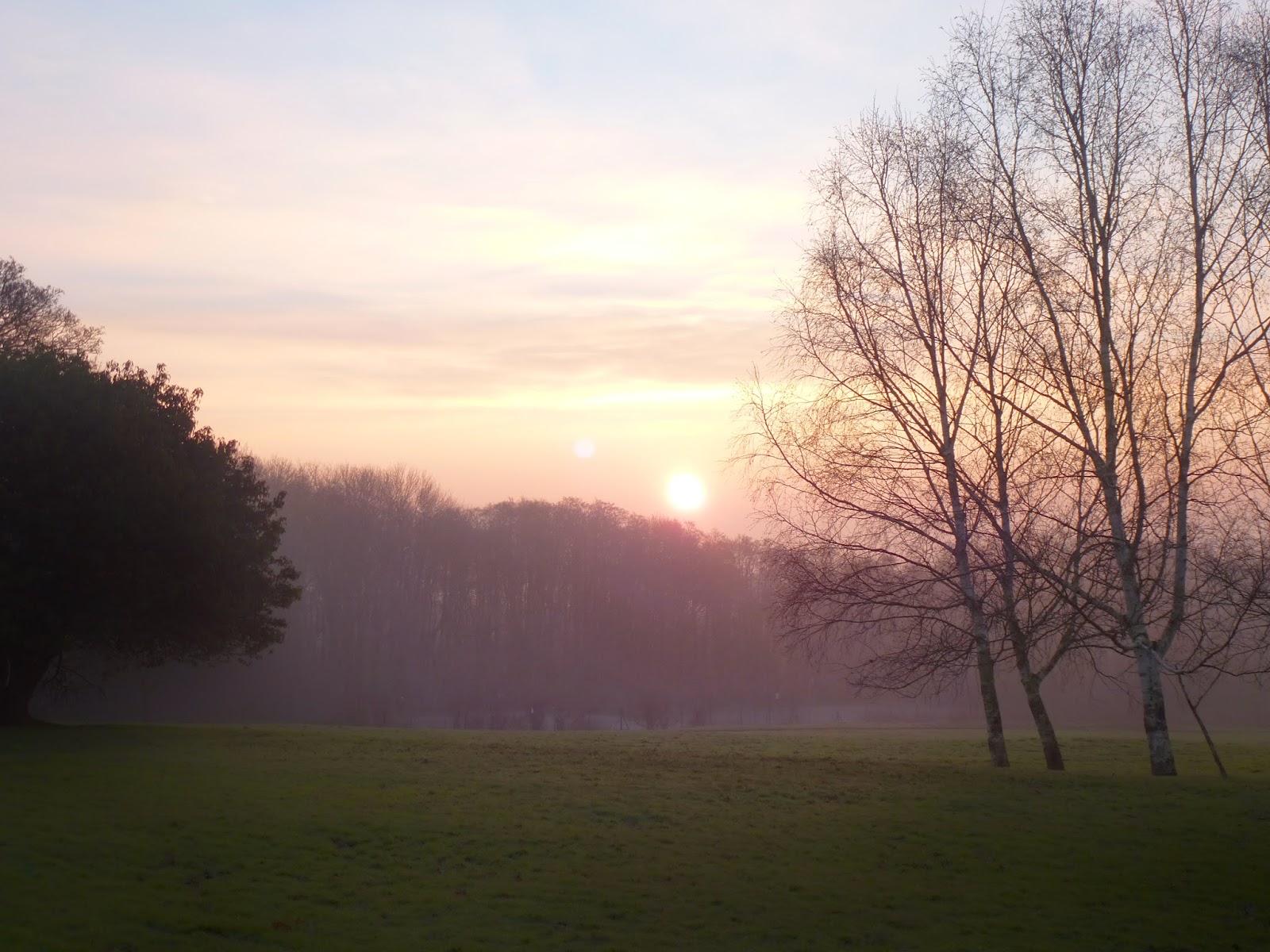 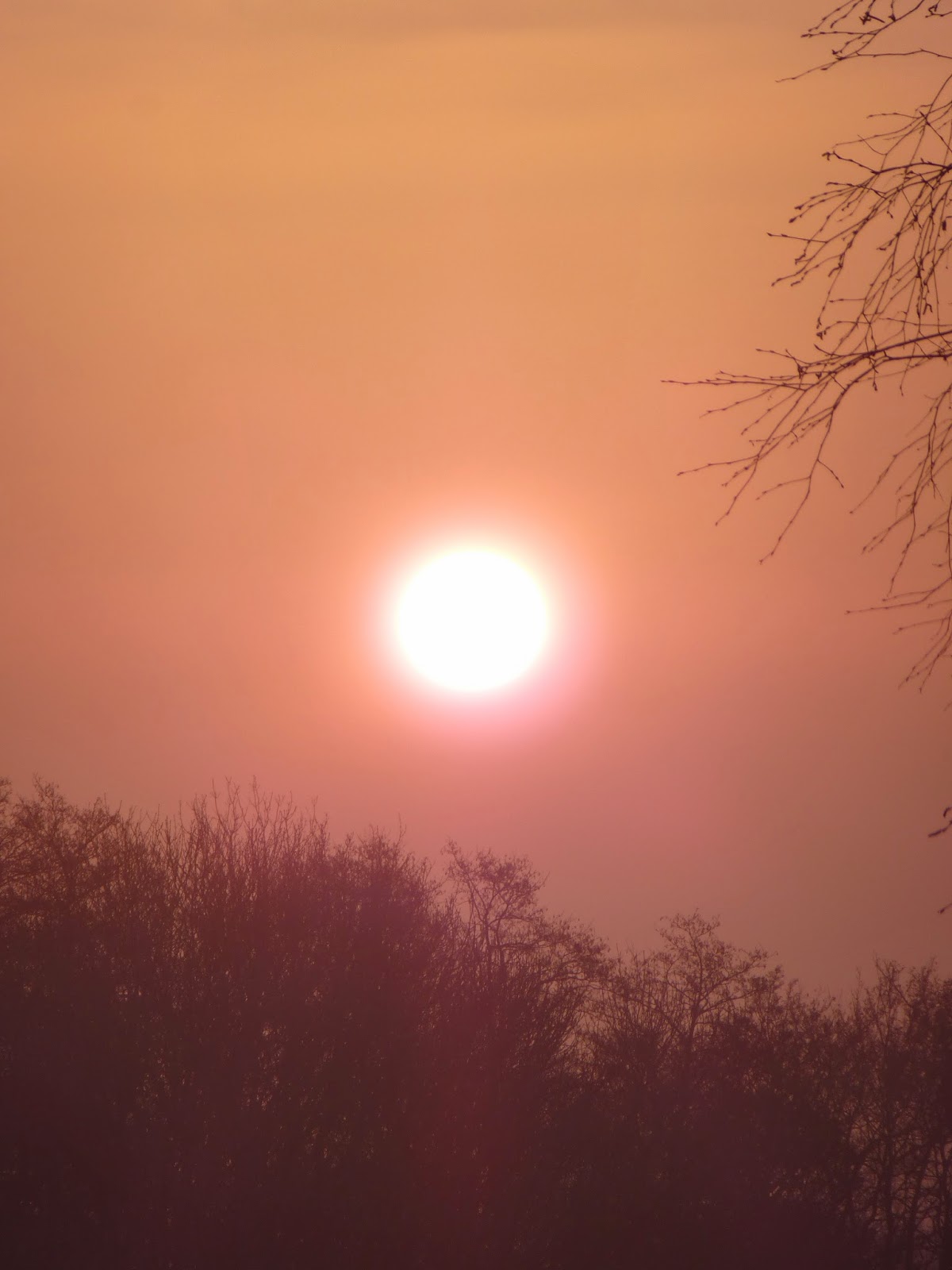 Anyway, that's all for the moment. Wishing you all a fun-filled and cosy weekend.
Toodle Pip for now. x
Posted by VeggieMummy at 13:10