Happy December 1st! Apologies in advance as this has turned out to be a rather photo-heavy post. I actually got around to doing a 'new thing' this week; albeit a really easy, little one! With a view to making my own Christmas wreath this year, I have been collecting a few bits and bobs to put on it. Pine cones, I collected from Swinley forest when E and I went there in the Summer. Cinnamon bark we bought a big bag of on a trip to Istanbul last year. Foliage I can collect from the garden .... which left dried orange rings. I have seen small bags of them recently, but at £3 for a few slices they seemed a bit expensive, so I decided to make some instead. They are really easy and you can save on gas/electricity by popping them in the oven with other things - meringues would be good as the temperature should be quite low. 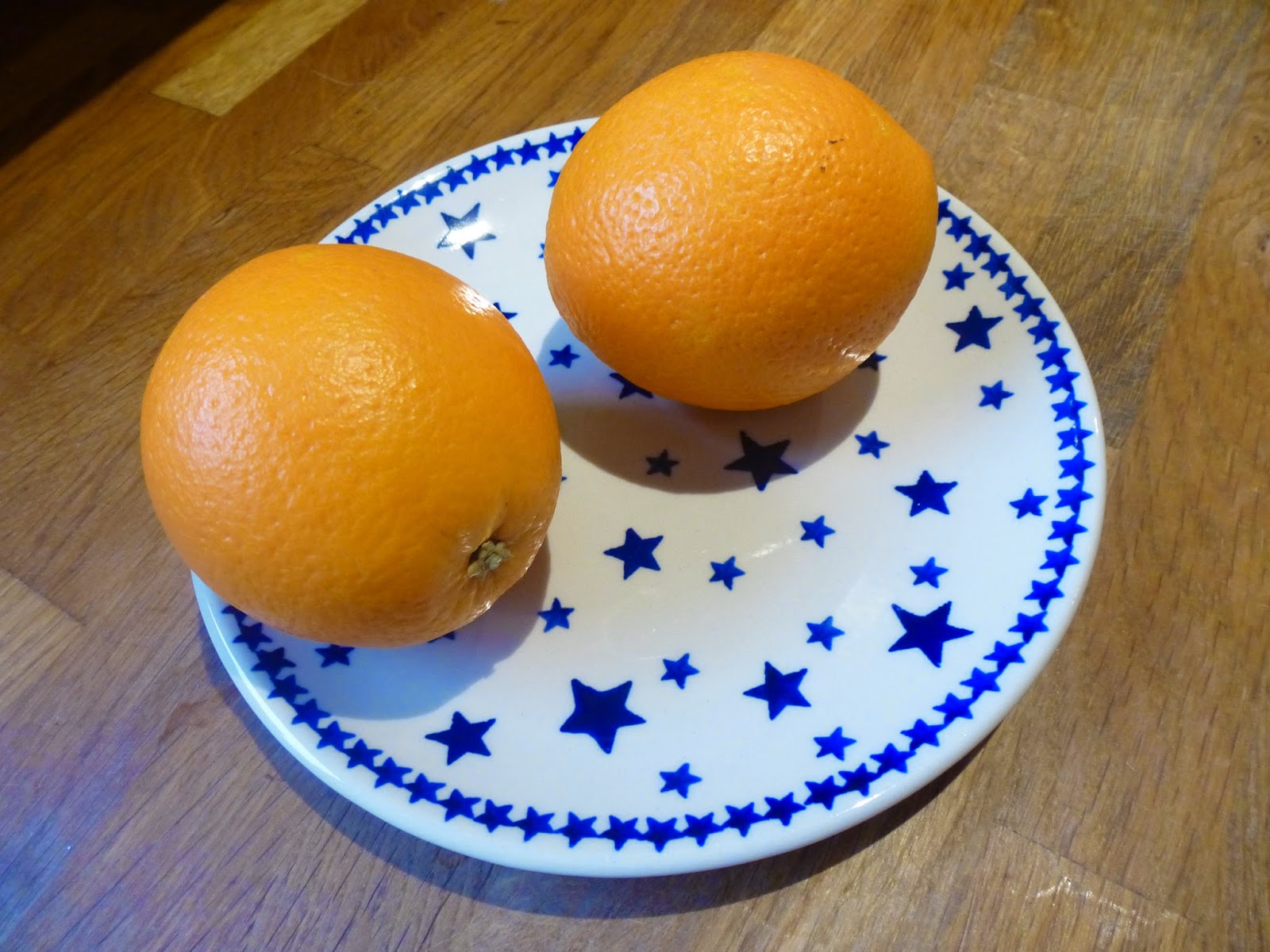 Slice thinly with a sharp knife - the fork is optional! 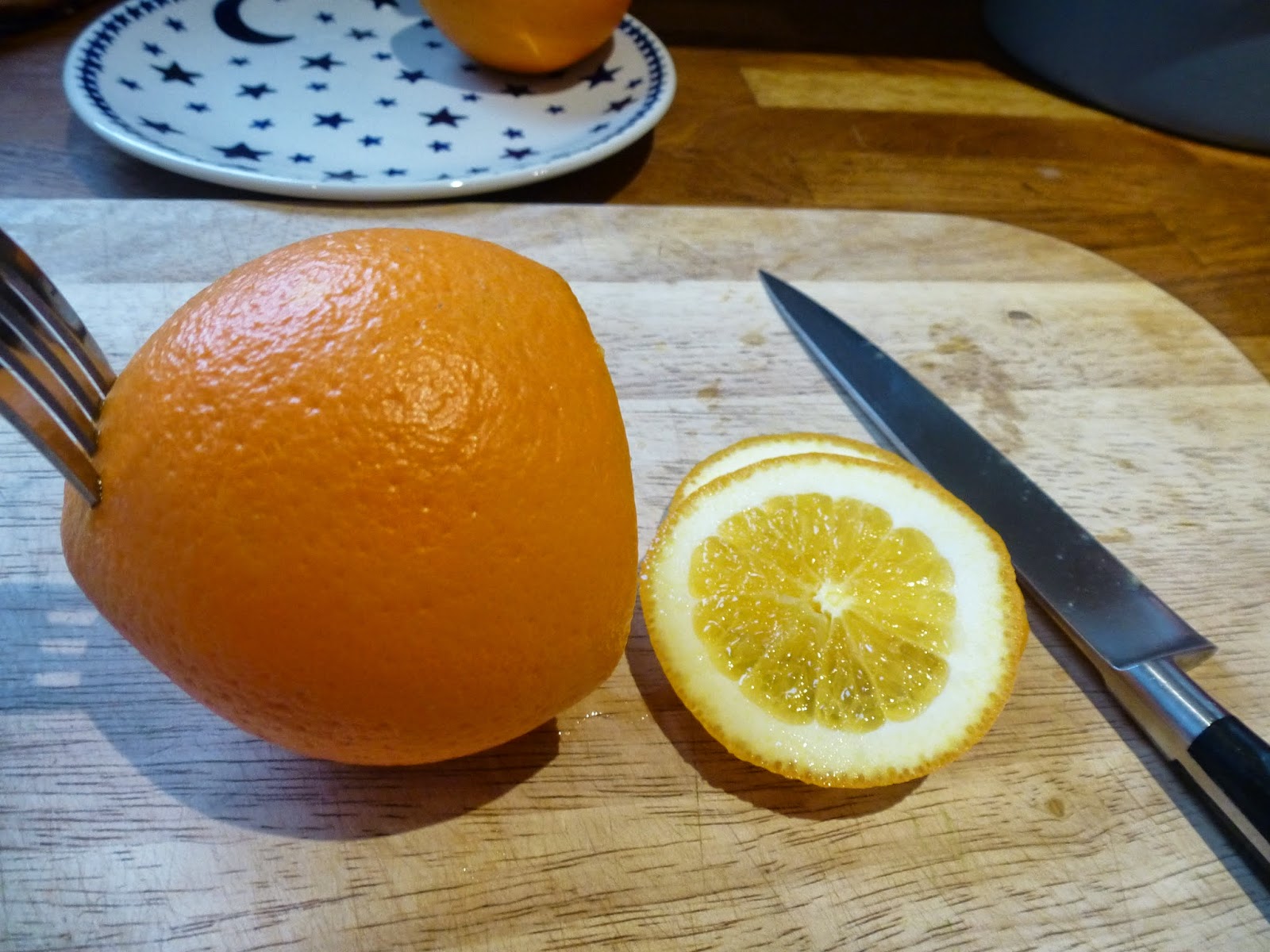 Dry both sides with kitchen paper to mop up the juices and arrange on a rack. 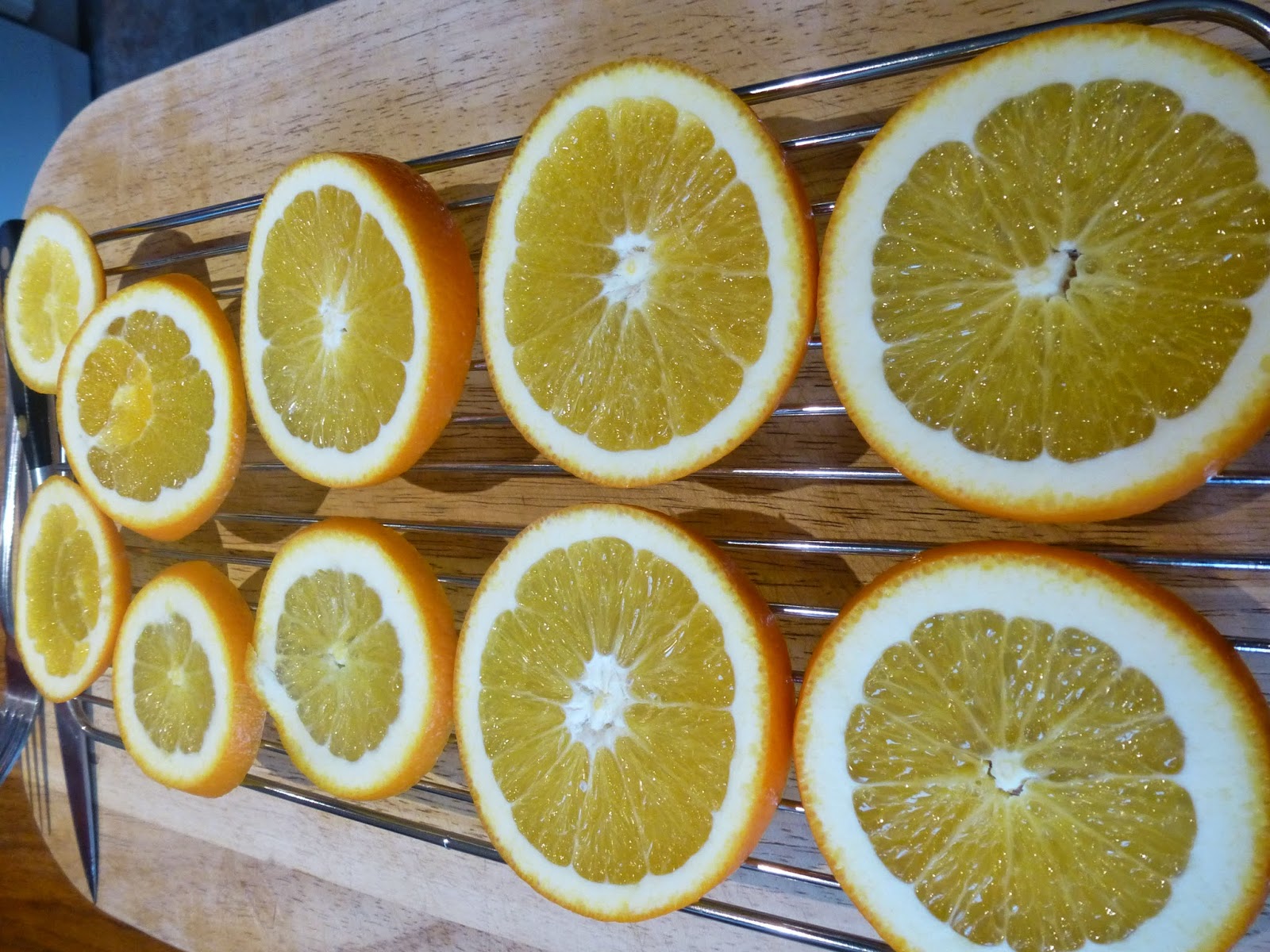 Pop in the oven and bake on the lowest setting for a couple of hours, turning frequently to prevent sticking and .....
Ta-Dah! 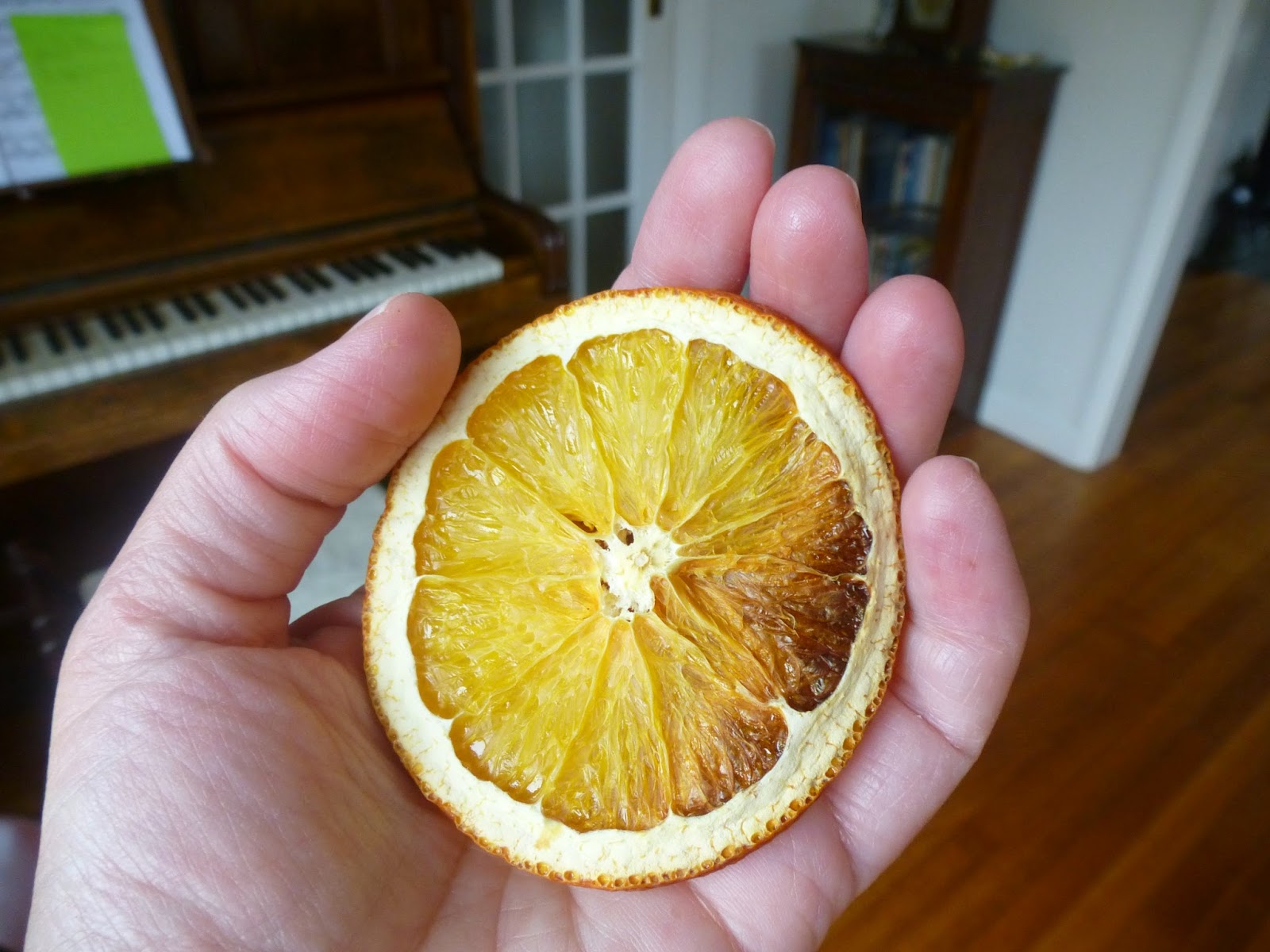 Dried orange rings, all ready for the wreath when I get around to it.

We had quite a busy weekend for us. Friday was Guest Night at L's college, so it was off to Oxford again for formal dinner in the Hall. The food was scrummy - L wasn't keen on the mushroom pate starter (too much 'shroomy grossness'!) but the rest of us enjoyed it.

I really liked the place mats: 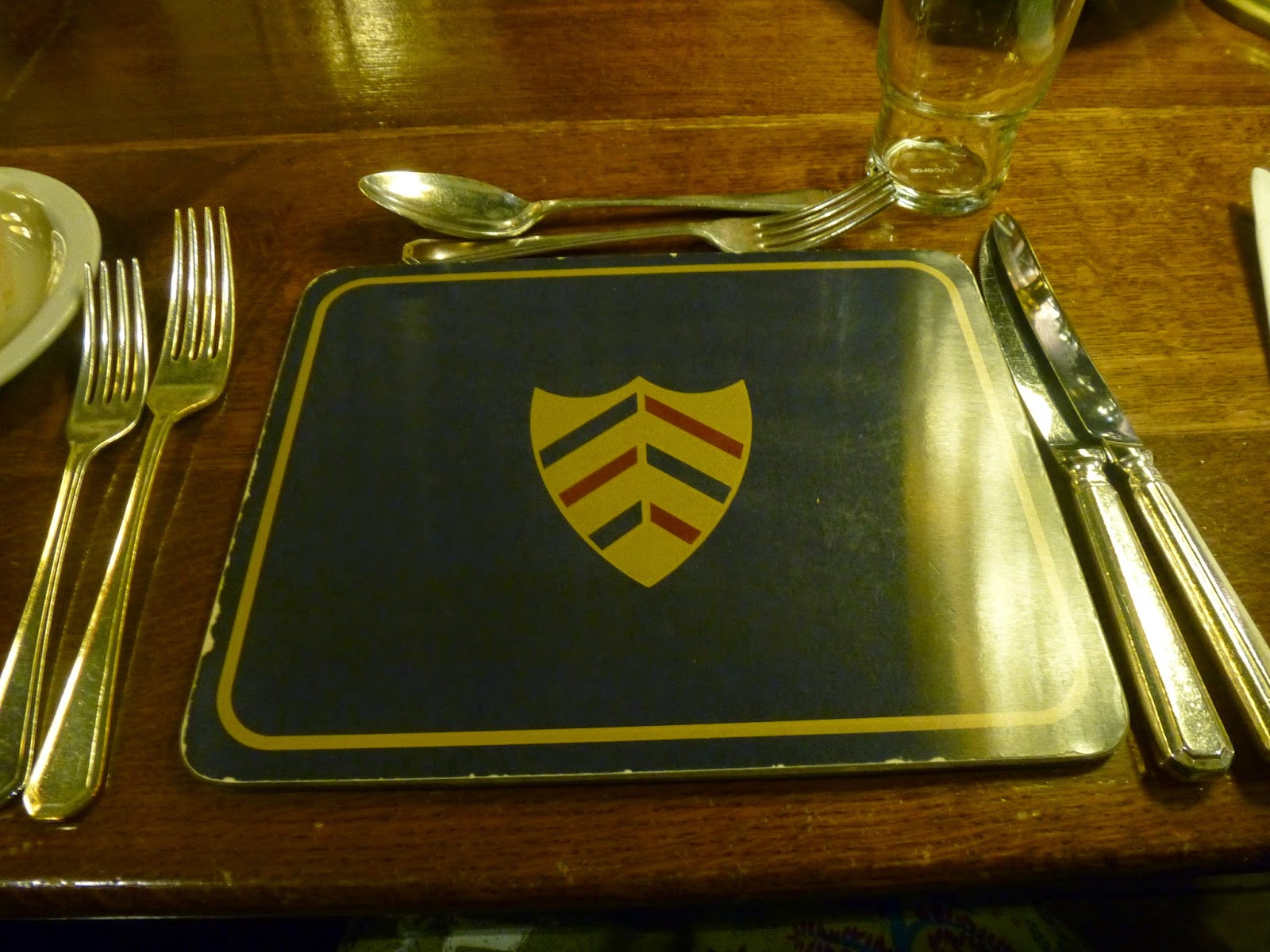 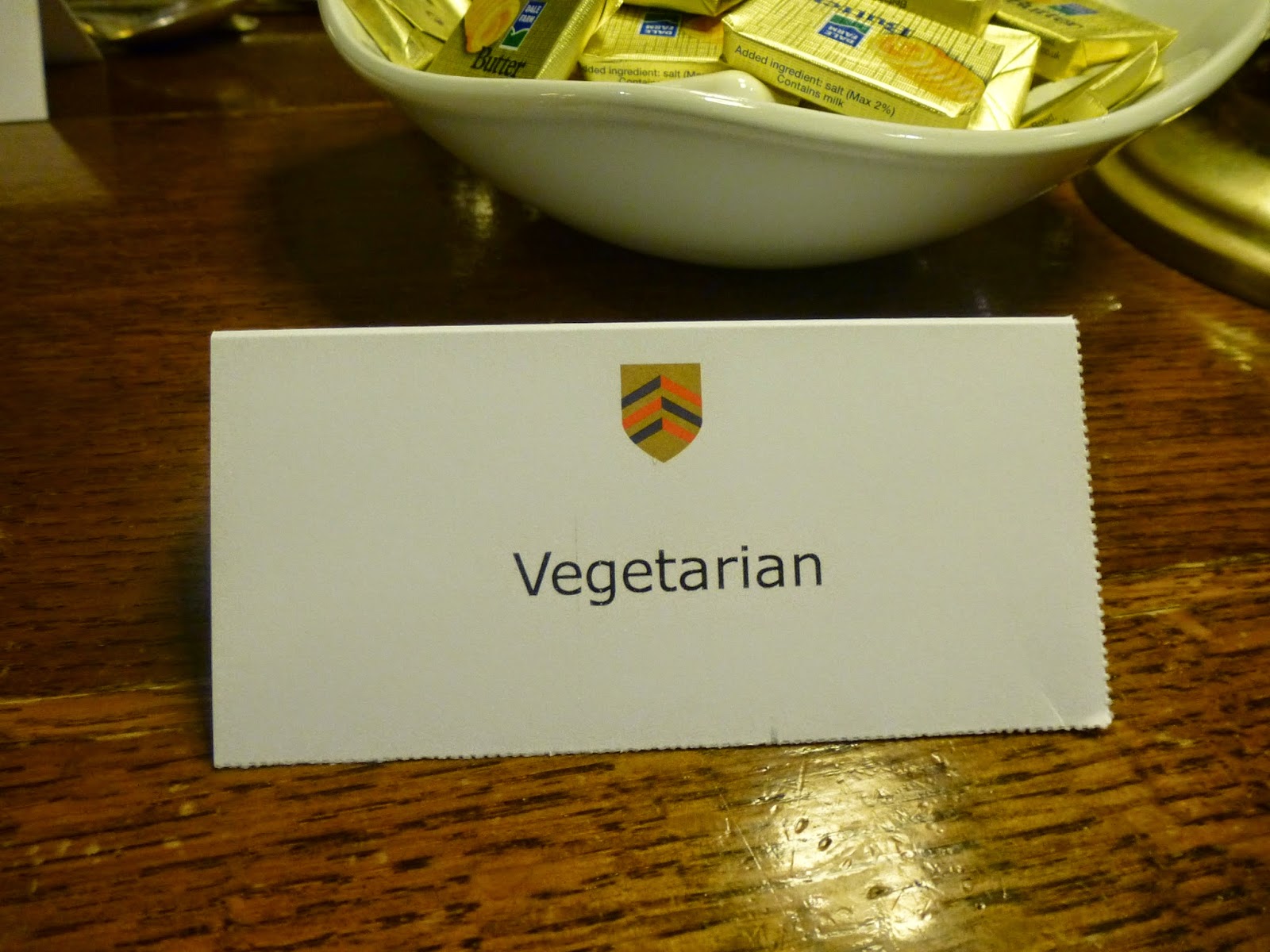 ....and the Christmas tree in one of the quads: 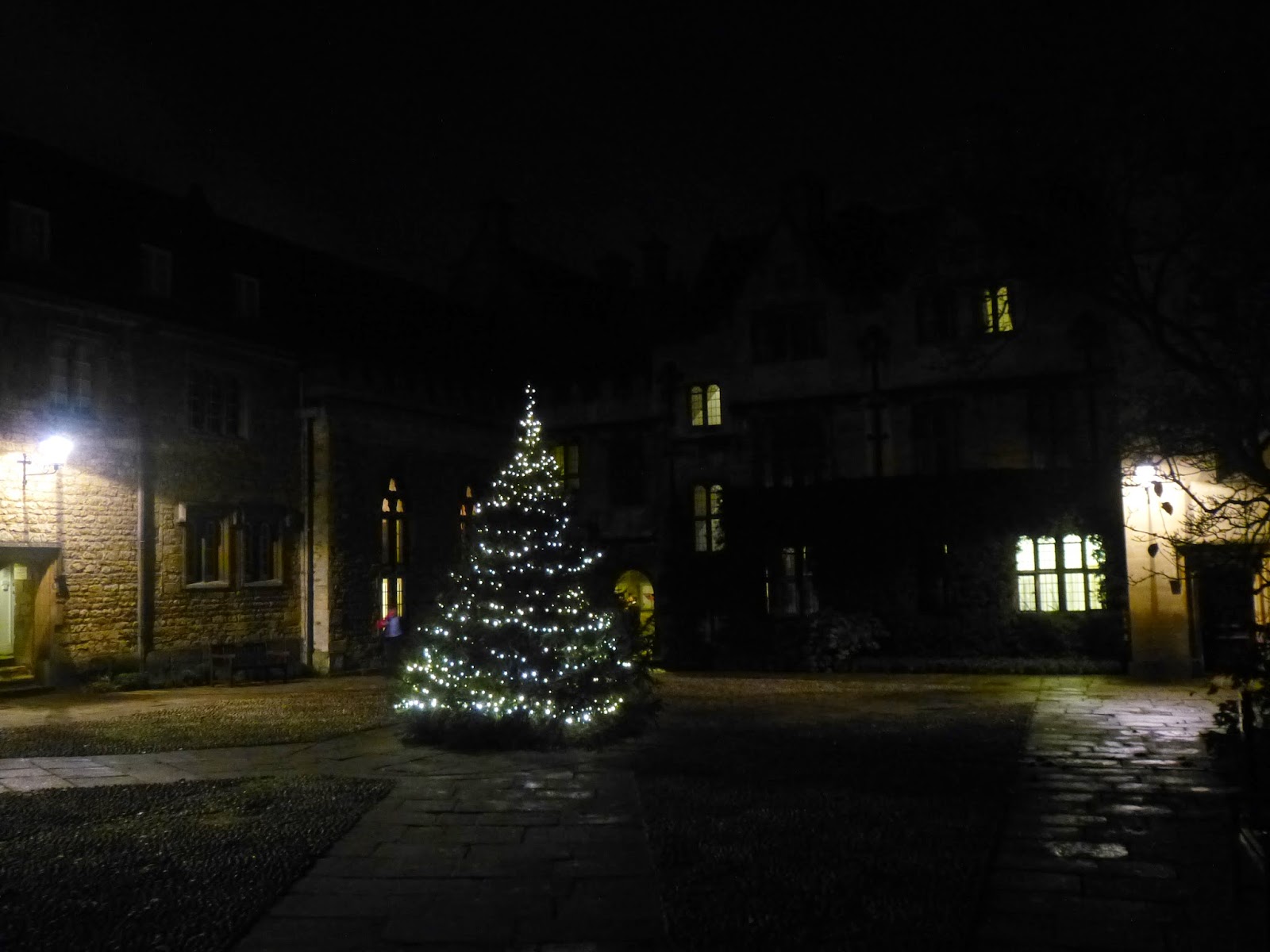 We sneaked into the JCR after dinner for a family game of table tennis. The bats had seen better days but we were so appallingly bad that it didn't really matter! 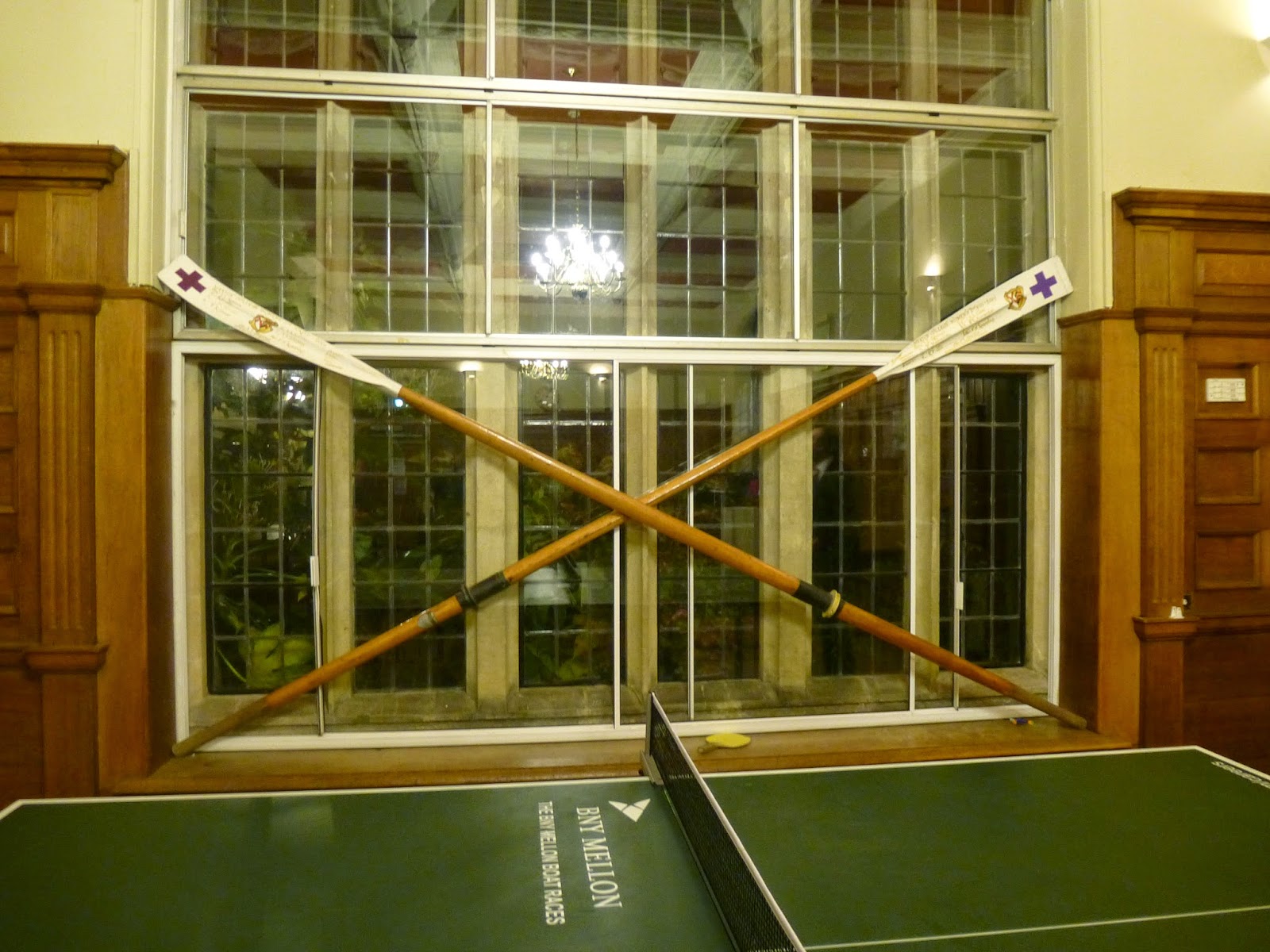 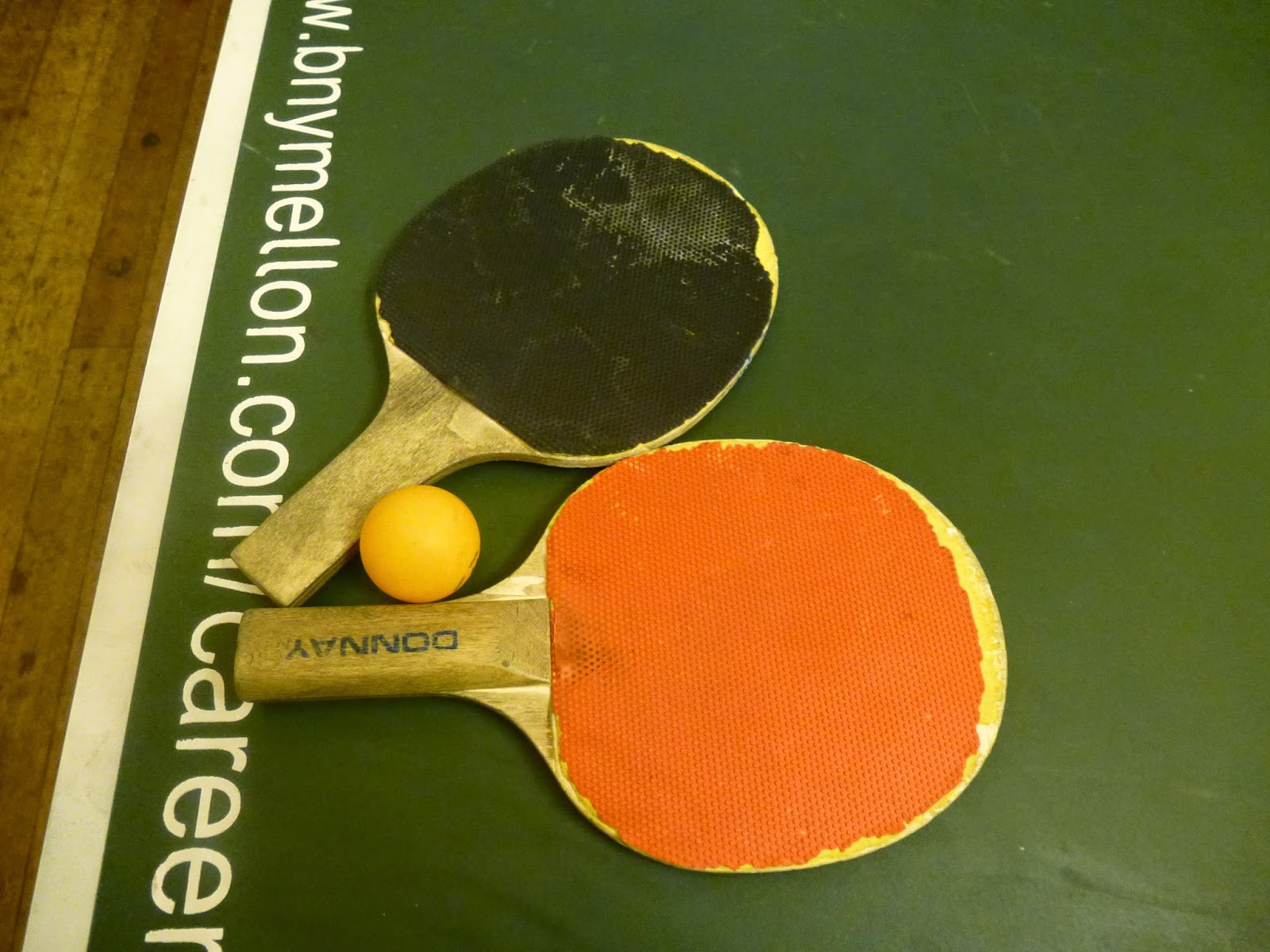 I was off to Bath on Saturday to meet a friend and have a potter round the Christmas market. Getting up early I found 4 deer in the garden (we've never had 4 at once before - does that qualify as a herd?!). They were very beautiful but rather quick. That and the low light levels made for some very blurry photos.


Can you spot the one under the apple tree? 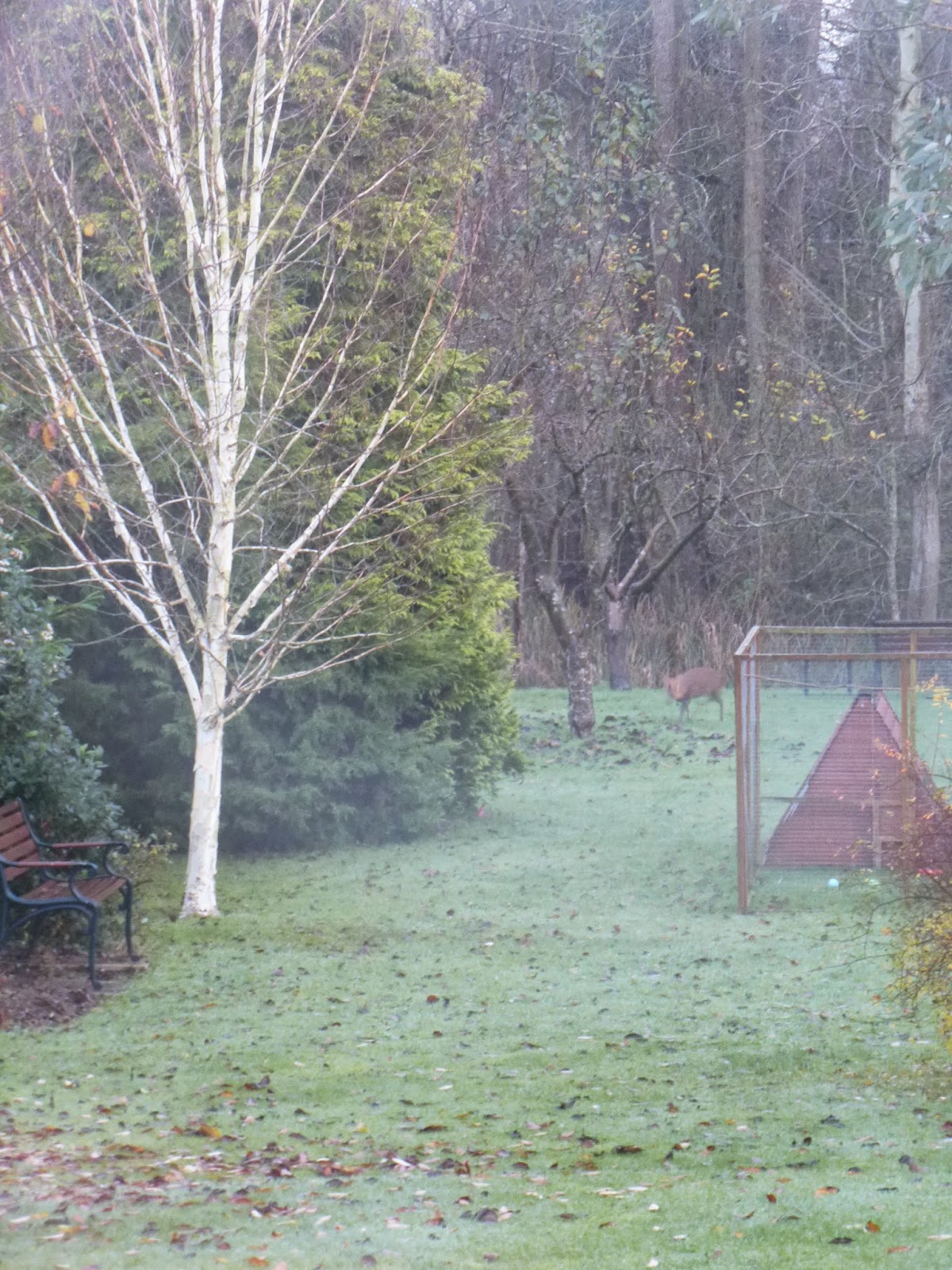 2 more with jaws moving as they munched on the shrubs! 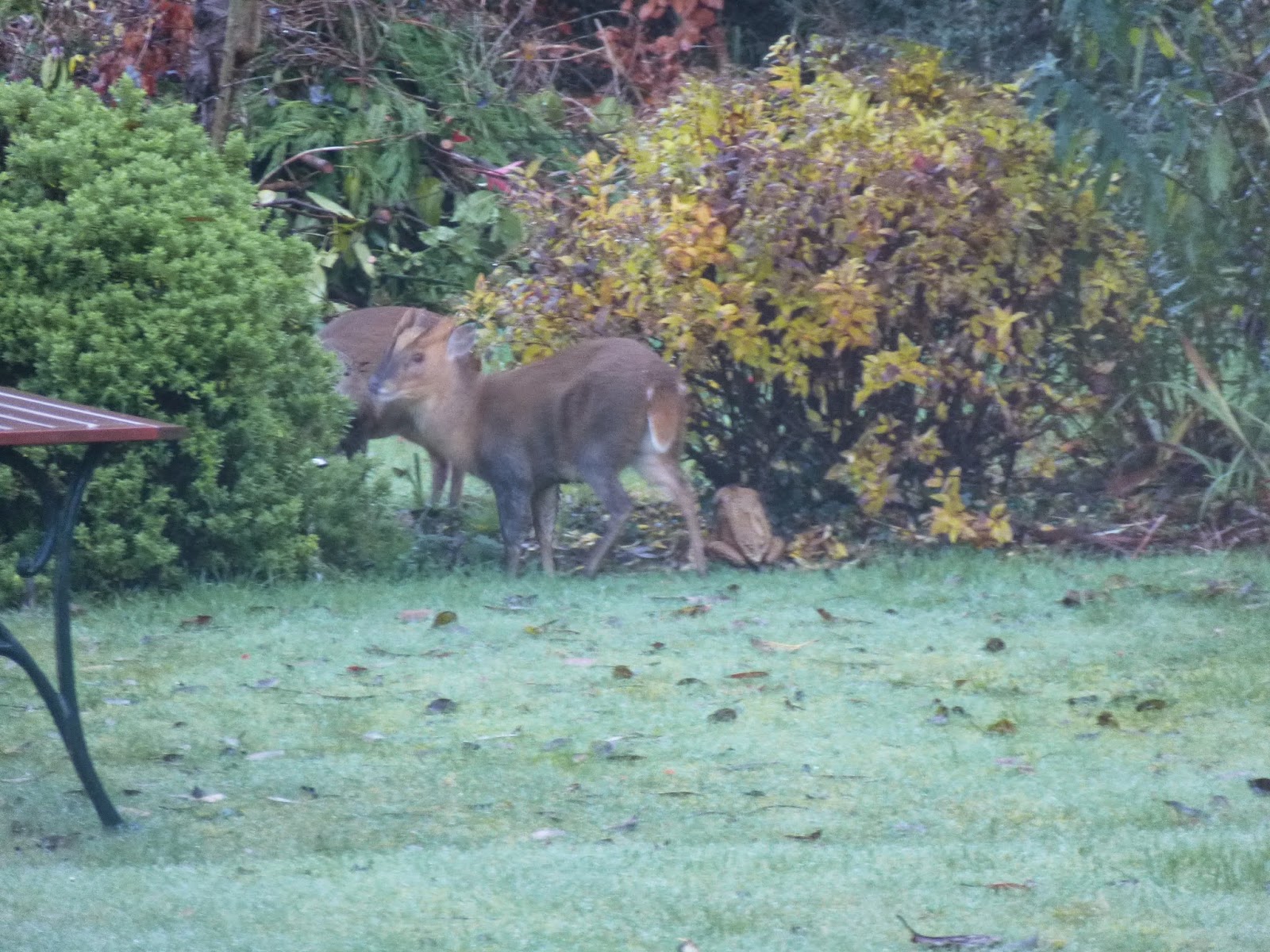 I arrived in Bath at about 10:30 to find that the rest of the country had had the same idea about visiting the market. These photos don't look too bad but it was alternate breathing only round the market stalls and the queue to and from the Park and Ride was HUGE. 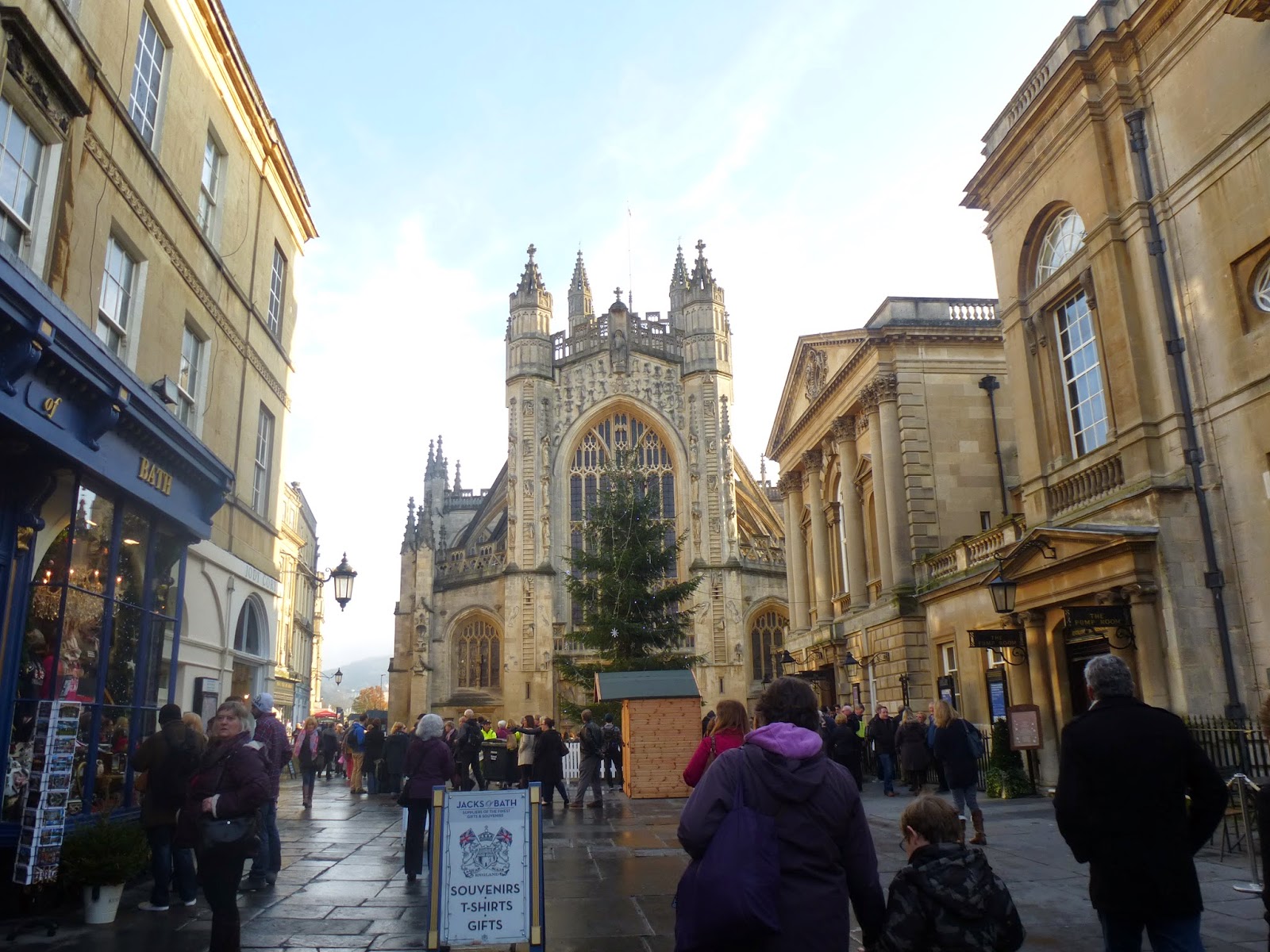 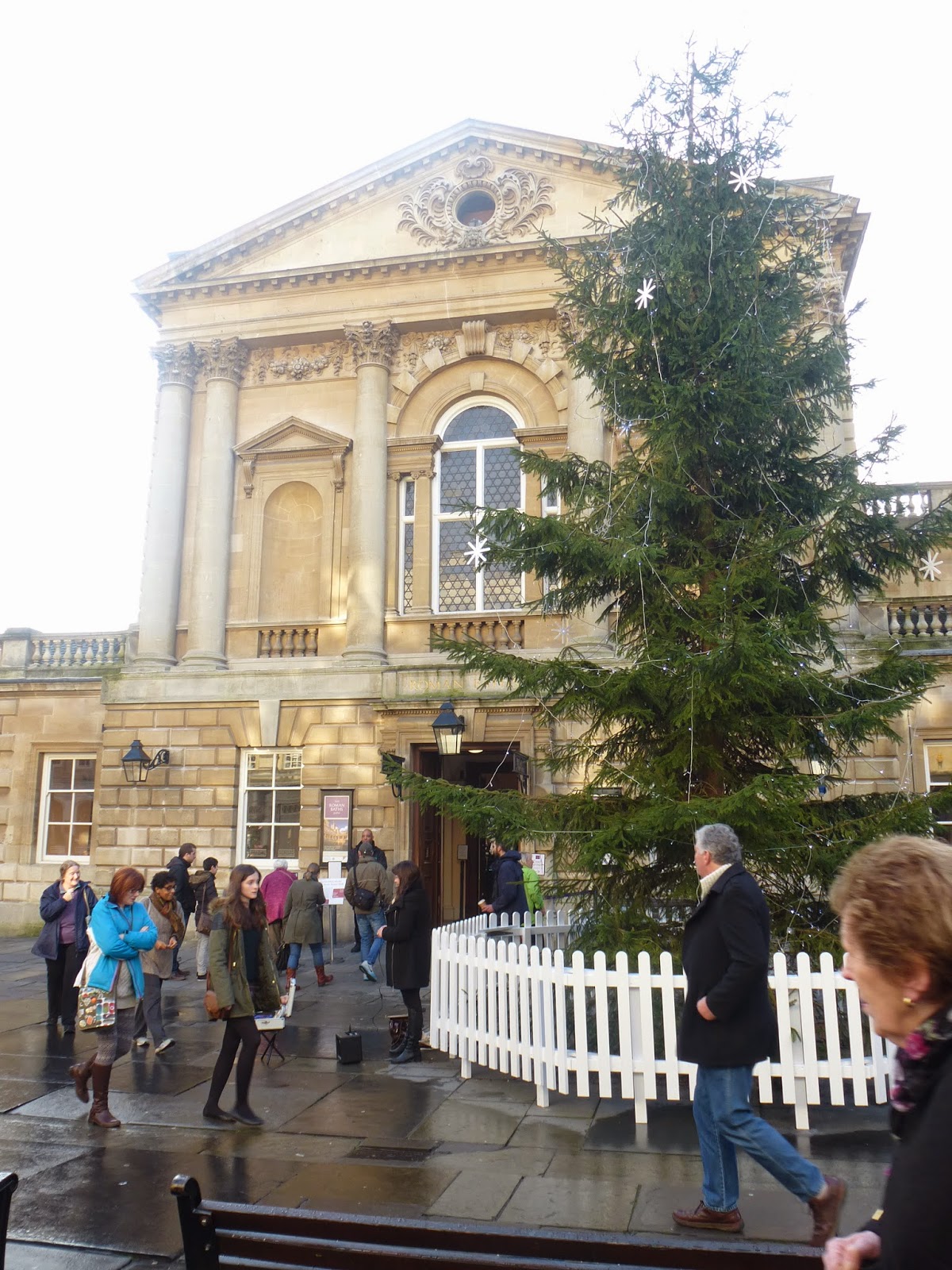 Waiting for my friend to arrive, I treated myself to a decaff latte and a Bath Bun - delish! 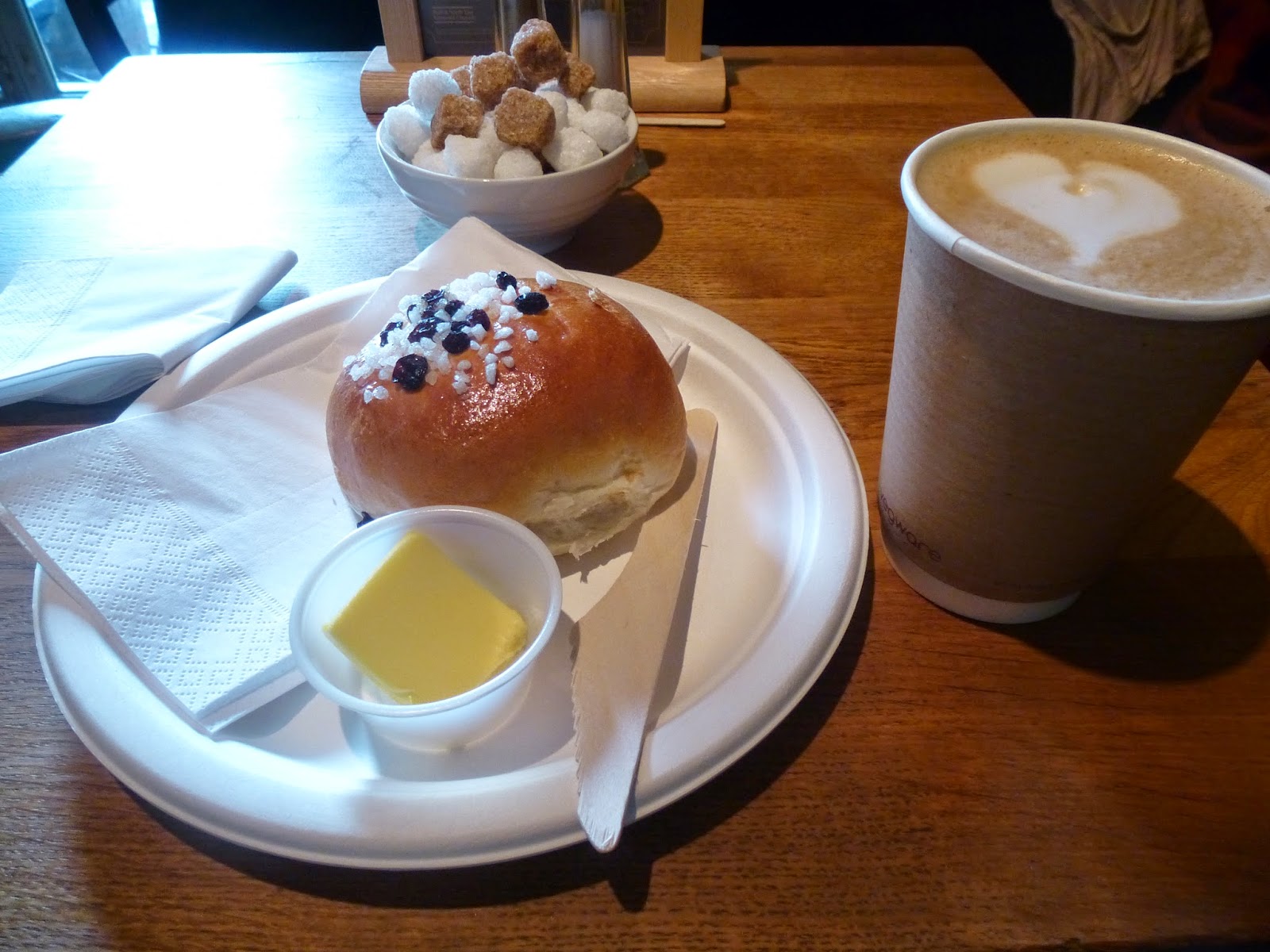 Before setting off for Bath, I had noticed a wee beastie in the garage. I arrived home to find that R had caught it in the humane trap and E had named it 'O'Connelly' and wanted to keep it! 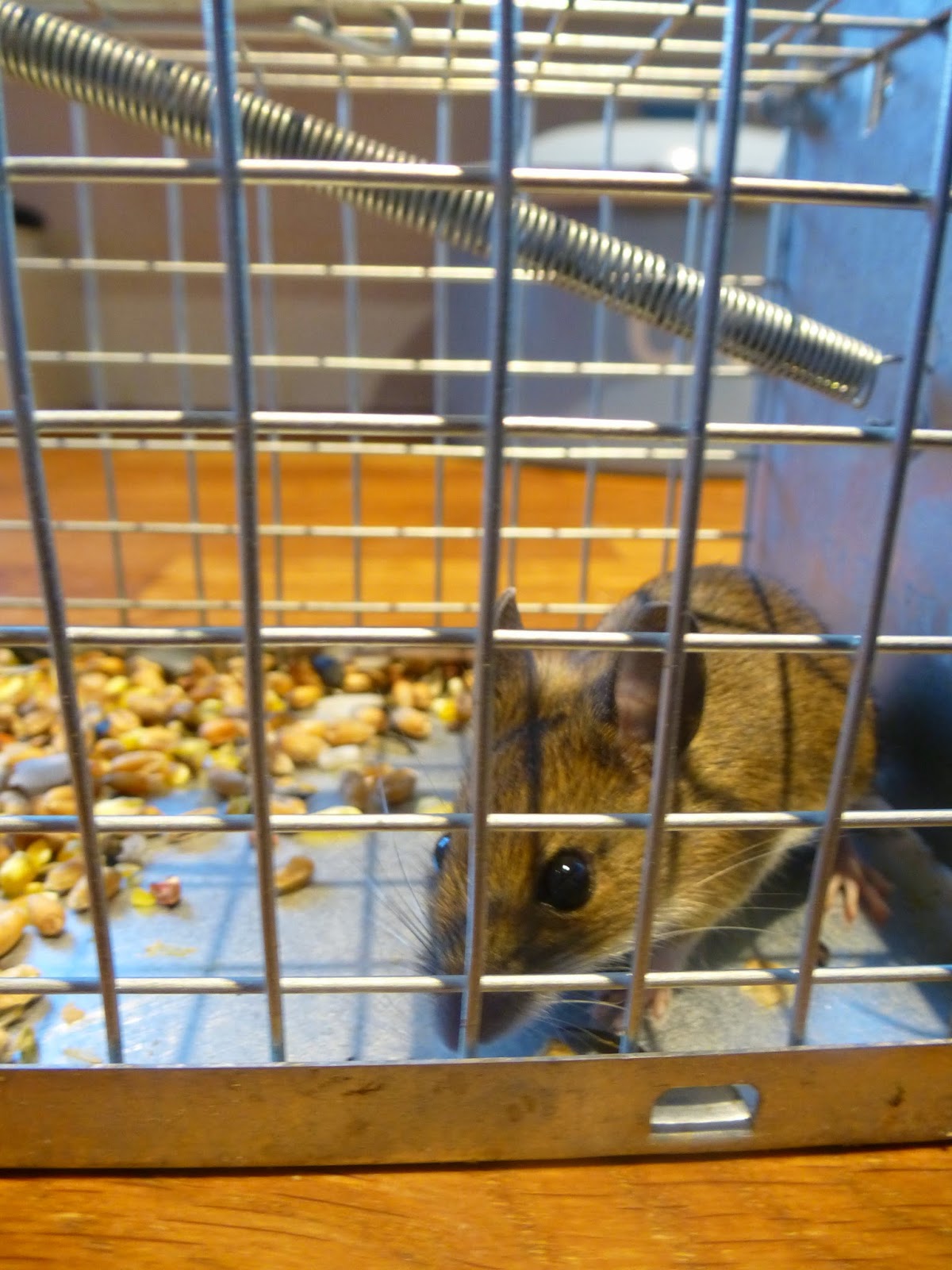 I'm afraid I put my foot down over that one (not literally!). O'Connelly stayed as a house guest overnight and then was liberated by the river - not our stretch in case he turned out to be a homing mouse. We are now rodent free once more.
Sunday saw us going to pick up some more chickens from the British Hen Welfare Trust. They are no longer termed 'battery hens' as they are kept in bigger cages ....... but in larger numbers. Looking at our 4 new girls, however, with their pallid, flaccid combs and wattles and bald bodies (those aren't white feathers, they are bald bits) it still can't be acceptable. After a year of such conditions, they are either rescued by the BHWT to be rehomed or slaughtered. 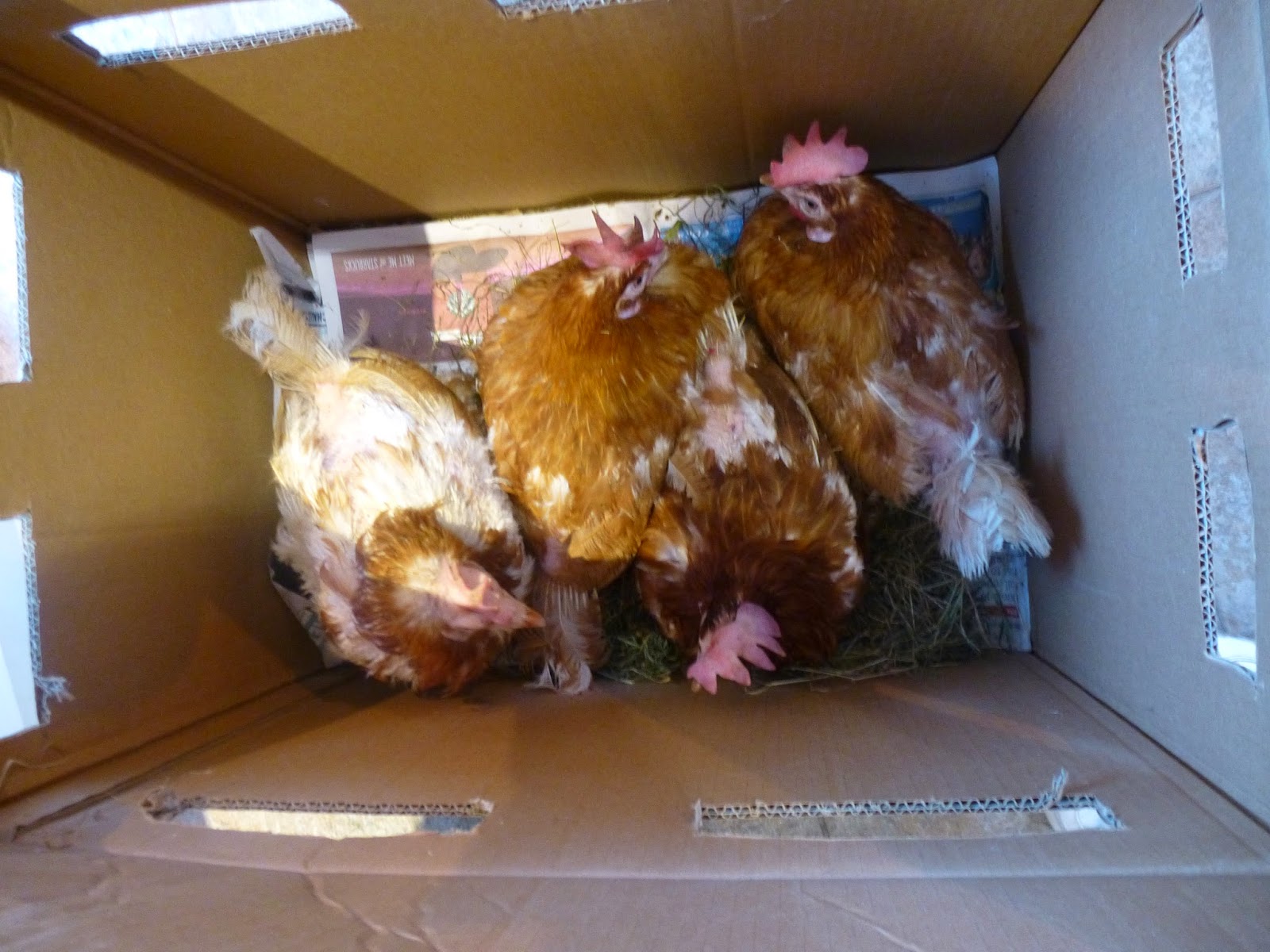 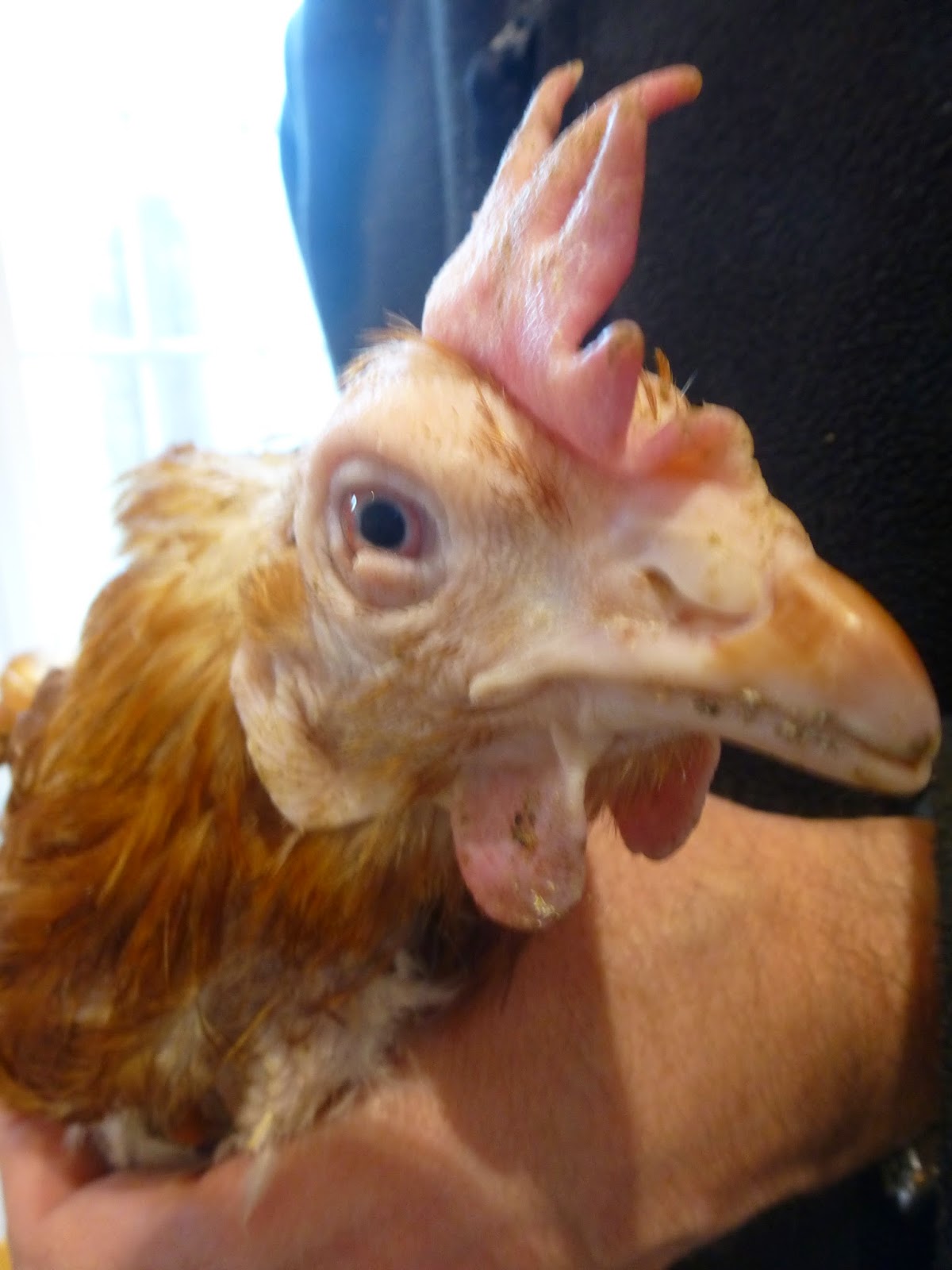 I thought I'd spend Sunday evening doing a bit of crochet in front of the stove: 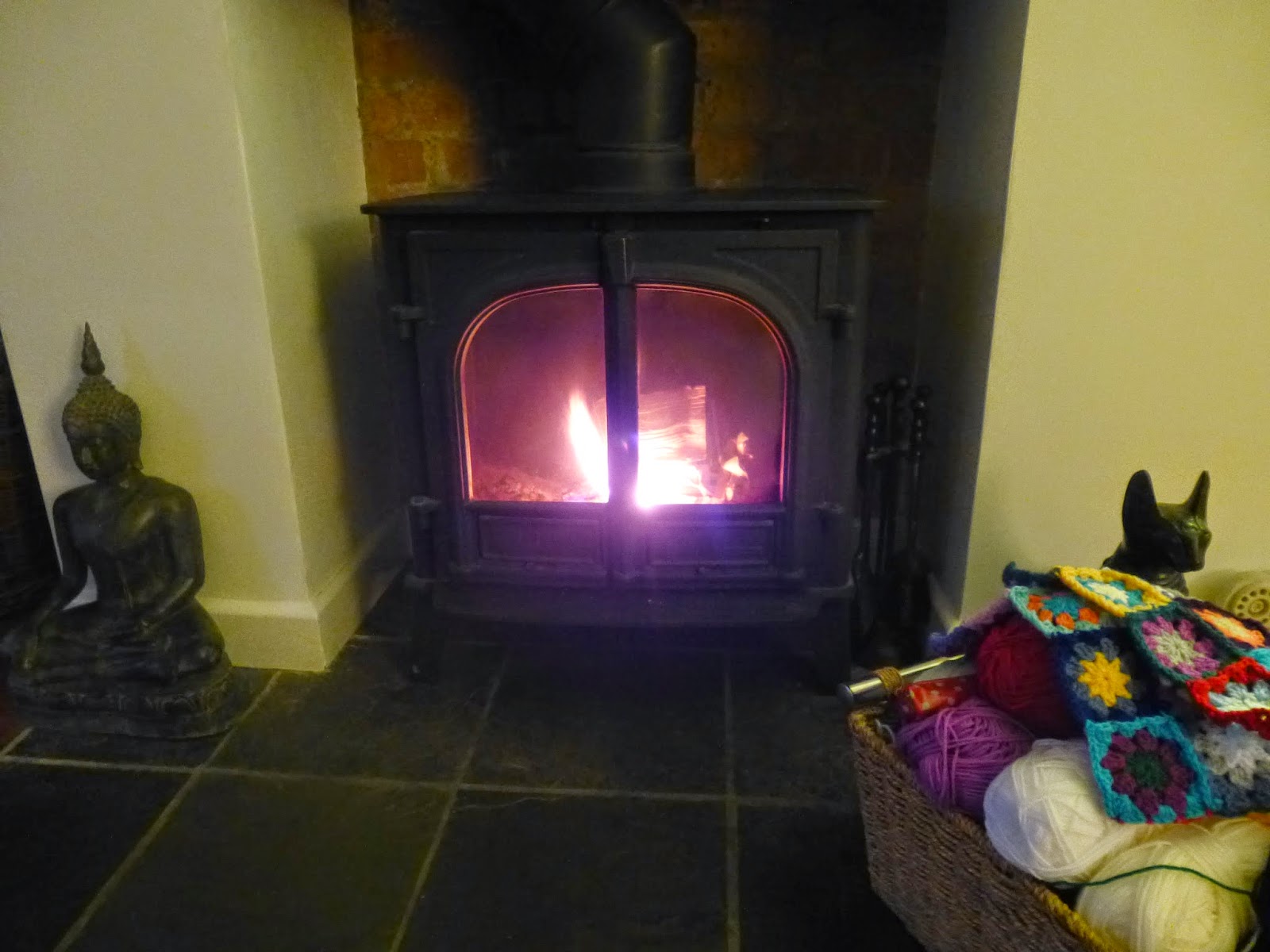 E's rabbit, Hamish, had other ideas. He decided that I was in the perfect position for him to rest his chin and have a bit of an ear rub. 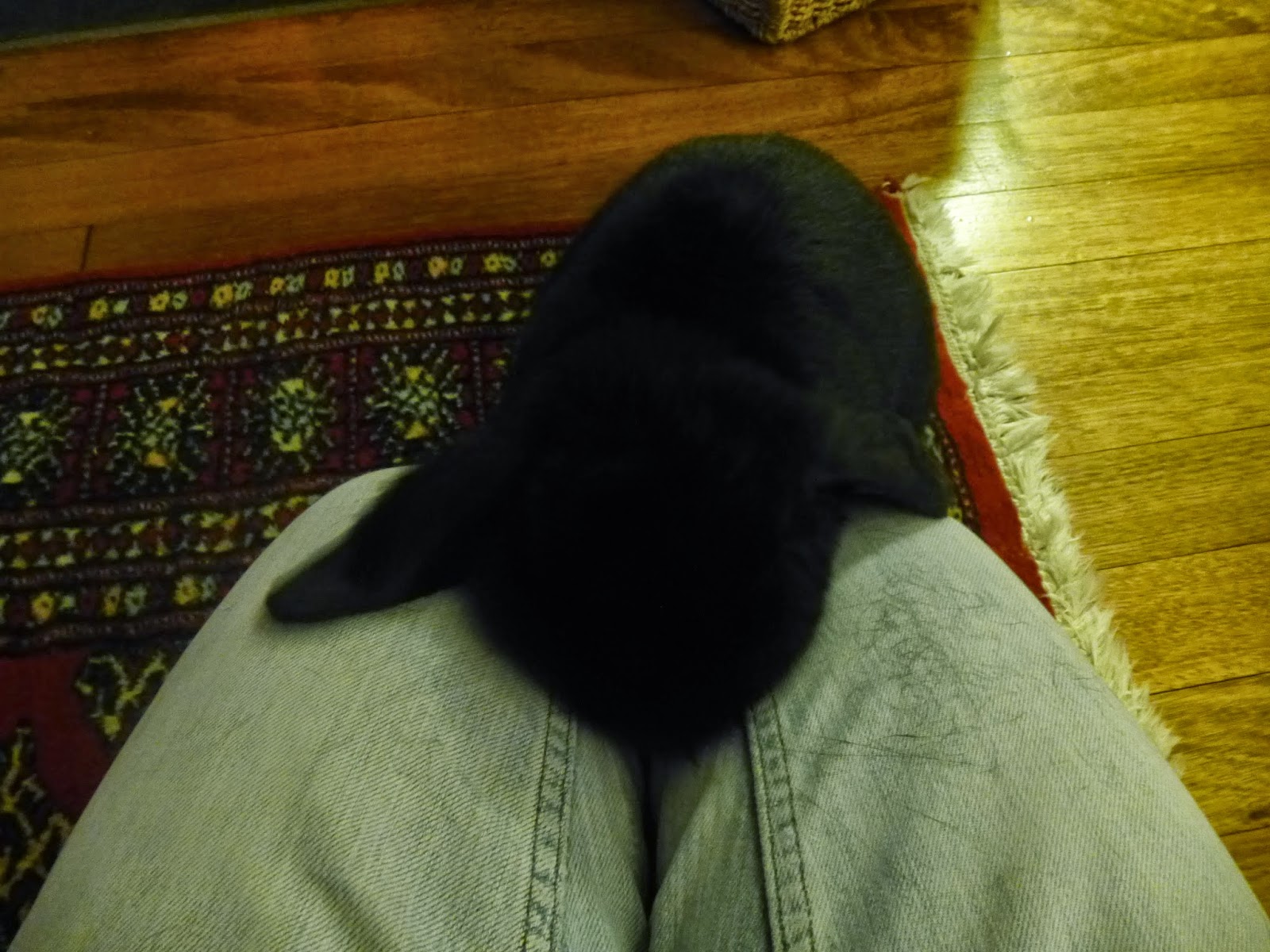 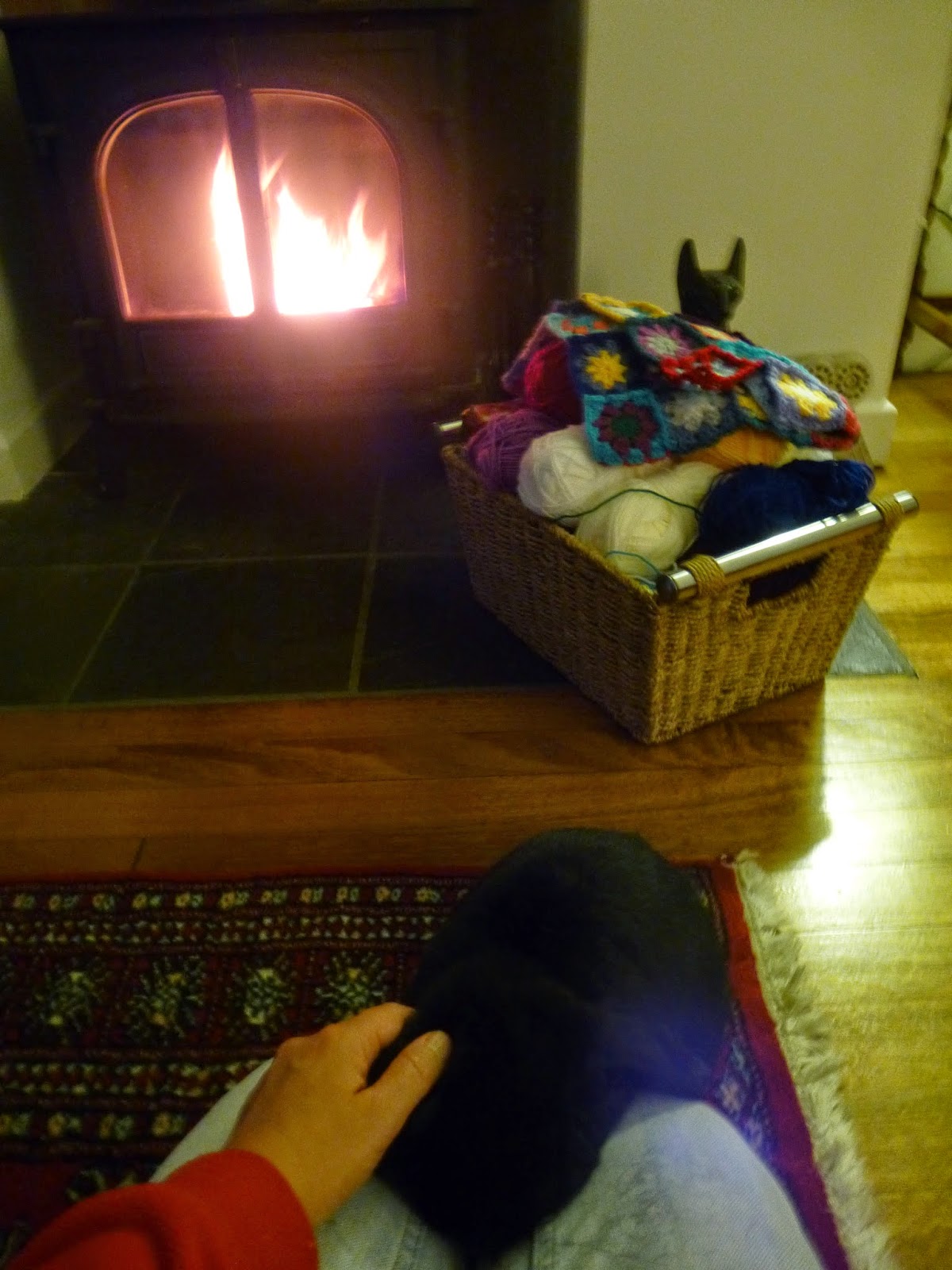 So much for the crochet! 3 final happies this week:

A pot of hyacinths and the advent candle which I bought at Bath Abbey: 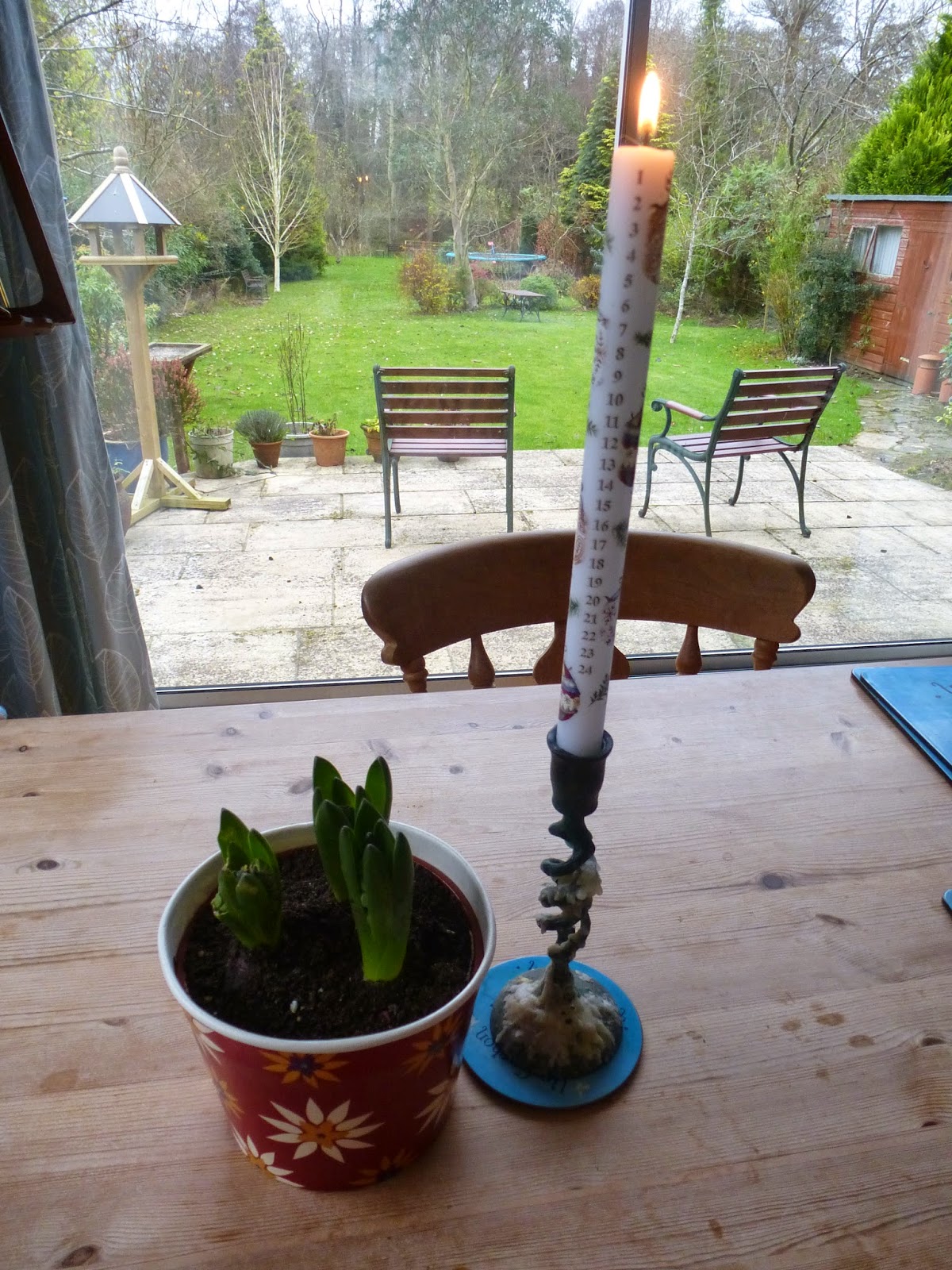 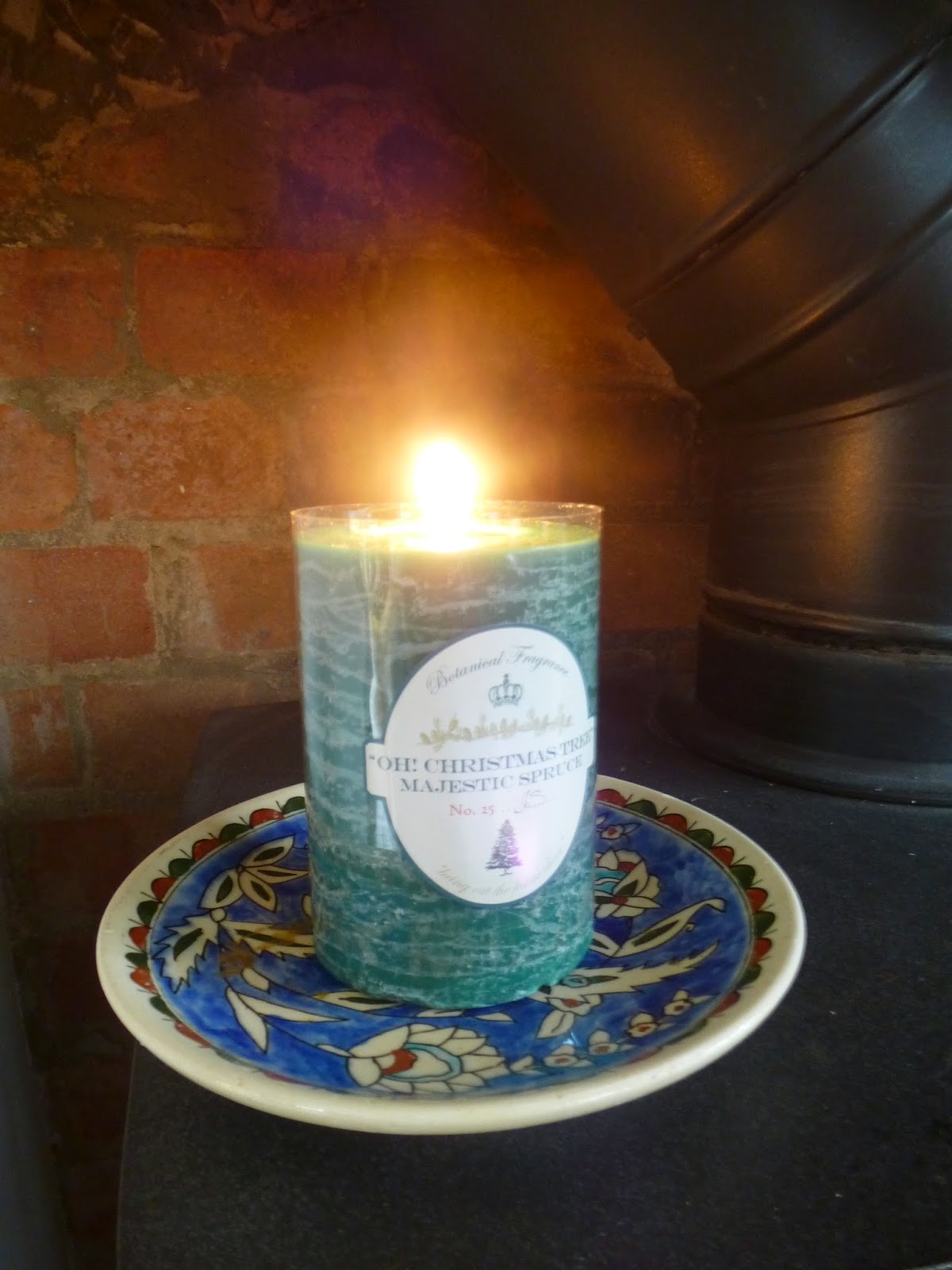 ........ and these. I discovered them at the supermarket and they are really lovely. A bit like the mini Easter eggs but more festive! 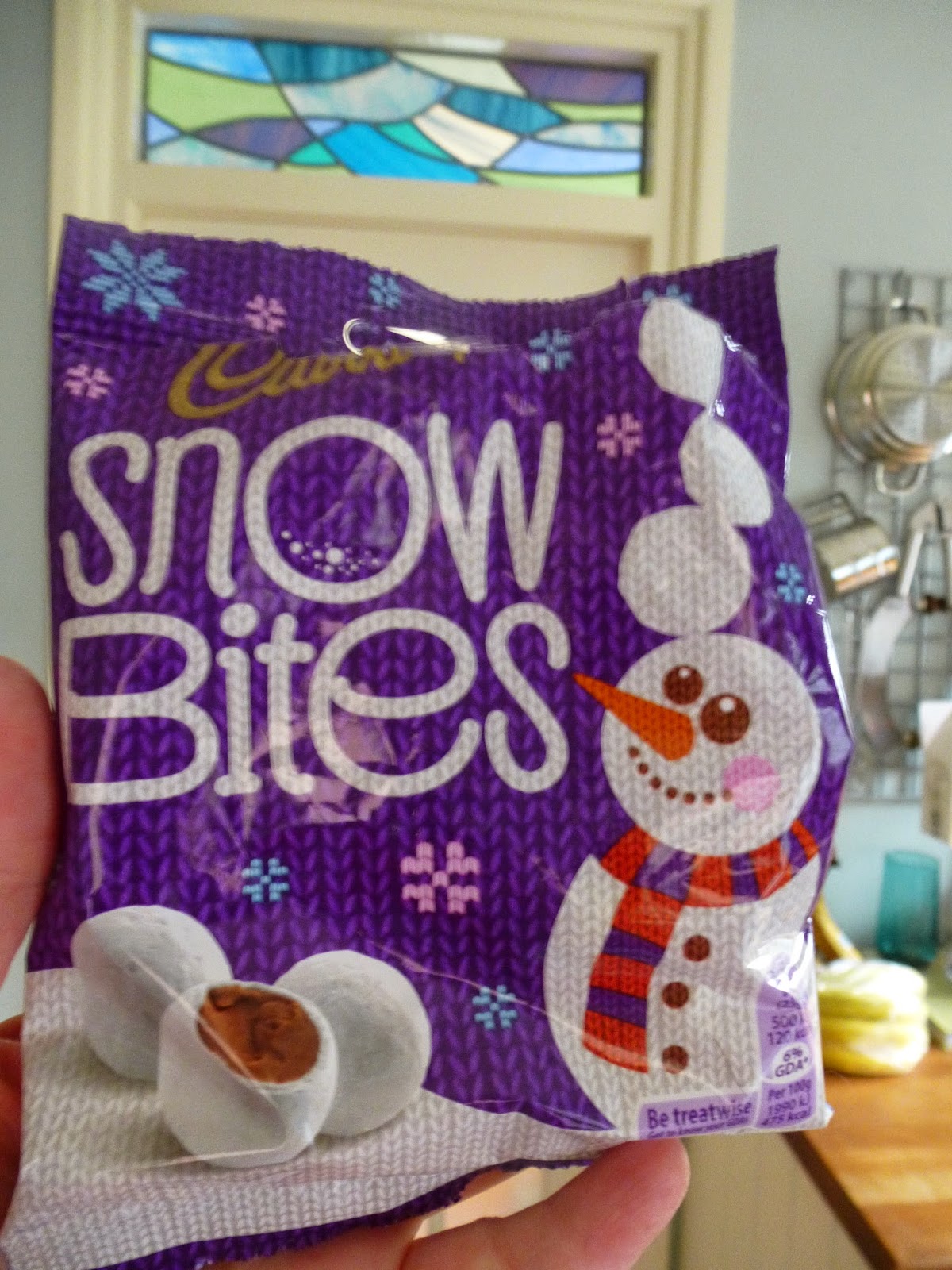 If you've managed to make it through all those photos, have a gold star! I'll be back next week to show you how I get on with my wreath. Until then, have a great week. x

Posted by VeggieMummy at 06:23