I was never one for sport in school. There were those who were rarely seen outside lessons when they weren't wearing some sort of track suit/ sports gear. Not me, oh no, I was the one having the 5 year period! Our 'O' and 'A' levels (yes, I am that old!) were held in the gymnasium and I remember my PE teacher, who happened to be invigilating, commenting that it was the longest amount of time that I had spent there in 7 years! I quite liked hockey, despite the compulsory wearing of PE shorts and thin airtex blouse in sub-zero temperatures. I wouldn't have minded so much if the PE teacher hadn't been wearing enough layers to make an eskimo envious.

I do feel that I would have been very good at synchronised swimming - I've never tried it mind, but I'm very synchronised when I practise by myself in the bath. None of that putting my head under the water nonsense, but I have the straight leg and pointy toe bit down to a fine art!

These days, after a brief flirtation with running, I stick to yoga every morning, walking, and swimming 40 lengths 3 times a week. I hope that's enough exercise as I have no desire to do more. Classes at the gym seem to involve some kind of social interaction whilst waiting for them to start and I've never been very good at that sort of thing. It's too reminiscent of all the mums at pick up time! I'm perfectly happy to exchange a watery hello and a comment on the water temperature or 'Tsunami Man' with the pool regulars, but that's about as far as it goes.

So, it's rather strange that I quite enjoy watching sport. Wimbledon has me glued to the set for 2 weeks every year and I quite like watching rugby and snooker too. My Dad was a big fan, so I think he got me interested. Cricket goes over my head, although I quite like the idea of sitting in a chair on a summer's day with a picnic and something vaguely alcoholic to hand, and football leaves me furious; the players seeming to fall over clutching something, with Oscar-worthy drama, every time someone comes near them.

Every 4 years (or 5 in this case) when the Olympics comes round I show an initial marked lack of interest - even when it was held in London. Other people were rushing to order tickets and making an effort to see the Olympic torch pass by and I really couldn't have cared less. Then there's that moment when I sit down with a cup of tea and happen across it on the TV by accident and that's it ...... I'm hooked! Suddenly, I'm an expert and sports that I've shown a complete lack of interest in before - BMX, who knew?! - have me gripped. I'm pointing out my favourite Olympians to R, cheering loudly for anyone wearing a GB vest, getting over-emotional about show-jumping (me, who's usually terrified on a horse!) and joining in with diver Tom Daley as he sobs during the National Anthem. I'm an emotional wreck. The only downsides are R complaining constantly about the presenter - naming no names - who is a stranger to the letter 'g'  (we have swimmin, runnin, cyclin, divin - you get the idea), the misogynistic rules regarding the women's beach volleyball outfits and the NZ weightlifter Laurel Hubbard - don't get me started!

So, that's my entertainment sorted for the foreseeable future. A cup of tea, my knitting and something sporty to cheer on and I'm a very happy bunny.

We have managed to squeeze in a few other activities lately:

A trip to Slimbridge Wetland Centre. It was brilliant, although, rather sadly, one of our favourite bits was hand feeding the pigeons! 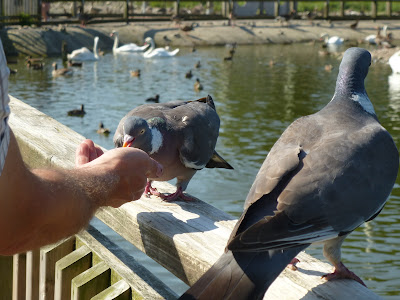 The moorhens were very tame too. We have them in the garden and they come to the back door to be fed but they're not tame enough for this: 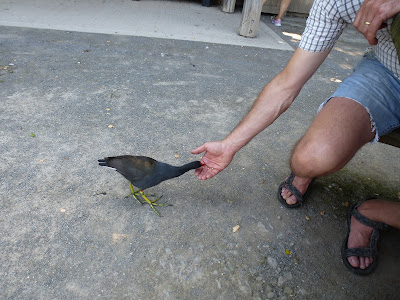 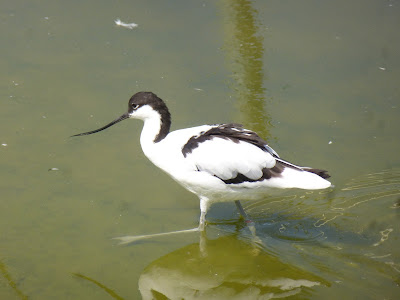 My personal favourite - the flamingos. I could have sat and watched these all day. By happy chance, Michael Morpurgo was on Radio 4's 'Tweet of the Day' talking about flamingos soon after our visit. He too is enchanted by them. Apparently, there is something about the noise they make that speaks to his soul. I know just what he means. 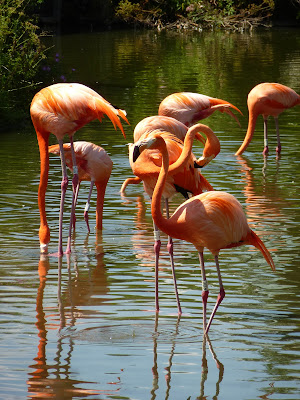 I was also impressed by the hides dotted around the place. I could see myself spending a cold or rainy winter's day, hunkered down in one with some binoculars, a packed lunch and a thermos of hot tea. So cosy!

Last week we watched the 2005 version of 'Pride and Prejudice' on the TV. The one with Keira Knightly as Elizabeth and Matthew Macfadyen  as Mr. Darcy. I've seen it before but I still loved it. It's an all star cast, the cinematography and music are excellent and (say it in hushed tones...) I think I prefer it to the Colin Firth version! R looked up the various locations where it was set and discovered that a lot of it was filmed at Stourhead, the NT estate in Wiltshire. Looking for a destination for a day trip at the weekend, we decided to pay it a visit. I packed up a picnic and we set off. Not far into our journey, the heavens opened. We stopped in a lay-by to put up Bridget's hood and continued grimly on. It was still Biblical when we arrived and we ate our sandwiches in the car whilst peering glumly out, looking for a patch of blue sky. This wasn't the weather that Metcheck had promised! 2 Sandwiches, a couple of oranges and a flask of tea later, it miraculously cleared up. On went the walking boots and, armed with the golfing umbrella (Nope, we've never played that either!), we set off. The grounds were beautiful - 1072 hectares of glorious scenery, studded with a Pantheon, 2 temples and a Gothic  Hansel and Gretel style cottage. 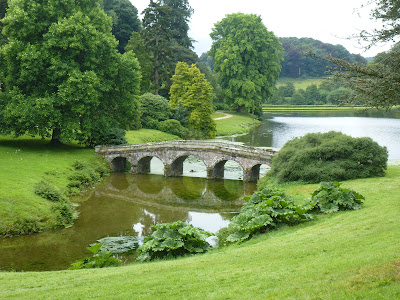 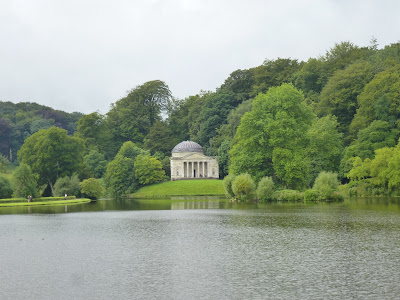 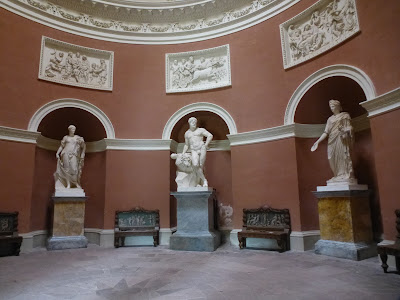 The roof and oculus are similar in style to the Pantheon in Rome: 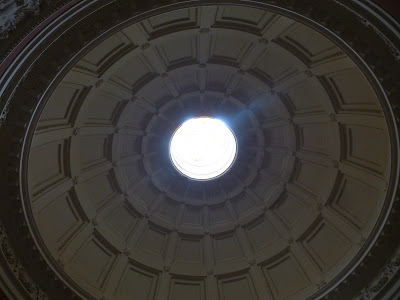 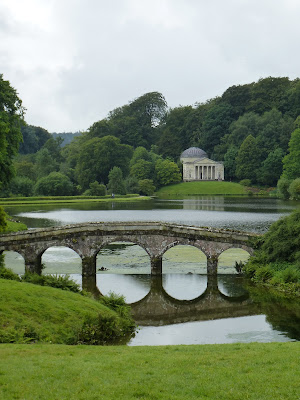 View from the Pantheon: 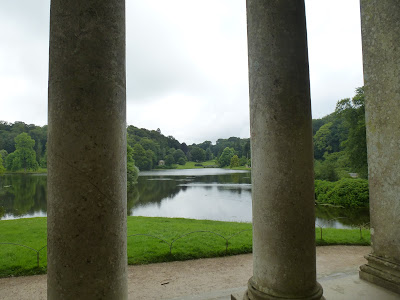 The Temple of Apollo - Mr. Darcy makes his first proposal in the film here! 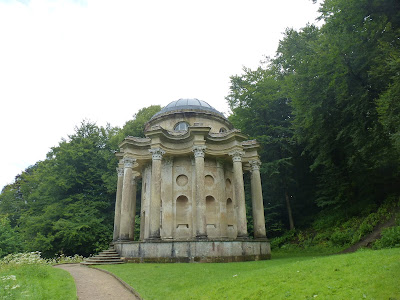 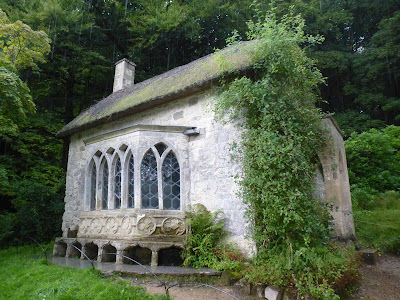 The house itself was rather glorious as well. My favourite room was the library. Sadly, the kitchens (usually my favourite bit of any NT property) were out of bounds. 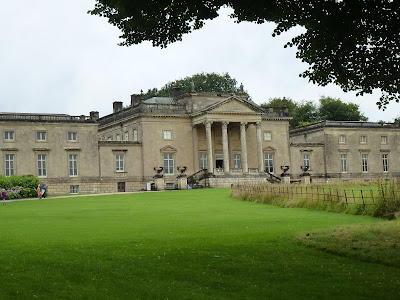 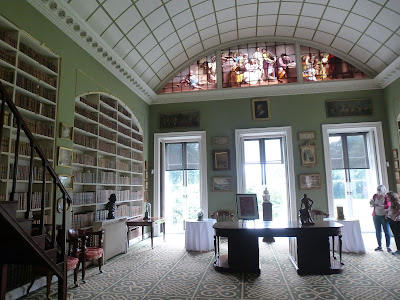 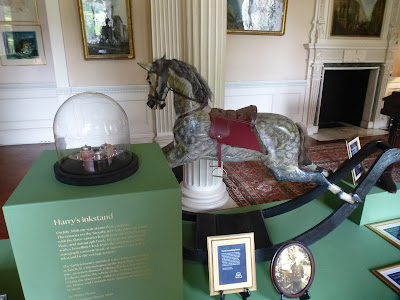 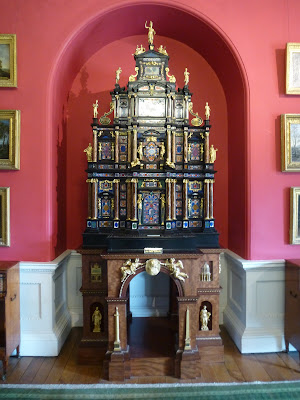 The walled garden and greenhouses were a treat too. 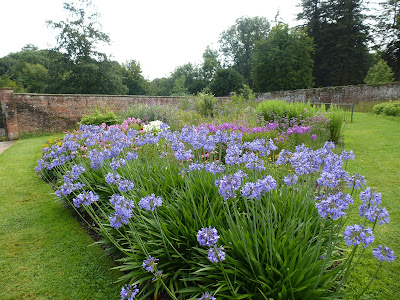 It was a lovely day out and I'm really glad we persevered. The rain made a forceful comeback when we were halfway round the lake, so we were very grateful for that umbrella!
Newbury's combined Garden Show and 'All about Dogs'.
For a mere £2, you could 'Hug a Pug' to raise money for the rescue centre. It was the best £2 I've spent in a while. They were absolutely adorable! On entering the pen, they all beetled over for a cuddle - all that is except Harry (see photo below on right), who was born with myelitis and had paralysed rear legs. For out and about he has a little carriage on wheels for his rear end! Some had been rescued from as far away as China, where they were being sold in a market. :O(
I had to change as soon as I got home as they were quite moulty and Hamish didn't appreciate the smell of dog! 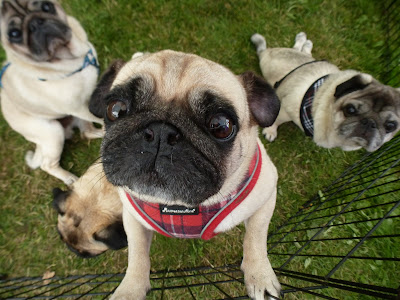 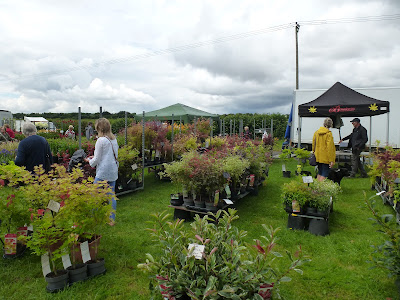 An outdoor performance of 'Romeo and Juliet' at Shaw House. It was a lovely evening out - we took a picnic and Gs&T in tins! The only bad bit was after the interval when, as dusk descended, the midges came out. Great clouds of them had the audience swatting surreptitiously. I was wearing a jacket but the following day I counted 25 bites on my forehead and umpteen on my hands and wrists. Next time - insect repellent! 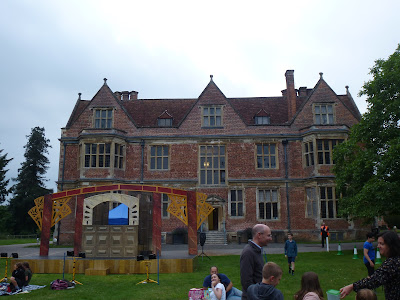 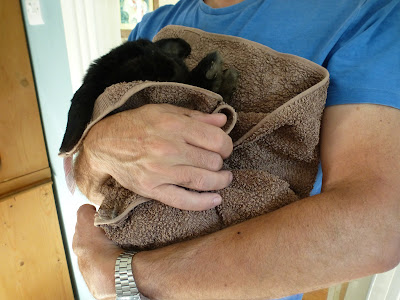 Last but not least, another photo of Bert and Ernie. This one is a little out of date - they have now grown and it turns out that they are actually Bertha and Ernestine! 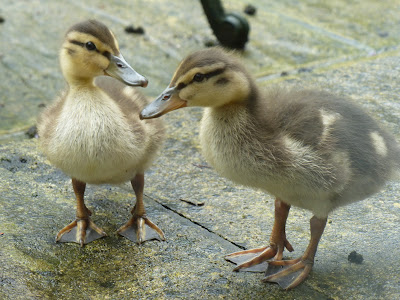 Well, that's all for now. Anyone been up to anything exciting recently? Anyone else similarly obsessed with the Tokyo 2020 Olympics?  Yes, that date keeps messing with my head as well!
Toodle pip for now. x
Posted by VeggieMummy at 07:39