Hello there! Well, it's that time of year again when I become rather obsessed with the happenings in SW19. I missed most of the first week of Wimbledon as E was home and she isn't too keen on tennis. The one silver lining of her going back to Bristol is that I now get to spend most afternoons watching Murray et al hitting balls across perfect, stripy lawns. I whizz through all my jobs in the morning, saving the ironing, and anything else that can be done with half an eye on the screen, for after lunch.

There have been a few happies in between:
The bad mother duck has had a second clutch (is that the right word?) of ducklings. She started off with 10 and the number has gradually dwindled to 3. To give her her due, a light seems to have gone on in her little, ducky brain and she is actually taking quite good care of the remaining 3. She has stopped abandoning them to follow the male and no longer pushes them out of the way to get to the food. In fact, she will chase away the other ducks until her ducklings have finished eating. With the hot weather I have the patio doors open most of the time. Whilst cooking the other day, I heard a commotion in the dining room and went in to find the mother and ducklings pottering round, having a good nosy. They have since made rather a habit of this. There have been no ducky accidents of the poop kind yet, but I'm sure it's only a matter of time! 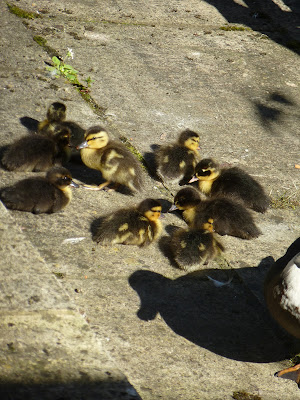 Another talk and walk at the museum. This time, it was all about swifts and it was really fascinating. We already have a swift box at the back of our house, but the West Berkshire Ornithological Club are giving away free boxes to local residents in an attempt to boost numbers. I have applied for another one and may even try their recording of swifts calling to attract them - not sure what the neighbours will make of that! 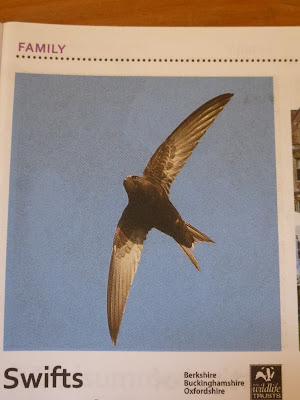 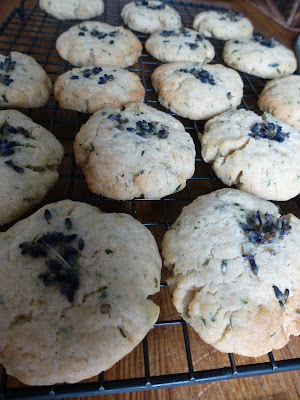 It was a friend's birthday a couple of weeks ago and so a few of us took her out for lunch at a local gastro pub. After lunch we went back to another friend's house for coffee in the garden. J's house is a picture perfect cottage, complete with thatched roof and a garden to die for. I am green with envy! In her paddock she has a grass labyrinth that they designed and created for her youngest daughter's wedding last year. We had fun walking it - it didn't look huge on first inspection, but it was so intricate that it took a lot longer than you would think. 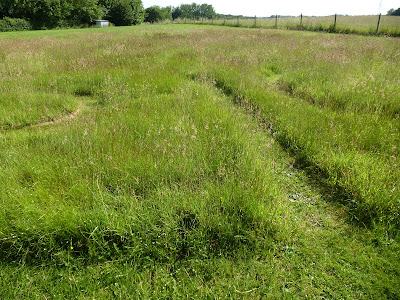 R and I took a trip to Mottisfont Abbey. We have driven by here before, but this was our first visit. We were about a week too late to see the roses in their full glory, but it was still lovely. R was a little confused initially as there were lots of dead heads on the plants. Then a sign informed us that many of the old fashioned roses only have a single flush of blooms and they leave the dead heads in order to get the hips in autumn. 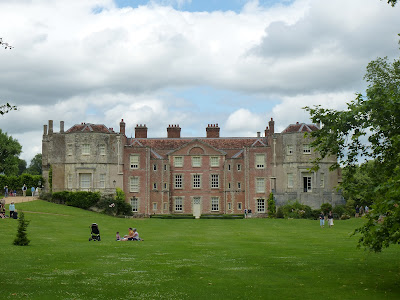 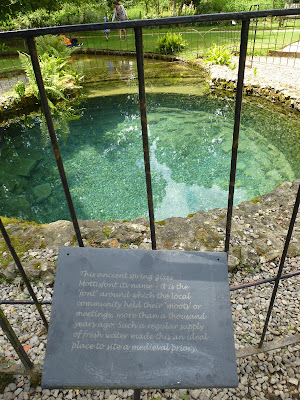 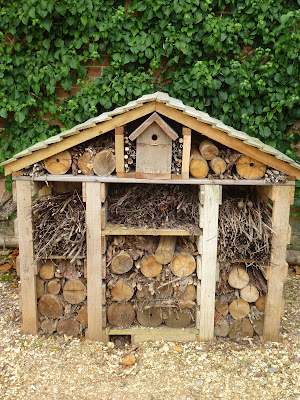 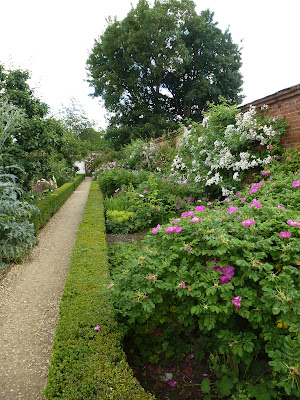 I moved E into her new flat in Bristol. Her room is lovely and is the only one in the whole house with access to the garden - I don't know if that means that she will have to tend it! After humping numerous boxes, unpacking and risking life and limb climbing on the furniture to put fairy lights around the room, we treated ourselves to dinner at Falafel King. It was also a bit of a celebration as she had just found out that she had got a First in her degree. Very proud Mummy moment! 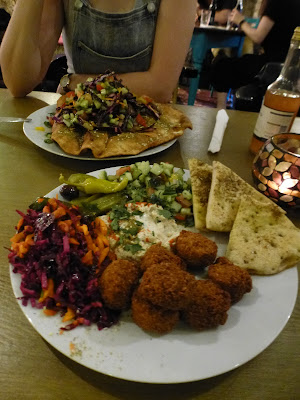 L's boyfriend, J, has a birthday coming up soon. L had told me that he had lost his hat recently so, despite the fact that his birthday is in August, I knitted him a new one. My reasoning was that if I waited until Christmas he would have had cold ears for a good couple of months! I plan on making him matching gloves for Christmas. We are having a 'Recycled' Christmas this year. All presents have to be either homemade or bought from charity shops, car boot sales etc.  I'll let you know how it goes! 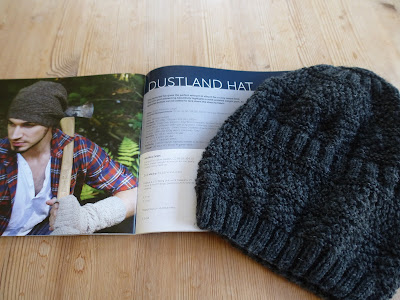 A trip to the Watermill Theatre to see Sir Ian McKellen. He is doing a tour of the country to celebrate his 80th birthday. We were very lucky to get tickets. Initially we missed out as they all sold within the first 3 minutes of going on sale. They put us on the waiting list and we were thrilled when we received a call saying that someone had dropped out and would we like 2 tickets. YES, PLEASE! 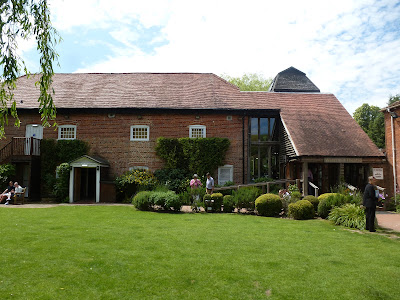 He was absolutely brilliant and you would never believe that he is 80. He also stood at the exit with a collecting bucket at the end of the show to raise money for the Watermill's charity of choice this year. 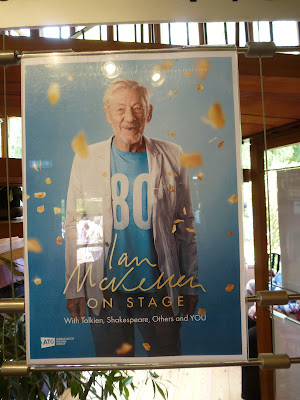 I've picked numerous posies of sweet peas for the table: 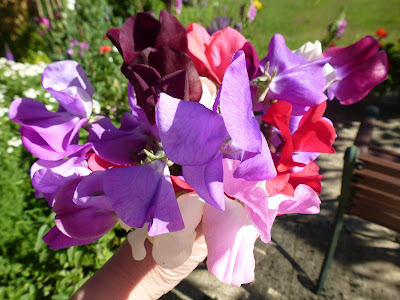 .....and admired my geraniums - or are they pelargoniums? I love the smell of these; they remind me of my Mum who always used to grow them in her little lean to. One of the buckets I bought at a car boot sale. The other 2 we found on a walk when we came across a pile of rubbish that people had dumped near a river. L bravely climbed over the detritus to get to them and R braved the funny looks as he carried them the rest of the way home! 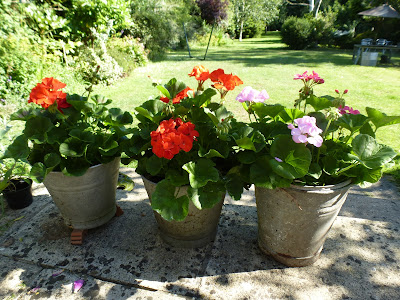 I finally got around to making bunting to go on the shed. Amazingly, R doesn't mind it too much! I also planted up an old sink with alpines. I'm hoping it will get enough sun where it is. 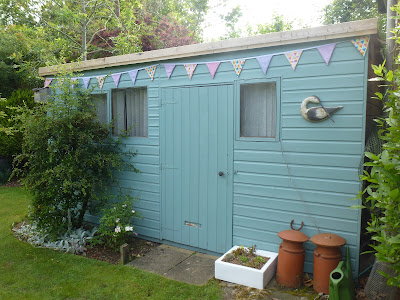 Finally, I tried my hand at rag rug making. I like how it feels underfoot but am finding it tricky to know where to increase at the ends. Knowing that I was going to be doing this, I collected together some old pillow cases and also bought an old sheet from Oxfam, thinking that the colours would look good. It was only when I got it home that I noticed the strong smell of moth balls! It has been washed twice but there is still a faint whiff of naphthalene. I'm hoping it will fade with time. 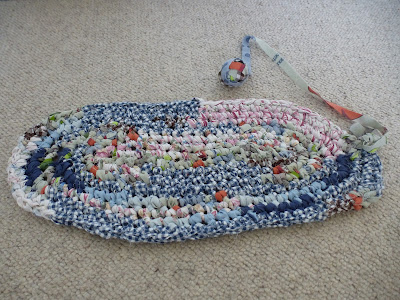 Well, that's all for this week. I'm just off into town as there is a pop up zero waste shop happening today and I need to stock up on sesame seeds and nuts. I can't be too long though - that tennis won't watch itself!

Toodle pip for now. x
Posted by VeggieMummy at 01:44