Not such a Happy Friday!

Hello everyone. I'm hoping that you are all having a much better Friday than I currently am. The lurgy has struck with avengence and I am currently bed bound clutching my little hot water bottle. R kindly did the school run for me this morning, as I didn't dare to stray too far from the loo! All is calm at the moment though, so I thought I'd do my Friday Happy post for Planet Penny.

My favourite happy moment of the week has to be my camellia which is flowering its little heart out. Actually, I'm not entirely sure whether it is, in fact, a camellia or an azalea. I tend to get the 2 confused but, unless anyone would like to tell me otherwise, I'm going to run with camellia. After a mild spell, its buds were just starting to open and then we had the snow. I was worried that it would be too much and it would lose all its flowers before they had a chance to get going but, fortunately, it appears to be a hardy little thing. I couldn't resist nipping outside to take a picture against a rare bit of blue sky. The pink/blue combination always makes me happy. 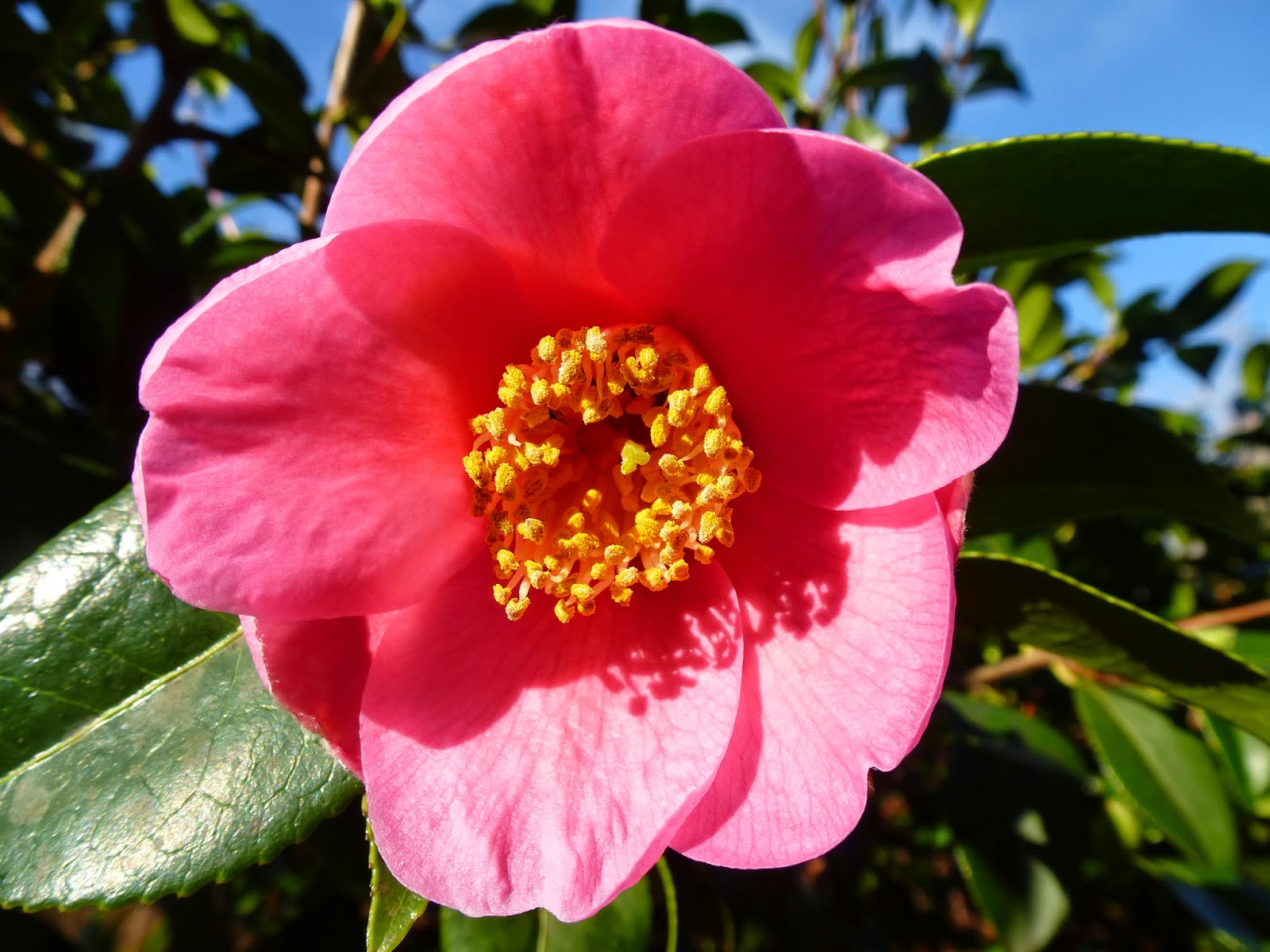 We have another similar one, but it's further away from the house and much smaller - it's even smaller still now that Bambi et al have discovered it. They really are wreaking havoc on the plants at the moment.

Other happies this week include:
Making some rocky road for E. She has AS level mocks and her Grade 8 piano exam looming. The stress is starting to tell, so I thought a little chocolatey comfort might go a long way. I like to make them in little clusters, rather than slices, but I admit they do have certain 'presentation' issues! They have pecans, rich tea biscuits and veggie marshmallow in them and are really rather moreish. 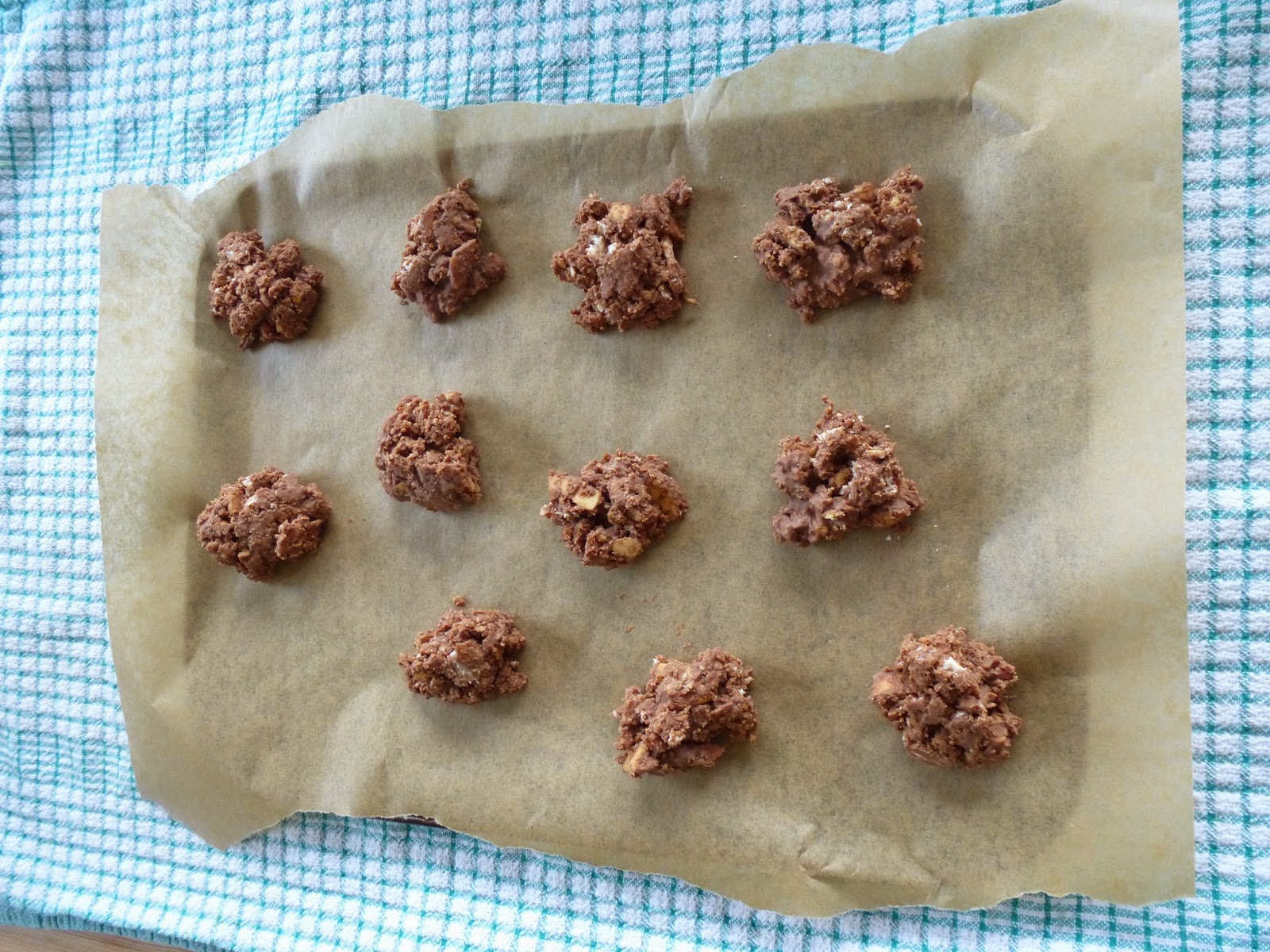 This little find at one of the local charity shops has transformed my knitted block making. Whenever I get to the end of the row, I just whizz the dial round one and it keeps track of where I'm up to. For someone like me with a memory like a sieve, it's revolutionary! Who would have thought that a 50p pair of stitch counters (there is a smaller version too for if I eventually find time to knit that pair of socks!) could bring me such pleasure? 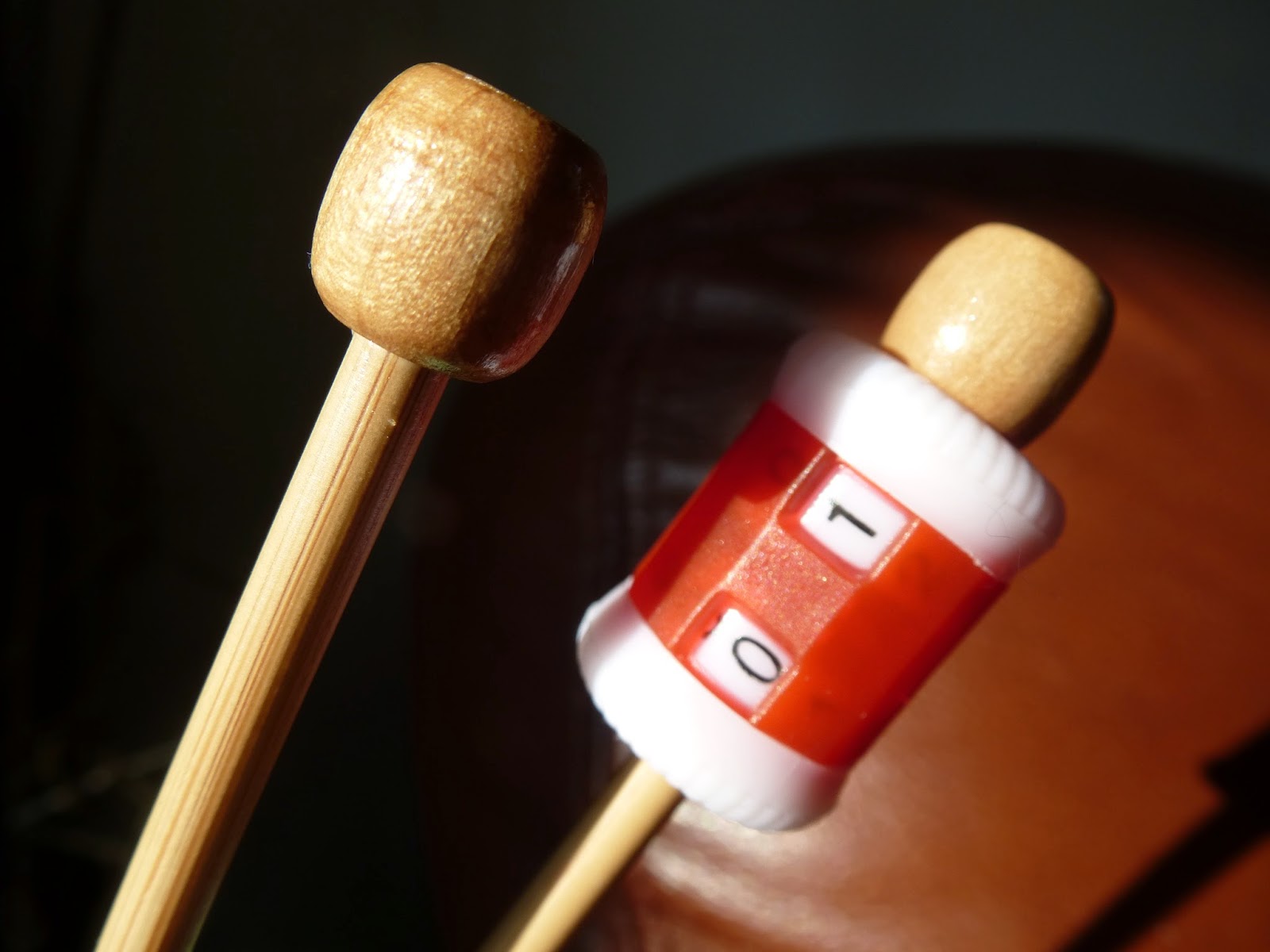 This little book came from the same shop and I'm looking forward to trying it out when I'm feeling a bit better. It was my first WI meeting as a fully paid up member this week, so it seemed appropriate! The fleecy blankie it's sitting on was also a thrifted find. I bought it to back my knitted block picnic blanket when it's finally finished. 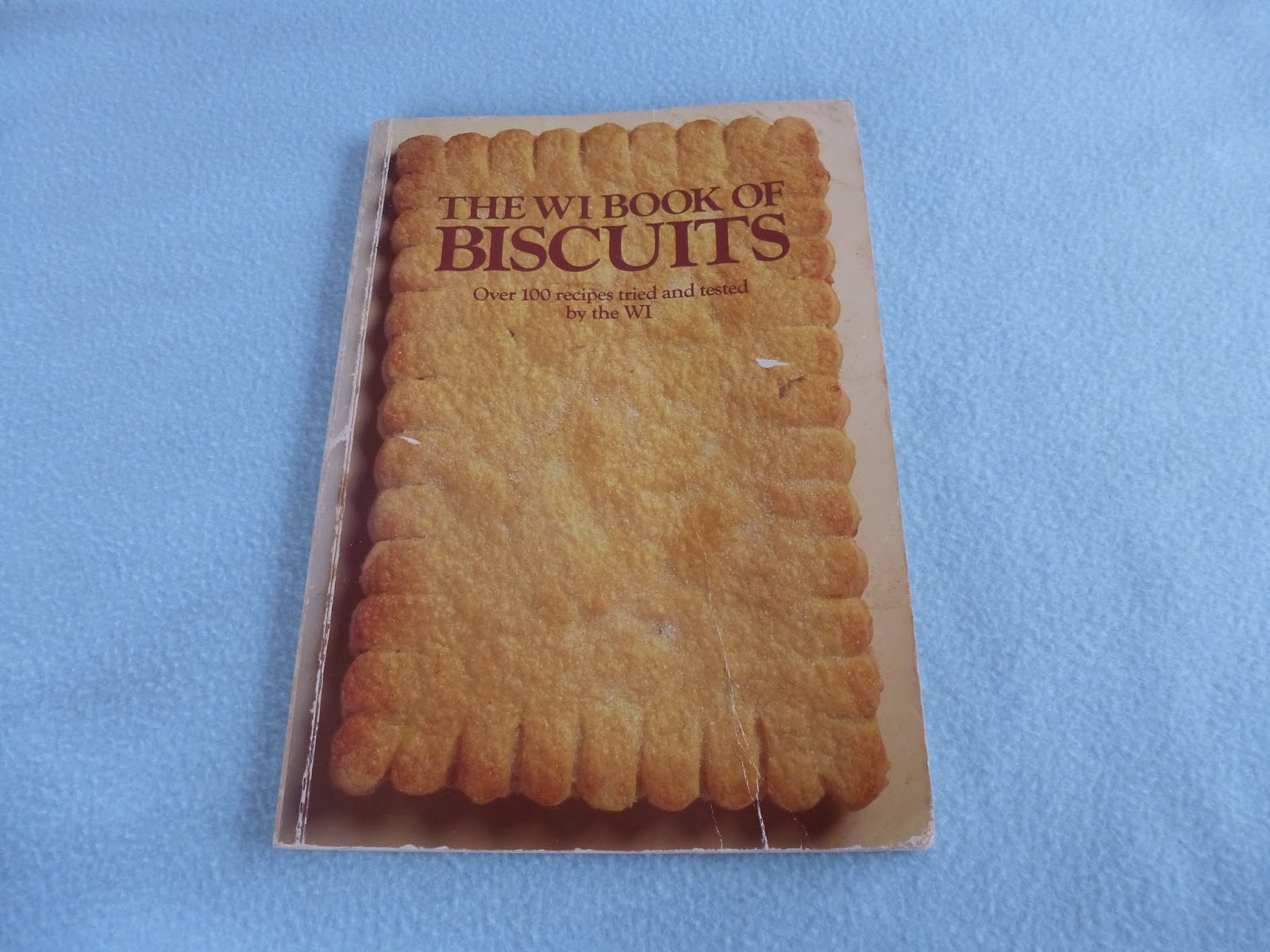 My new mug from T K Maxx. The tulips in the garden aren't quite here yet, so while I'm waiting I'll have to be content enjoying this: 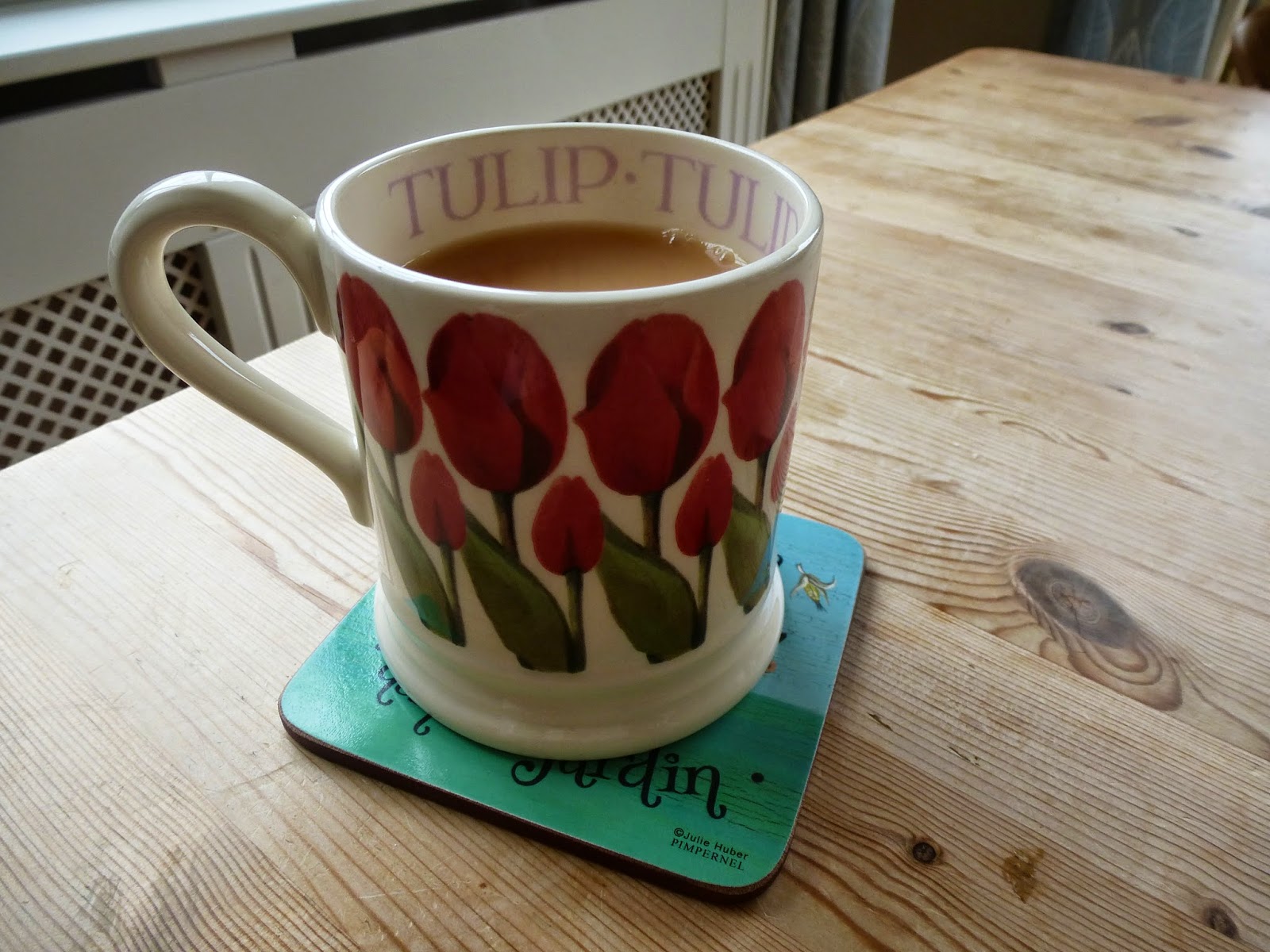 This little beauty is my new discovery - Village Fabrics, the patchwork and quilting shop, in Wallingford near Oxford. I was too embarrassed to take any photos inside (wimp that I am) but believe me, it's a little Aladdin's cave of treasure and well worth a nosy if you're ever in the vicinity. If not, next time I promise to be braver and get my camera out. 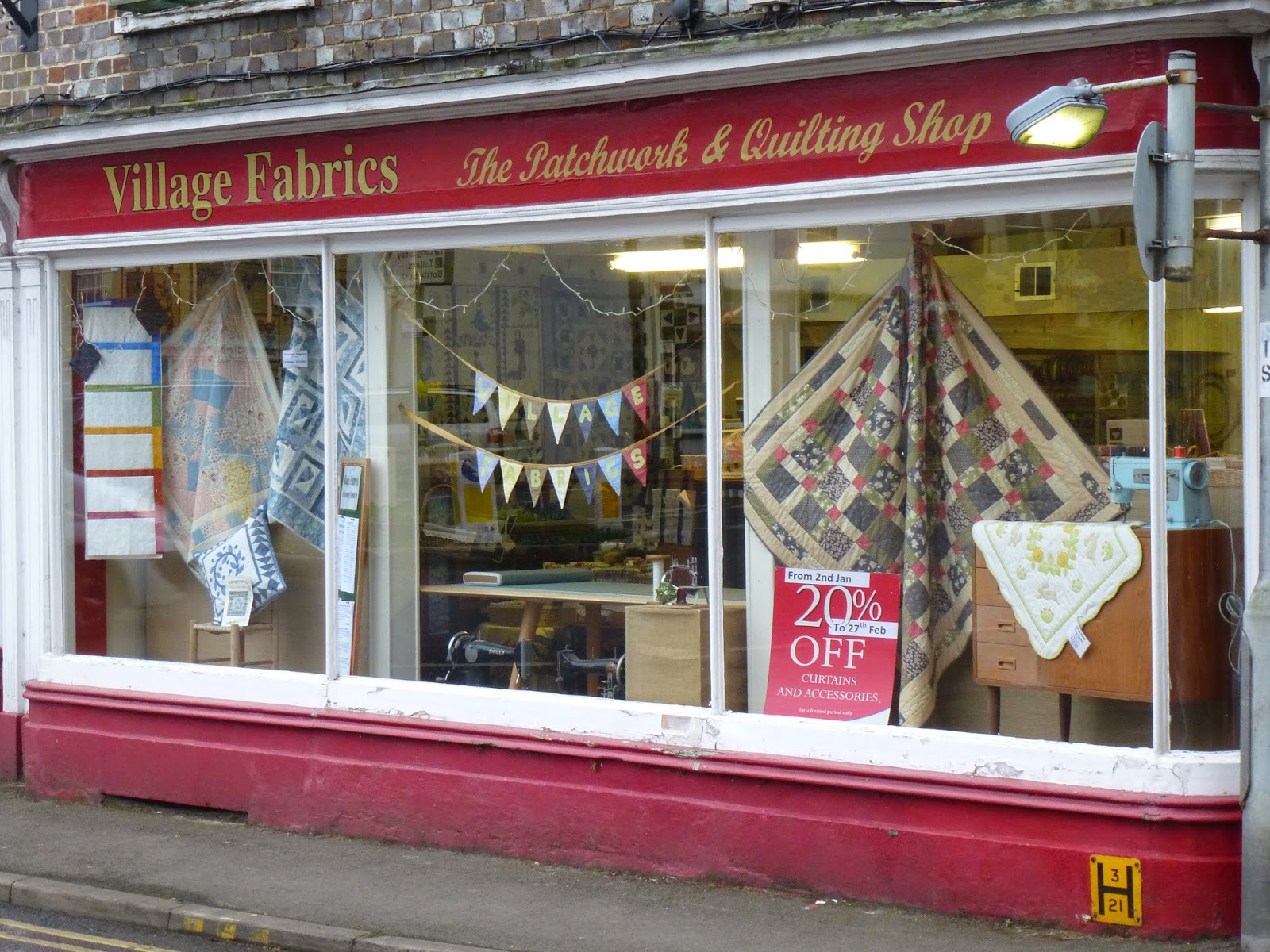 I bought a few fat quarters to add to my stash. They're not my usual colours, I admit, but they're for a very specific project that I hope to be able to share with you next week. I've added a few scraps I already had to the pile in preparation. 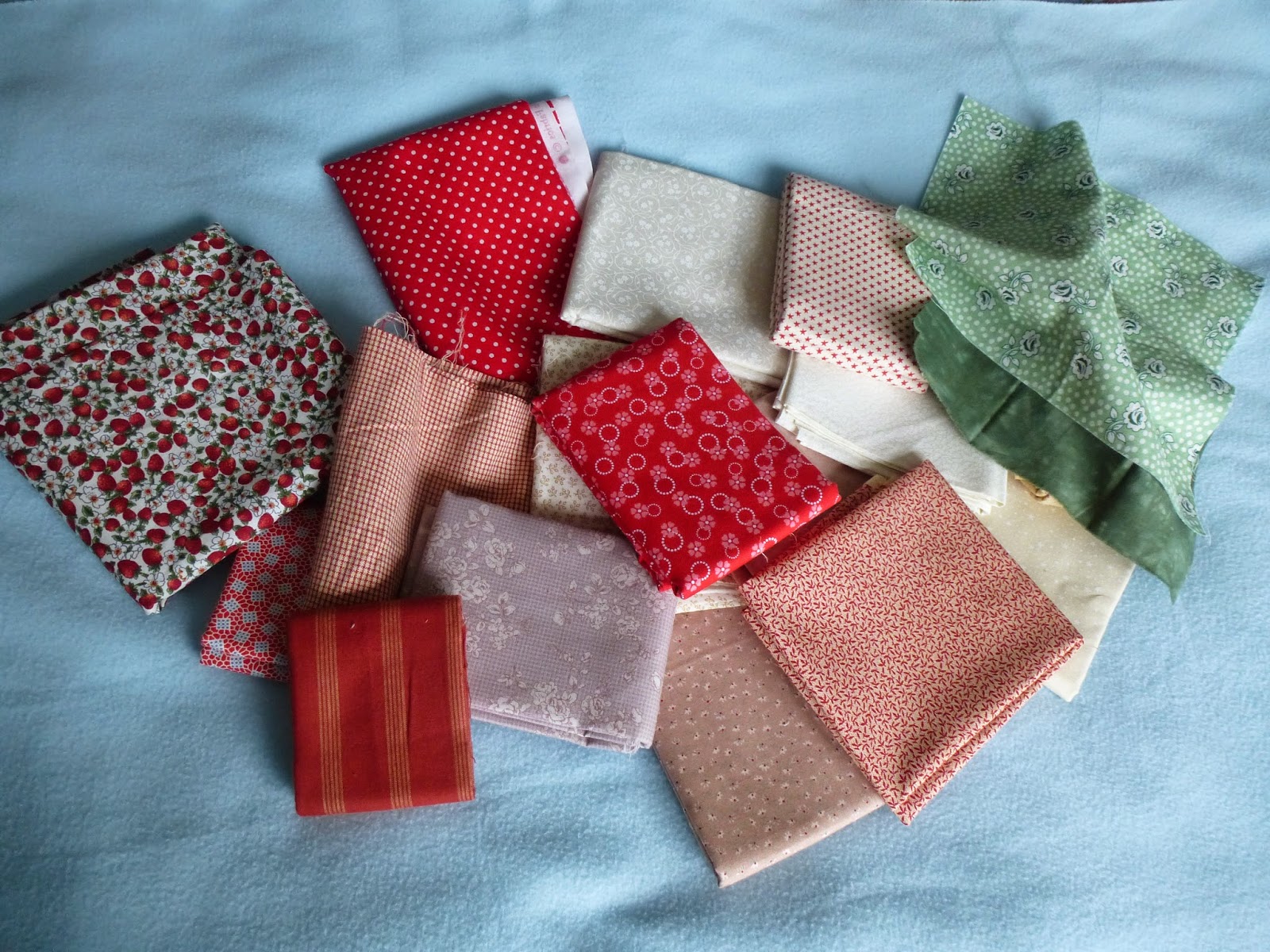 Finally the loaf of the week - Pain de Campagne. It's a mixture of strong and rye flour with added oregano. It was supposed to be fresh oregano but Bambi had been at it again, so dry it had to be. 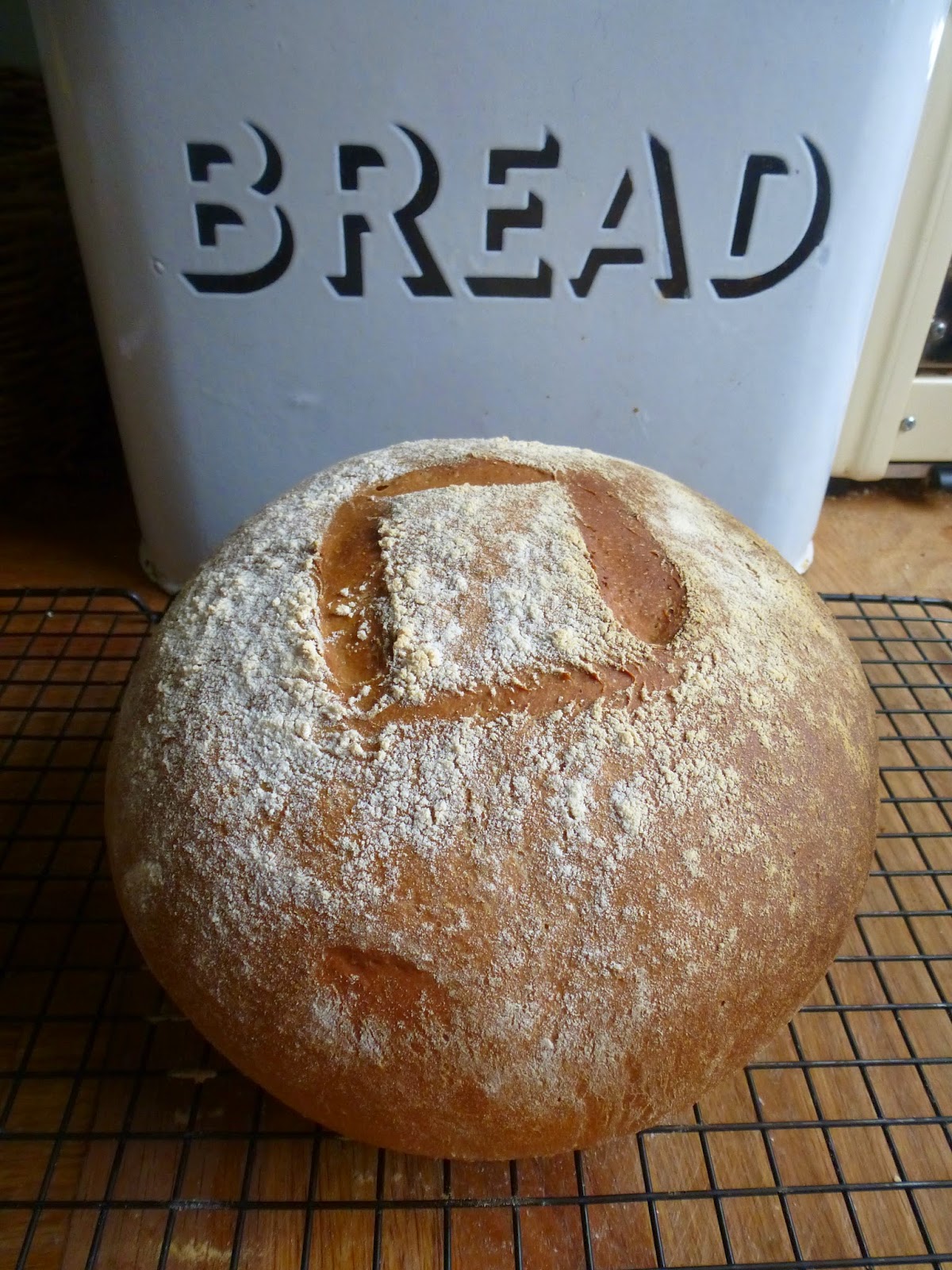 That's all for this week. It's our Half Term holiday next week, but I imagine a lot of it will be spent watching E revise and listening to piano scales ........... wishing yours is more exciting.
Toodle Pip for now. x

Posted by VeggieMummy at 02:59